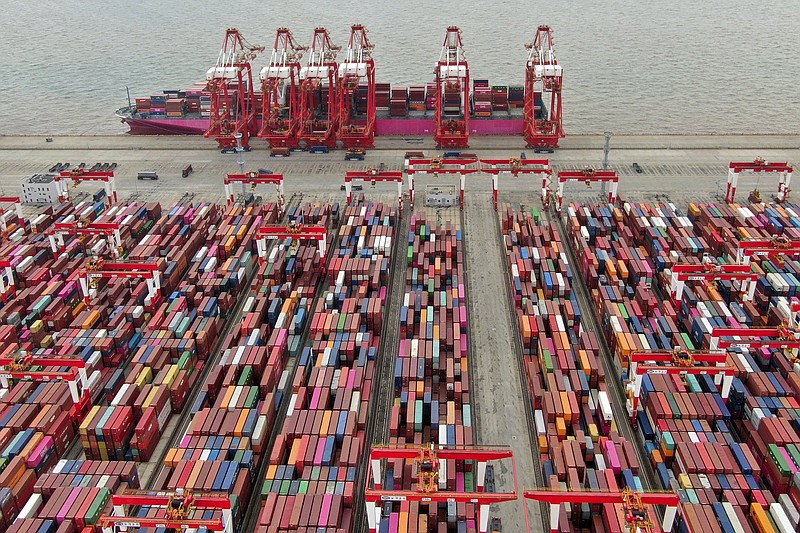 The Yangshan container port is seen in an aerial view in Shanghai, China, in this July file photo. China has applied to join an 11-nation Asia-Pacific free trade group in an effort to increase its influence over international policies. (AP)

Beijing has applied to join an 11-nation Asia-Pacific trade pact once pushed by the U.S. as a way to isolate China and solidify American dominance in the region.

Commerce Minister Wang Wentao submitted an application to the trade minister of New Zealand as a representative of the Comprehensive and Progress Agreement for Trans-Pacific Partnership, the Commerce Ministry announced Thursday.

The treaty, originally called the Trans-Pacific Partnership, was envisioned by the U.S. as an economic bloc to counterbalance China's growing power, with then-President Barack Obama saying in 2016 that the U.S., not China, should write the regional rules of trade. His successor Donald Trump pulled out of the deal in 2017, with Japan leading the revised and renamed pact to a successful changeover the following year.

If China joins, that would quadruple the total population within the group to some 2 billion people.

The application is certain to spark a reaction from Washington, where a number of lawmakers had already expressed concern about China's efforts to join. There have been no signs that the administration of President Joe Biden is interested in rejoining the deal.

The application is the result of months of behind-the-scenes discussions after President Xi Jinping said in 2020 the nation was interested in joining. China is the second country to apply to join the deal, after the United Kingdom asked to become a member earlier this year.

"It's a perfectly rational calculation by the Chinese leadership," said Hosuk Lee-Makiyama, director of the European Centre for International Political Economy in Brussels. "Given how the Chinese market is driving the economic recovery, their cards will never be this strong again. Or rather, the cost of rejecting China's application will never be this high."

The application underlines the increasingly complicated geopolitical situation in Asia, where China is the dominant economy and main trading partner for many, but competition with the U.S. is getting worse.

Australia, Singapore, New Zealand and Japan are pact members and close allies of the U.S. Along with China, they're also members of the Regional Comprehensive Economic Partnership -- a 15-nation Asian trade pact that was successfully negotiated last year.

Military and diplomatic tensions between China and Japan, the largest economy in the Comprehensive and Progress Agreement for Trans-Pacific Partnership, have been increasing because of China's increased military presence around islands that both nations claim as their own, Chinese threats to Taiwan, and other factors.

Regarding China's application, "Japan must look properly at whether it is ready to reach the high level of TPP," Foreign Minister Motegi Toshimitsu said Friday in Tokyo.

"We will confer with other member countries and deal with this, taking into account strategic issues," he said, adding that the U.K.'s application would be dealt with first.

Taiwan had also expressed interest in joining pact and had been talking with members of the group, with some Japanese ruling party lawmakers last month supporting Taiwan's entry. However, the Chinese application will complicate that as Beijing opposes Taiwan joining any international organization or group.

The bid from China to join the pact was made less than a day after Australia, the U.S. and the U.K. announced they would form a more cohesive defense arrangement to offset China's rising military prowess. China attacked that agreement, but it will now need to negotiate with Australia and probably the U.K. about accession to the pact.

Any talks won't be simple -- China and Australia are already in the midst of an economic and trade dispute, which has seen Beijing apply tariffs or block billions of dollars of Australian exports, despite the two nations having a free-trade agreement.

Australian Trade Minister Dan Tehan said Friday that all 11 member nations would need to be in agreement for negotiations to start, and pointedly noted China would have to talk directly to the other nations.

Canada is another pact member that's in a dispute with China, with one Canadian citizen jailed for 11 years and another still awaiting sentencing in cases that are seen as linked to the arrest in Canada of the daughter of the founder of Huawei Technologies Co.

A number of members of Congress have been calling for the U.S. to either rejoin the pact or to be more active on trade diplomacy in the region. However, the Biden administration hasn't announced any concrete trade policies for the region, although there are reports it's discussing a digital trade deal covering Asia-Pacific economies.

"The future of technology, trade and defense is either going to be led by the Chinese Communist Party or by the United States and our allies," U.S. Sen. Ben Sasse, R-Neb., said in response to the news. "If China sees the value in building alliances across the Pacific, why can't the United States? Let's get back into a position of leadership instead of retreat."

A former U.S. trade official said China's membership in the group isn't assured given its trade regime and direction toward more central control of its economy.

"It's extremely difficult, if not impossible, to see how they could embrace the CPTPP rules governing state-owned enterprises, labor, e-commerce, the free flow of data, among others, as well as comprehensive market access commitments," said Wendy Cutler, vice president of the Asia Society Policy Institute and a former acting deputy U.S. Trade Representative.