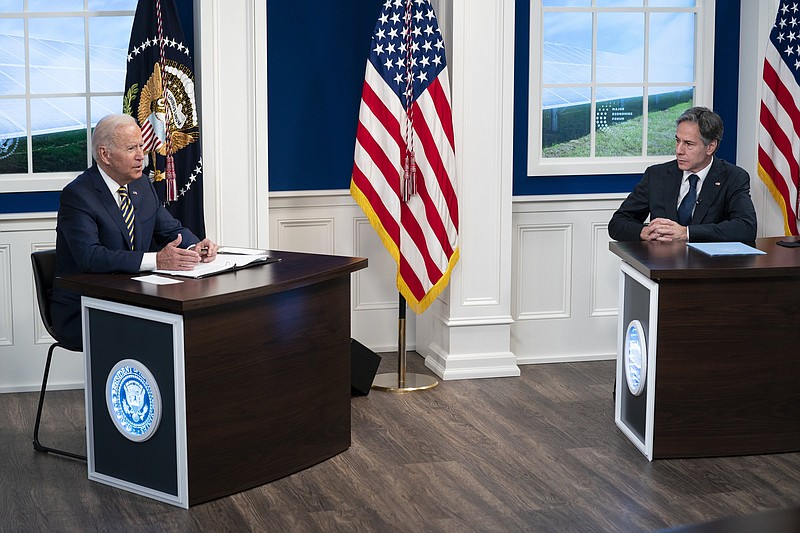 President Joe Biden, with Secretary of State Antony Blinken nearby, delivers remarks Friday on the White House campus at the opening of the virtual Major Economies Forum on Energy and Climate. “We have to act and we have to act now,” he said. (AP/Evan Vucci)

WASHINGTON -- President Joe Biden tried on Friday to hammer out the world's next steps against rapidly worsening climate change with a small group of other global leaders and announced a new U.S.-European pledge to cut climate-wrecking methane leaks.

Ever-grimmer findings from scientists this year that the world is nearing the point where the level of climate damage from burning oil, gas and coal becomes catastrophic and irreversible "represent a code red for humanity," Biden said at the session's outset.

"We have to act and we have to act now," Biden said, speaking on a specially erected White House set that showed virtual arrays of solar panels in the background and a wall of other global leaders listening on screens.

The meeting was held as the United Nations released a new report Friday that shows the world is on a "catastrophic pathway" toward a hotter future unless governments make more ambitious pledges to cut greenhouse-gas emissions.

The U.N. report, reviewing all the national commitments submitted by signatories of the Paris climate accord until July 30, found that they would result in emissions rising nearly 16% by 2030, compared with 2010 levels.

Scientists say the world must start to sharply curb emissions soon, and add no more to the atmosphere by 2050 than can be absorbed, if it is to meet the most ambitious goal of the Paris accord -- capping global temperature rise at 1.5 Celsius (2.7 Fahrenheit) by 2100.

The planet already has warmed by 1.1 Celsius since pre-industrial times, experts said.

Biden, in the public opening of the otherwise private talks, hailed a new U.S. agreement with the European Union aiming at cutting the two entities' emissions of methane 30% by the end of this decade. Methane, the main component of natural gas, is one of the most potent agents of climate damage, gushing up by the ton from numerous uncapped oil and gas rigs, leaky natural gas pipelines and other oil and gas facilities.

Biden evoked the "damage and destruction" he had seen in the United States, flooding in Europe and other global damage from the warming climate. He cited his trips earlier this month to California, where firefighters are battling larger, fiercer and deadlier wildfires almost year-round as temperatures rise and drought worsens, and to the northeastern U.S. and Gulf Coast, where Hurricane Ida and its flooding killed scores, as natural disasters increase in number and severity under climate change.

As Biden spoke Friday, California firefighters were trying to stop fires from reaching ancient groves of sequoias that are thousands of years old and the height of high-rises.

The White House billed Friday's meeting as a chance for some of the world leaders to strategize how to achieve big, fast cuts in climate-wrecking petroleum and coal emissions. The administration also is trying to reestablish the United States' Major Economies Forum -- a climate group set up by former President Barack Obama and revived by Biden -- as a significant forum for international climate negotiations.

Friday's meeting followed a much bigger and splashier virtual White House climate summit in April that saw scores of heads of governments -- representing allies and rivals, and big economies and small -- making sweeping speeches about the need to act against climate change.

The list provided of Friday's attendees included only a dozen leaders: those of Argentina, Australia, Bangladesh, the European Commission, the European Council, Indonesia, Italy, Japan, South Korea, Mexico, the United Kingdom and the United Nations.

China, India and Russia, with the United States, are the nations that emit the most climate-damaging gases from the production and burning of oil, natural gas and coal.

There was no word on their leaders' taking part. However, the White House said in a statement that Biden had directed his climate envoy, John Kerry, to lead a minister-level climate session afterward with China, Germany, India and Russia. It gave no other immediate details.

Climate advocates have stressed the importance of the U.S. coordinating with Europe and Asia for a joint front in coaxing China, which emits more climate-damaging fumes than the rest of the developed world combined, to move faster on cutting its use of dirty-burning coal-fired power plants in particular.

Fred Krupp, president of the nonprofit Environmental Defense Fund, said cutting methane pollution is the single fastest, most effective strategy to slow the rate of warming. A 30% reduction in methane pollution should be only "the entry point for this critical conversation. Many countries can and should aim even higher," he said.

While methane is about 20 times more potent than carbon dioxide, it stays in the air only about a decade, which means cutting methane emissions achieves quicker climate action.

The U.S.-EU pledge occurs as the U.S. Environmental Protection Agency is set to propose stricter rules against methane emissions for the oil and gas sector, as laid out in one of Biden's first executive orders.

The new rules, expected in the next two weeks, are likely to be stricter than an Obama-era standard set in 2016. The Obama standard was reinstated in June after Congress took the unusual step of invalidating a Trump-era EPA rollback of methane protections.

The pending EPA rule is expected to restrict methane emissions from new and existing wells, including hundreds of thousands of older wells that are not subject to federal regulation under current law.