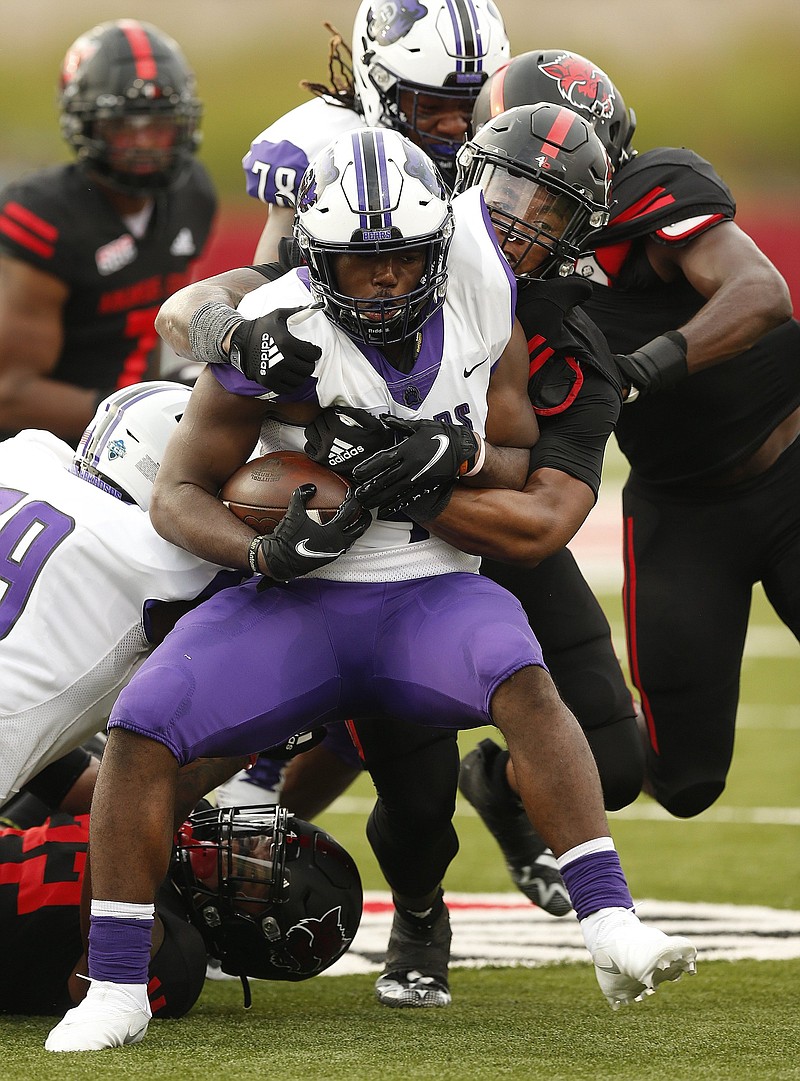 Darius Hale admitted to some nerves for Central Arkansas' season-opener against Arkansas State in Jonesboro.

"I knew I wasn't going to play my best game, because I just wasn't comfortable yet," Hale said.

It was the UCA running back's first taste of live action at the college level, and adding to it, teammate Cameron Myers, a junior running back who was expected to be the Bears' feature back this season, was limited, dealing with a lingering knee injury.

Hale, a Pearland, Texas, product, finished his first game with a team-leading 28 rushing yards on 13 carries. He was certain he'd play better the following week at Missouri State, he said, and he did, finishing the game with 66 total yards and two touchdowns, but he wasn't even the Bears' best rusher. Trysten Smith, another freshman, had a team-leading 79 rushing yards and a touchdown, which was enough to earn him Atlantic Sun Conference Freshman of the Week honors.

Without its leading rusher from a season ago in Kierre Crossley, UCA (0-2) is quickly re-establishing its rushing attack with Hale and Smith. Through two games, the freshmen have 177 of the Bears' 205 rushing yards and all three of their rushing scores.

"I think we're in a good position at the running back position and really in our run game," UCA Coach Nathan Brown said. "We're going to have to run the ball this week against [Arkansas-Pine Bluff] ... and I think we can do that with those big running backs."

Brown said Hale and Smith are backs that complement each other, and with both listed at 215 pounds, each are some of the biggest running backs on this year's team.

Hale, a former three-star prospect by both 247Sports and Rivals, signed with the Bears over offers from Houston, Tulsa and Baylor, among others. He finished his high school career with 1,220 yards and 12 touchdowns on 176 carries. Smith, who redshirted the 2020 season, was also a three-star recruit. A Duncanville, Texas, product, he chose UCA over offers from Kansas, Liberty and others.

In the Bears' 43-34 loss to Missouri State, Hale got the lion's share of the reps, running for a team-leading 16 times for 60 yards, making his impact most felt on touchdown runs of 1 and 3 yards. Smith got his 79 rushing yards on eight carries, averaging 9.9 yards per carry. Three of Smith's carries went for 10 or more yards, including a 19-yard touchdown run.

Smith said he was surprised, too, when he found out about his weekly honor from the ASUN.

"I knew I did good, but I felt I could do way better," Smith said.

And the best part about UCA's early season rushing successes?

"We've done all this without Cameron Myers," Brown said.

Myers was the Bears' second-leading rushing in 2020, with 263 yards and a touchdown. While he was expected to be UCA's main back to this point, he was not only limited against ASU, but missed Week 2's contest with an illness. The junior had 3 rushing yards on three carries in the opening-week loss to ASU, but he's expected to be back this week against UAPB.

Another back Brown has been high on is Kylin James, a freshman from Dumas. Brown said this week that James is as talented as any other player in the UCA running back room, though he's yet to record a carry this season.

As the season progresses, whether it's Hale, Smith, Myers or James, the position group seems to be taking a team-first approach.

"Our mindset as a room, as a whole, is that we all want to touch the ball."

NOTEWORTHY In the last matchup between the Bears and Golden Lions, UCA Coach Nathan Brown started at quarterback for the Bears. He finished the game with 181 passing yards and two touchdowns. … Last week, UCA quarterback Breylin Smith eclipsed 7,000 career passing yards. However, he’s still No. 4 on UCA’s list of career passing yards, behind Brown (10,558), Hayden Hildebrand (8,025) and Randy Huffstickler (7,360). … Smith’s 628 passing yards through two weeks are No. 8 in the FCS. … UCA receivers Lujuan Winningham and Tyler Hudson are No. 7 and No. 10 in the FCS in receiving yards through two weeks, with totals of 228 and 222 yards, respectively. … UCA defensive end Logan Jessup is No. 2 in the FCS in sacks through two weeks with 4.5. … UAPB Coach Doc Gamble was named SWAC and HBCU Head Coach of the Year in the spring after the Golden Lions went 4-1.