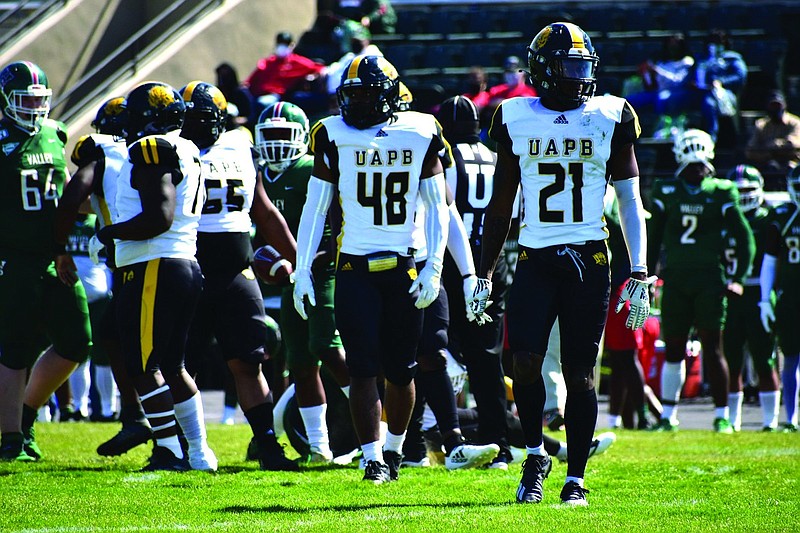 UAPB defensive back Jalon Thigpen (21) and the Golden Lions defense will attempt to slow the Central Arkansas offense today at Estes Stadium in Conway in the teams’ first matchup since 2008 in Little Rock. (Pine Bluff Commercial/I.C. Murrell)

Facing high-powered offenses isn't anything new for the University of Arkansas at Pine Bluff defense. But there's a certain aspect about the University of Central Arkansas that quickly caught UAPB Coach Doc Gamble's attention when he first watched film of the Bears.

"Their quarterback allows their receivers to make plays," he said. "You don't see that with a lot of guys. He puts it in their area, and he very seldom throws a bad pass. That's a rarity."

It's also rare that UAPB (1-0) gets a chance to make a national statement against an in-state rival. It'll get that opportunity against No. 25 UCA (0-2) today, and Gamble understands it won't be easy, especially with the challenges the Bears pose with quarterback Breylin Smith and his stable of wideouts.

UCA had six offensive players that were preseason first-team All-Atlantic Sun selections, including receivers Tyler Hudson and Lajuan Winningham. In Gamble's opinion, it's Smith who makes the Bears tick.

The senior has completed 60% (48-of-80) of his passes for 628 yards, 5 touchdowns and 4 interceptions through two games this season. He had four scoring tosses in UCA's opener against Arkansas State and could become the Bears' all-time leader in passing yards by the time the season ends.

However, his propensity for finding two of the top receiving duos in the Football Championship Subdivision is nothing short of amazing.

Since 2019, Hudson, who was also voted as the preseason ASUN Offensive Player of the Year, and Winningham have caught a combined 42 touchdowns. Thirty-six of those have come from Smith.

"Their quarterback gives them great opportunities to go up and catch most of the balls he throws," UAPB defensive back Jalon Thigpen said. "The type of receivers they have, they're some go-getters. They attack the ball, go up and get it at the highest point.

"They're aggressive and go up and get it whenever the ball is thrown their way."

The fact that Smith routinely finds Hudson and Winningham presents a unique challenge to the UAPB secondary -- one that Gamble is anxious to see.

"Those two guys [Hudson and Winningham] that they have, you may end up seeing them play on Sundays, both of them. They go up and track the football as well as any wideouts I've seen in a long time. They're long, they've got great hand to eye coordination. Both of the guys are really good football players, but we've got some good football players, too, and we're looking forward to that challenge."

UCA Coach Nathan Brown likes the rapport that Smith has established with all of his receivers, but he's not oblivious to what UAPB has defensively.

Three Golden Lions were named preseason All-Southwestern Athletic Conference picks, led by Thigpen. The senior's five interceptions during the spring were tied for first in the FCS, and he led the league in pass breakups with seven. The 6-1, 180-pounder was also third in tackles with 28 on a team that led the SWAC in both sacks and interceptions.

"They're not afraid to play man coverage," Brown said of UAPB. "That tells me that they've got confidence in their defensive backfield. They've got one of the better DBs we'll probably play all year in Jalon Thigpen.

"But Lajuan and Tyler never cease to amaze me. One can have a quiet half then all of sudden explode for a 100-yard quarter. And vice versa. That's what makes it so hard to defend."

But Thigpen, like Gamble, is embracing what lies ahead tonight.

"We've got to go out and play our game," he said. "We have to go out there, do what we do and treat it no differently than we would any other game. They rely on their receivers a lot, so it'll be up to me and my defensive backs to try to take the ball away from them when we get the opportunity.

"I do think that we have to play our brand of football. We'll be ready to play."