'Not Long Ago, Not Far Away': KC exhibition goes inside walls, minds of Auschwitz 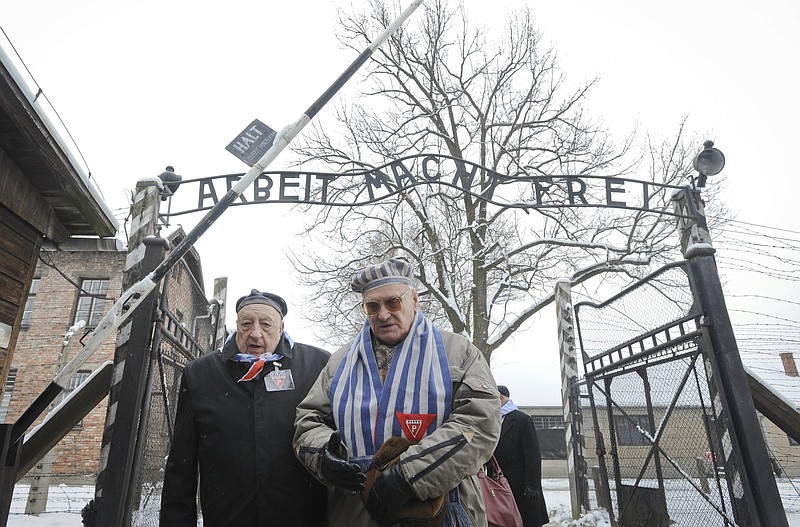 Holocaust survivors walk outside the gate of the Auschwitz Nazi death camp in Oswiecim, Poland in 2015, 70 years after prisoners there were liberated by the Soviet Red Army. An exhibit in Kansas City, “Auschwitz. Not long ago. Not far away” opened June 14. (AP/Alik Keplicz)

"Auschwitz did not start with gas chambers. Hatred does not happen overnight; it builds up slowly among people. It does so with words and thoughts, with small everyday acts, with prejudices. When we had the vision to create the exhibition, we conceived its narrative as an opportunity to better understand how such a place could come to exist, and as a warning of where hatred can take us to. Therefore, it is of vital importance to remember the road that led to Auschwitz and the consequences it had." -- Luis Ferreiro

Luis Ferreiro is the driving force behind an exhibition currently on show at Kansas City's Union Station. Titled "Auschwitz. Not long ago. Not far away," it was nearly six years in conception, and Kansas City, Mo., is the last of only two stops it will make in the United States. Since it opened June 14, it has been sold out most days, and Ferreiro advises visitors they'll leave with more questions "than simple and digested answers."

"There are many different layers in the exhibit, and it will be up to each visitor to decide how deep they will like to go in the understanding of what Auschwitz was, how such a place came to exist and what it means for us today," he says. "In that regard, the exhibition is first and foremost a tribute to the memory of the victims. But we also hope this stay in our very recent past gives visitors the tools to critically analyze our own present."

The exhibit features more than 700 original artifacts, 400 photographs and unpublished memoirs, many of which have never been available to the public. The idea for the exhibition started with Ferreiro, whose family founded an exhibition company called Musealia 21 years ago in their home country of Spain.

"It has been an incredible journey full of learning and creativity, that gave us also the chance to work with the best professionals in the different topics we created exhibitions about," he says. "From historians to architects, conservators or designers, leading groups of very talented individuals into a vision for a particular exhibition has been an incredible experience."

"It would be impossible to name all the institutions and individuals who decided to come together to make the exhibition possible. The Auschwitz-Birkenau State Museum is not only the co-producer of the exhibition, but also the source of most of the original objects displayed. And as important as that, they made available their expertise, historical research and knowledge."

The exhibition also includes loans from more than 20 museums, institutions and private collections from all over the world.

Rather than just a story of horror, the exhibition is about people, "the perpetrators and the prisoners, and the juxtaposition of their stories," said George Guastello, president and chief executive of Union Station.

"We always had a feeling that the story would resonate," he said. "But I have been so humbled by the response in the community. What better time for this exhibition than when we see what's happening in our world today? It speaks to the souls of the people. We're on a mission, not to sell tickets but to change the world one person at a time. I am humbled to even be in the presence of what [Luis Ferreiro] created."

The Midwest Center for Holocaust Education is a partner in the exhibition, and the center's Executive Director Jessica Rockhold says having the Holocaust artifacts in Kansas City is "incredibly significant."

"Most people will never have the opportunity to travel to Auschwitz and other Holocaust sites," Rockhold said in a September 2020 story in The Kansas City Jewish Chronicle. "This exhibit offers access to those precious artifacts that personalize and make tangible the history we learn in books."

According to The Chronicle, the exhibit "explores the dual identity of the camp as a physical location -- the largest documented mass murder site in human history -- and as a symbol of the borderless manifestation of hatred and human barbarity."

Among the exhibit's artifacts are hundreds of personal items -- such as suitcases, eyeglasses and shoes -- that belonged to survivors and victims of Auschwitz.

But perhaps more important is information about what The Chronicle calls "the development of Nazi ideology and the transformation of Auschwitz from an ordinary Polish town known as Oswiecim to the most significant Nazi site of the Holocaust -- at which approximately 1 million Jews, and tens of thousands of others, were murdered." The Chronicle points out that victims were not only Jews but political prisoners, Roma (also known as Gypsies), Soviet POWs, Jehovah's Witnesses and anyone the Nazis labeled as "homosexual," "disabled," "criminal" or "inferior."

"Each object in the exhibition is unique," Ferreiro says. "They are all fragments of history and each one of them has its own echo. It is fascinating to see how visitors establish different relationships with them. For many, personal items from the victims -- little shoes, glasses, suitcases, mirrors -- are profoundly touching. Their nature helps them easily identify with them. And for others, iconic objects will become the ones that get to them: posts from the camp, a section of a barrack, elements from the perpetrator ...

"It is impossible to predict which one will be more powerful for each one of us," he says. "I can only say that we present them in a way that allows each object to speak for itself, to tell their story. And, whenever possible, we identify the original owner. The authenticity that the objects bring makes the exhibition a very personal experience for visitors, and an invitation for reflection." 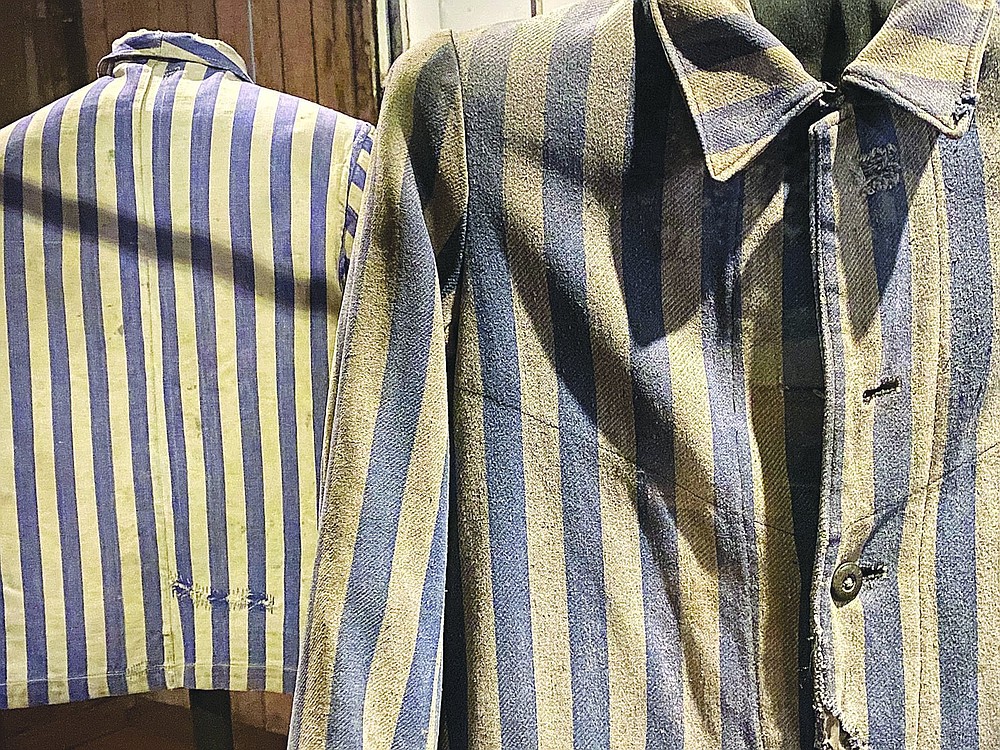 The Kansas City, Mo., exhibition of “Auschwitz. Not long ago. Not far away” is the second of two stops in the United States. (Pawel Sawicki, Auschwitz Memorial) 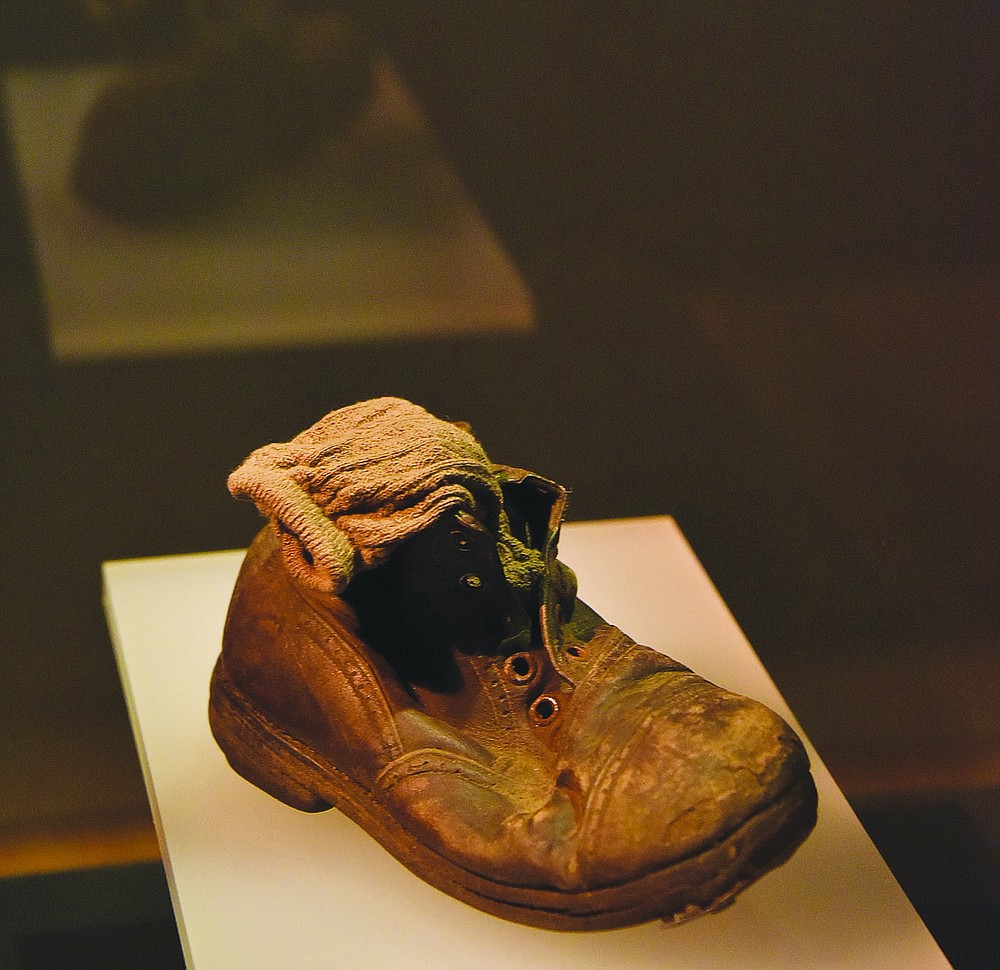 Many visitors to the “Auschwitz. Not long ago. Not far away” exhibit currently open at Union Station in Kansas City, Mo., talk about a single little shoe, with a tiny sock tucked neatly inside it, as the most poignant artifact of the World War II death camp, imagining a child expecting to put his shoes back on after a “shower.” (Pawel Sawicki, Auschwitz Memorial) 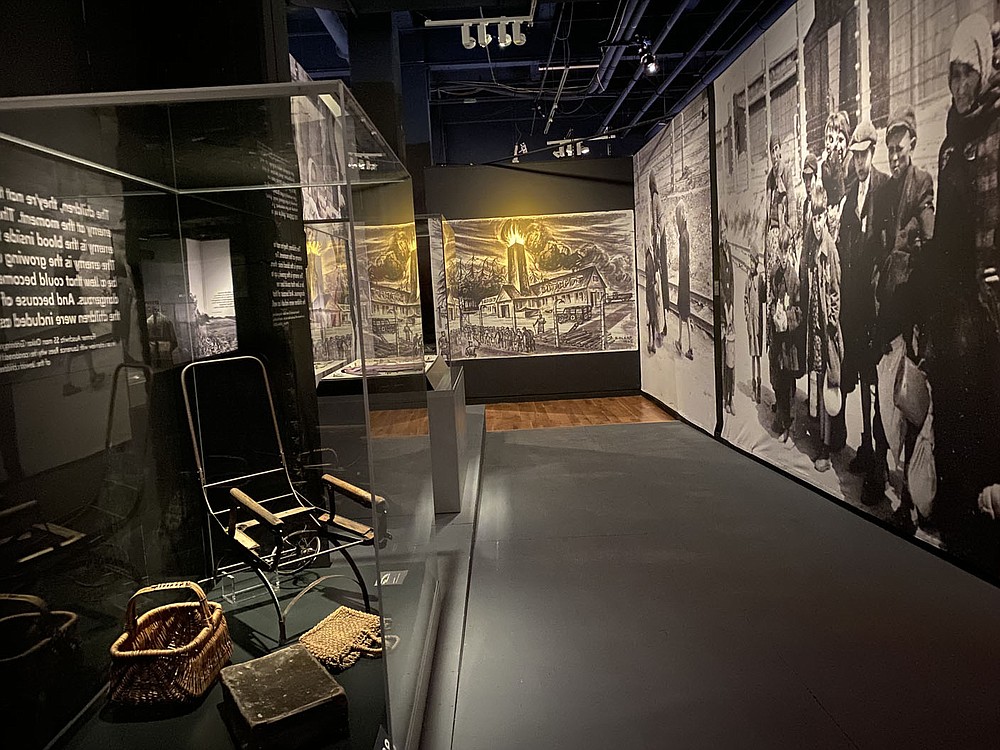 The Kansas City exhibition of “Auschwitz. Not long ago. Not far away” is the second of two stops in the United States. (Pawel Sawicki, Auschwitz Memorial) 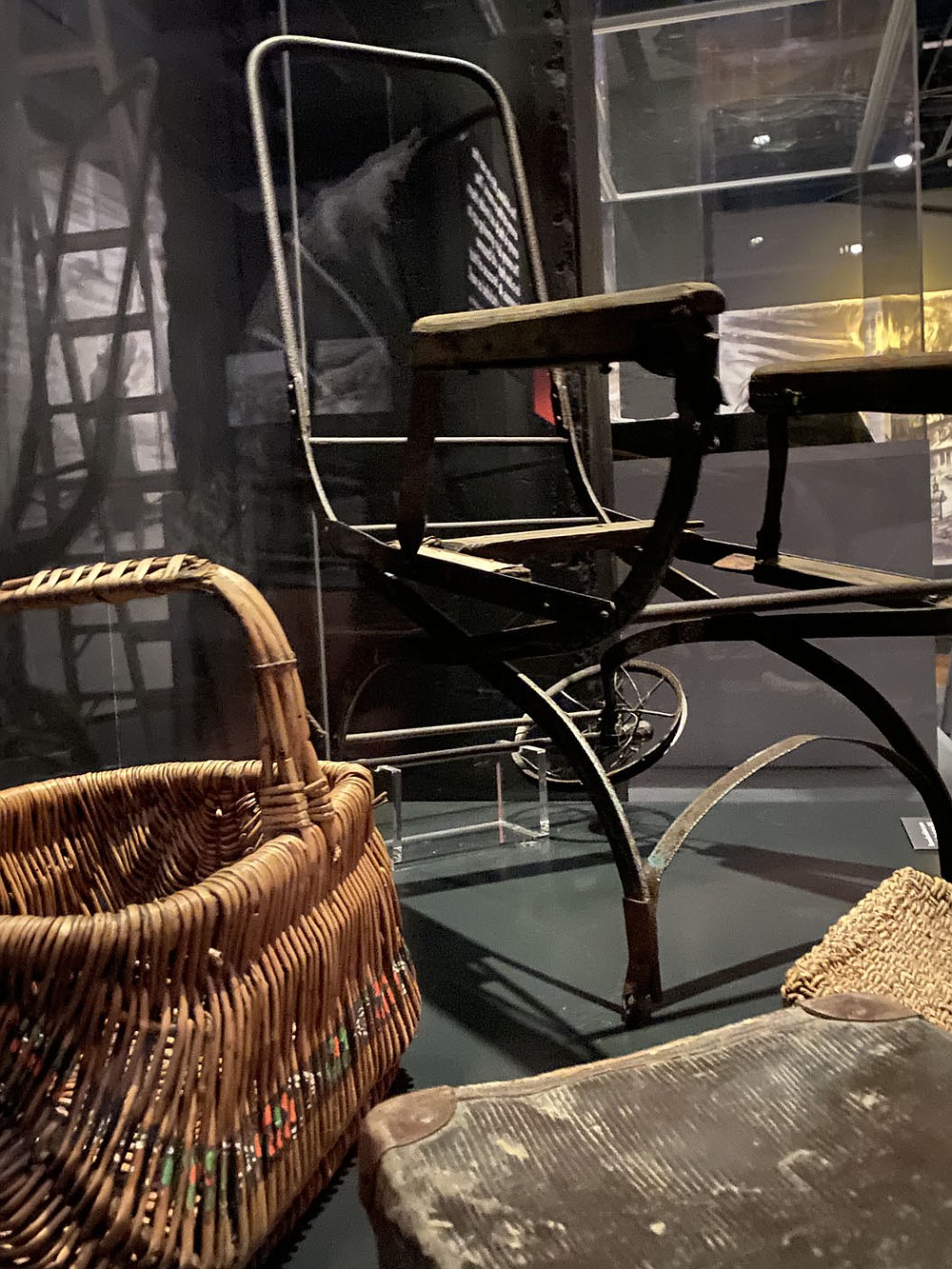 Some 232,000 children were deported to Auschwitz, 216,000 of them Jewish. Most of the Jewish children were murdered in gas chambers. In the touring exhibition now on show in Kansas City, you can see a “push chair” (stroller) that belonged to one of them. (Pawel Sawicki, Auschwitz Memorial) 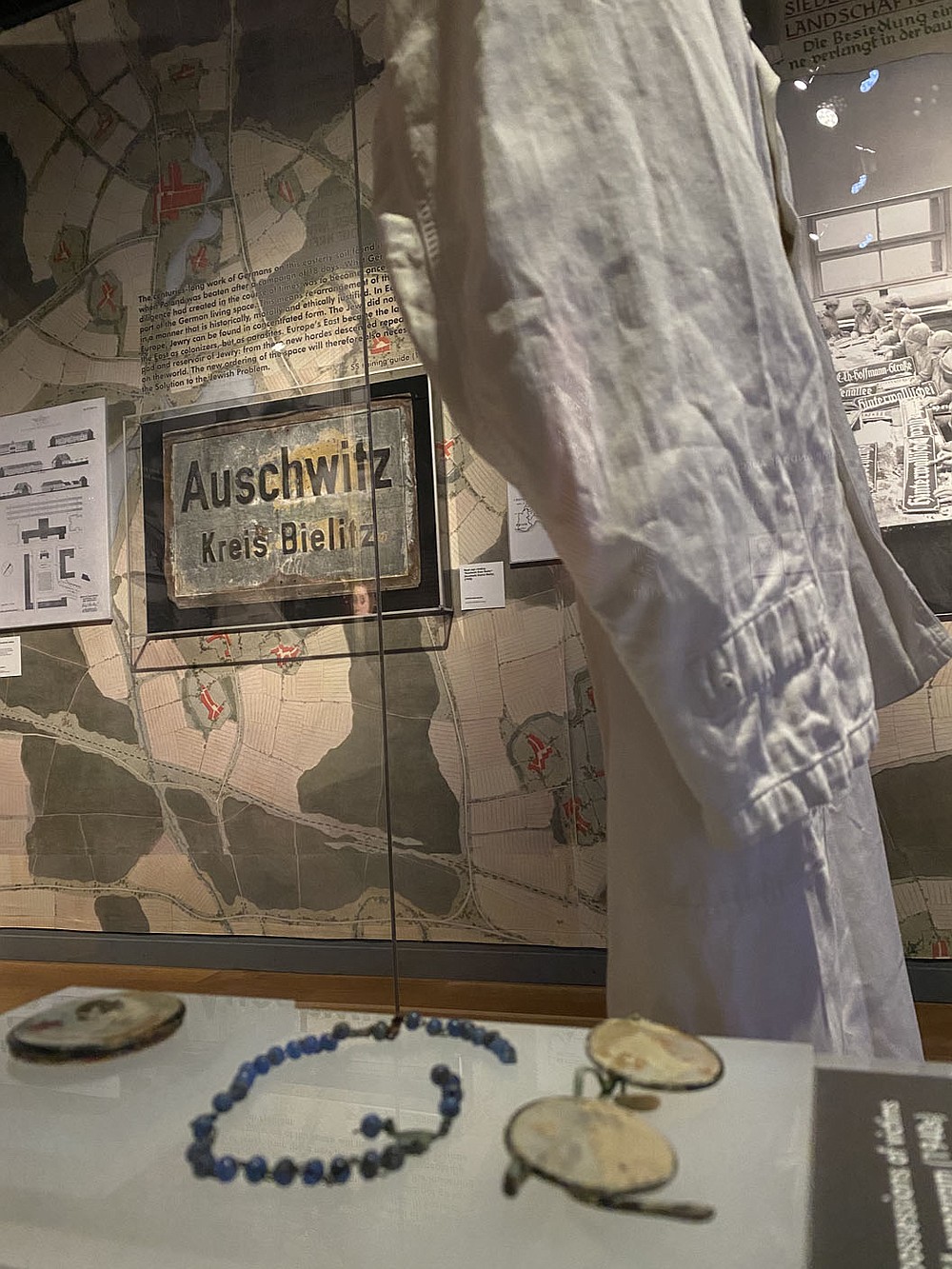 After the German attack on Poland in September 1939, the town of Oświęcim was within the territory annexed directly into the Third Reich. The name of the town was turned into Auschwitz. (Pawel Sawicki, Auschwitz Memorial) 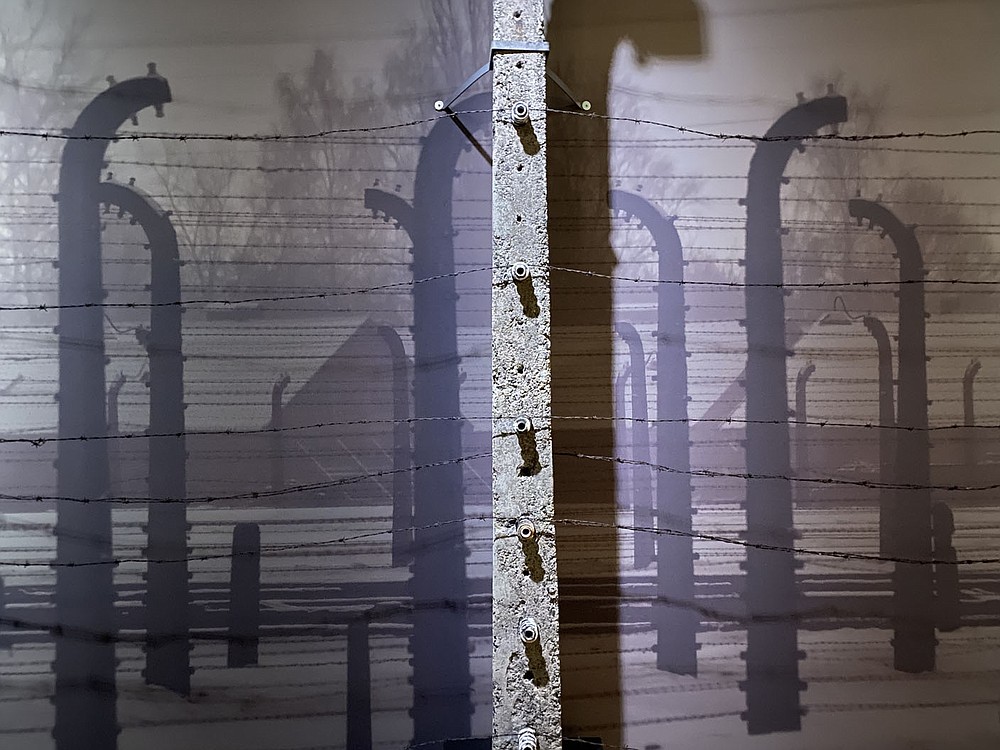 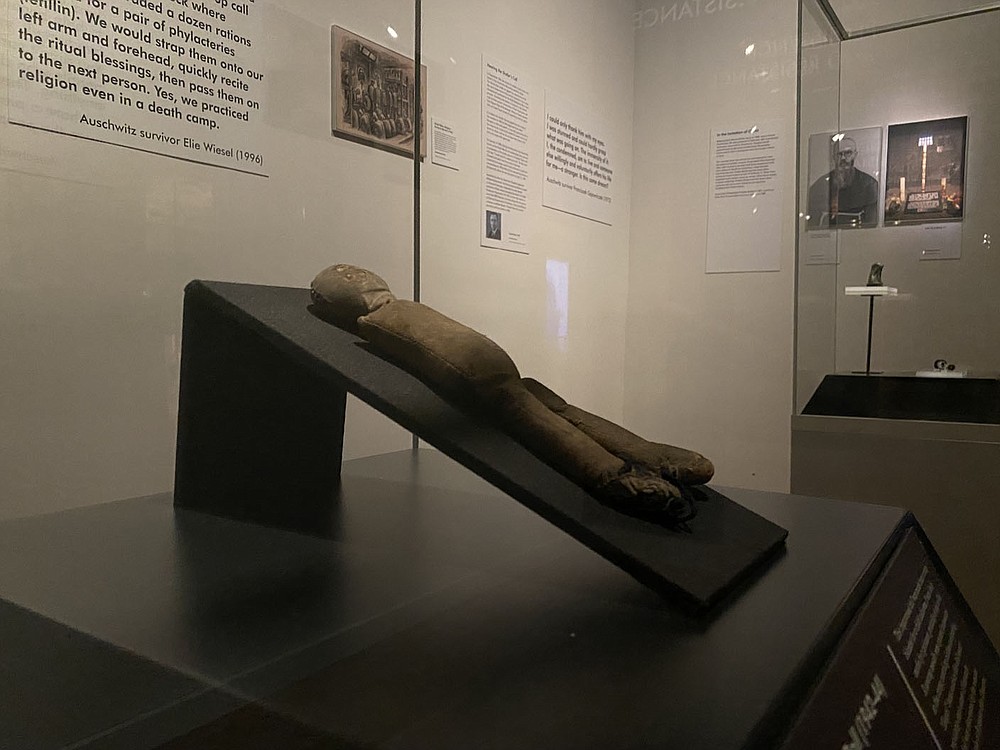 This doll was made of a camp blanket by an unknown female prisoner in Auschwitz. (Pawel Sawicki, Auschwitz Memorial) 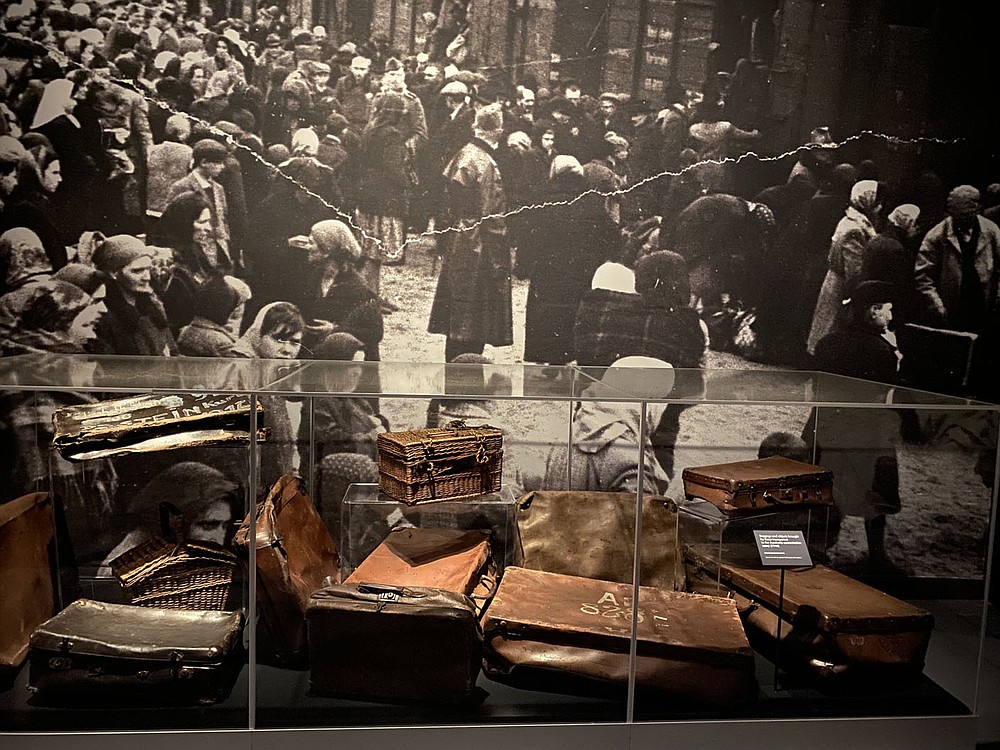 Jews deported for extermination were told that they were being resettled. Therefore they packed their most important belongings for the journey. Everything was robbed when they arrived at the camp, Sawicki says. (Pawel Sawicki, Auschwitz Memorial) 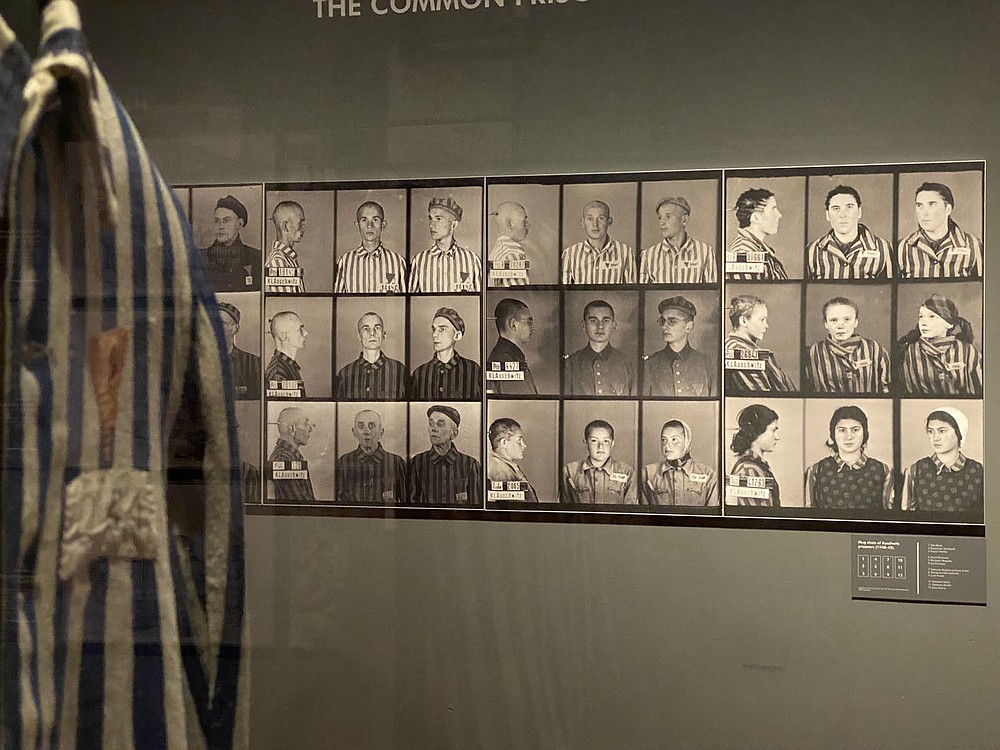 Registration images of prisoners of Auschwitz and a camp striped uniform are part of the touring exhibit now at Union Station in Kansas City, Mo. People incarcerated into the camp were degraded to numbers with no individuality. Their hair was cut, and most had to wear the same kind of clothing, says Pawel Sawicki. (Pawel Sawicki, Auschwitz Memorial) 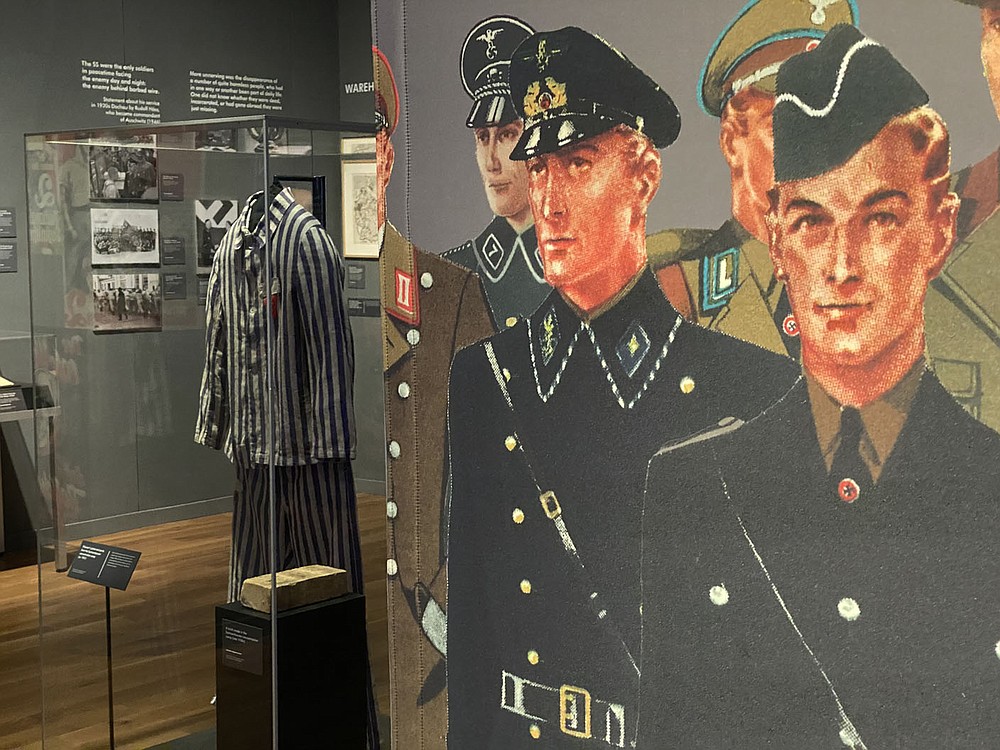 “Auschwitz. Not long ago. Not far away.” is about people, “the perpetrators and the prisoners, and the juxtaposition of their stories,” says George Guastello, president and chief executive of Union Station. (Pawel Sawicki, Auschwitz Memorial) 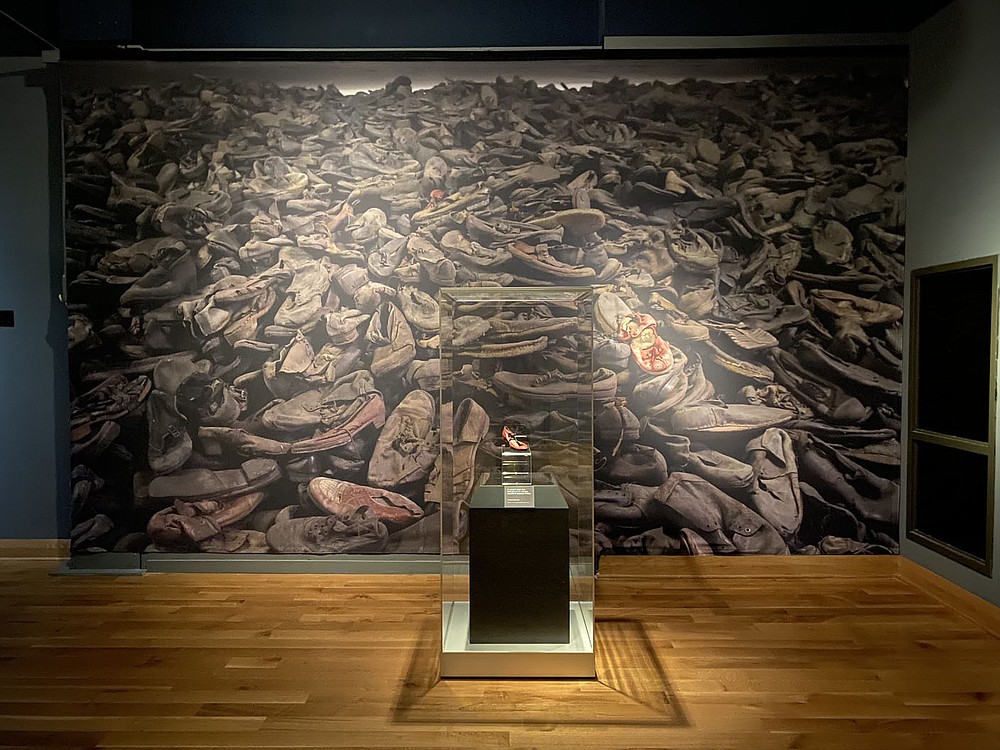 Some 80,000 shoes left behind by those killed at the World War II concentration camp called Auschwitz are displayed in the main exhibition of the Auschwitz Memorial. They are captured in this image included in the touring exhibition “Auschwitz. Not long ago. Not far away.” (Pawel Sawicki, Auschwitz Memorial) 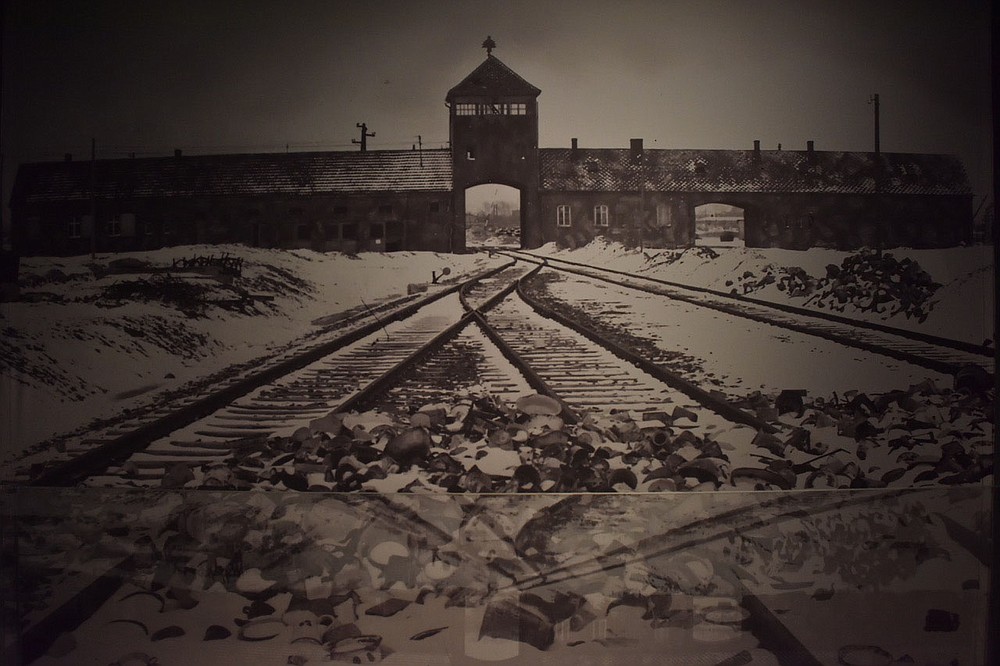 All over the world, Auschwitz has become a symbol of terror, genocide and the Shoah. It was established by Germans in 1940, in the suburbs of the Polish city of Oswiecim and became the largest of the extermination centers where the “Endlösung der Judenfrage” (the final solution to the Jewish question — the Nazi plan to murder European Jews) was carried out, according to the Auschwitz-Birkenau Memorial and Museum. This image of the main gate was taken from inside the camp after the liberation. (Pawel Sawicki, Auschwitz Memorial)
More News

‘Auschwitz. Not long ago. Not far away’