Police gear up for rally at Capitol

Law enforcement out in force this time after Jan. 6 missteps by COLLEEN LONG, MICHAEL BALSAMO AND MICHAEL KUNZELMAN THE ASSOCIATED PRESS | September 18, 2021 at 4:21 a.m. 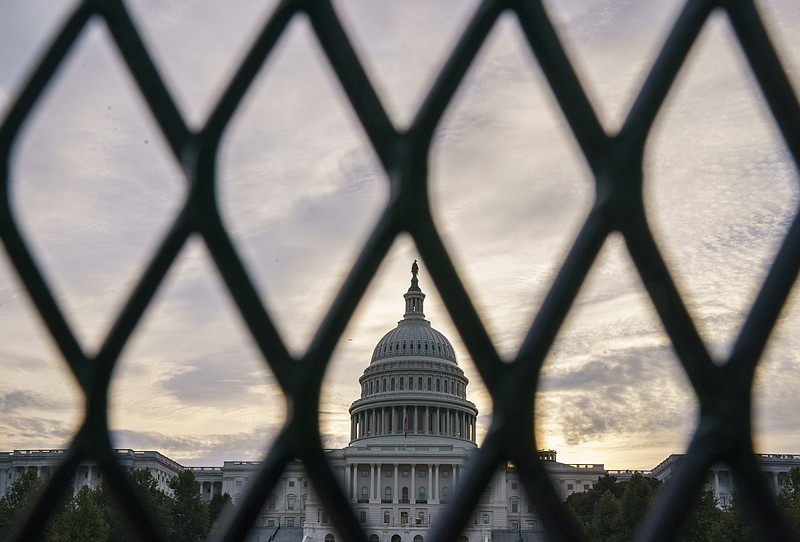 Security fencing has been reinstalled around the Capitol in Washington, ahead of a planned rally today by far-right supporters of former President Donald Trump who are demanding the release of rioters arrested in connection with the Jan. 6 insurrection. (AP/J. Scott Applewhite)

WASHINGTON -- Burned before, Capitol Police say they are taking no chances as they prepare for a rally today at the U.S. Capitol in support of rioters imprisoned after the violent Jan. 6 insurrection.

Though it is unclear how big the rally will be, the Capitol Police and Metropolitan Police Department are fully activating in an effort to avoid a repeat of the pre-inauguration attack. Under-prepared police were overwhelmed as hundreds of former President Donald Trump's supporters broke into the Capitol and interrupted the certification of Joe Biden's victory.

Capitol Police Chief Tom Manger said at a news conference Friday that it was difficult to say whether threats of violence at the event are credible, but he said that "chatter" online and elsewhere has been similar to intelligence that was missed in January.

A permit for the protest allows 700 people. Manger said he believes the most likely possibility for for violence Saturday will involve clashes between the protesters and counterprotesters who may show up.

"We're not going to tolerate violence, and we will not tolerate criminal behavior of any kind," Manger said. "The American public and members of Congress have an expectation that we protect the Capitol. And I am confident that the plan we have in place will meet that expectation."

[Video not showing up above? Click here to watch » arkansasonline.com/918j6rally/]

After multiple missteps in January, law enforcement is out in full force. The fence around the Capitol is back up, temporarily. Police are preparing for the possibility that some demonstrators may arrive with weapons. The D.C. Police Department is at the ready, and U.S. Capitol Police have requested assistance from nearby law enforcement agencies.

The rally, organized by former Trump campaign strategist Matt Braynard, is aimed at supporting people who have been detained after the Jan. 6 insurrection -- about 60 people held behind bars out of the more than 600 charged in the deadly riot. It's the latest attempt to downplay and deny the January violence.

"Hopefully the overreaction of law enforcement is actually the thing that can keep this from getting out of hand," Kinzinger said in an interview Thursday. He predicted that people will criticize the effort if the protest is small and nonviolent, "but that's what needs to happen because January 6th obviously was an underreaction and it escalated."

Intelligence collected ahead of Saturday's rally has suggested that extremist groups such as the Proud Boys and Oath Keepers will turn up. But some prominent members of the groups have sworn they aren't going and have told others not to attend. Far-right online chatter has been generally tame, and Republican lawmakers are downplaying the event.

Defense Secretary Lloyd Austin approved a request for about 100 members of the D.C. National Guard to be stationed at a city armory near the Capitol, to be called if needed as backup for other law enforcement agencies. They will primarily protect the Capitol building and congressional offices. They'll be without firearms, but will be equipped with batons and protective vests for self-defense.

Meanwhile, a Homeland Security intelligence report warned of social media posts that discussed possibly storming the Capitol the night before the rally. One user also "commented on kidnapping an identified member of Congress," the document said, though the lawmaker wasn't identified by name in the report. No lawmakers were expected to be in the building today, as Congress is out of session.

"Other references to violence identified on social media include discussions of using the rally to target local Jewish institutions, elected officials, and 'liberal churches,'" the intelligence report said.

Many commenters on online platforms popular with the far right like Telegram disavowed the rally, saying they believed law enforcement was promoting the event to entrap Trump supporters. Some urged their followers not to attend what they said was a "false flag" event they believed was secretly organized by the FBI.

At the same time, however, some commenters continued to promote rallies planned for today in cities and state capitals across the country.

In a notice to House members this week, Sergeant at Arms William Walker urged lawmakers to stay away from the Capitol complex on Saturday. And lawmakers who supported Trump's efforts to overturn his election defeat distanced themselves from the event.

"I don't know what it is," Republican Sen. Ted Cruz of Texas said when asked about the rally.

Trump is still using his platform as the most popular leader in the GOP to express sympathy for those who were arrested and continue spreading election misinformation. In a statement Thursday, he said: "Our hearts and minds are with the people being persecuted so unfairly relating to the January 6th protest concerning the Rigged Presidential Election."

The Associated Press reviewed hundreds of court and jail records for the Capitol riot defendants to uncover how many were being detained and found about 60 held in federal custody awaiting trial or sentencing hearings. Federal officials are still looking for other suspects who could also wind up behind bars. Just Friday, a judge ordered the pretrial detention of a Pennsylvania woman who contends the court doesn't have jurisdiction over her. 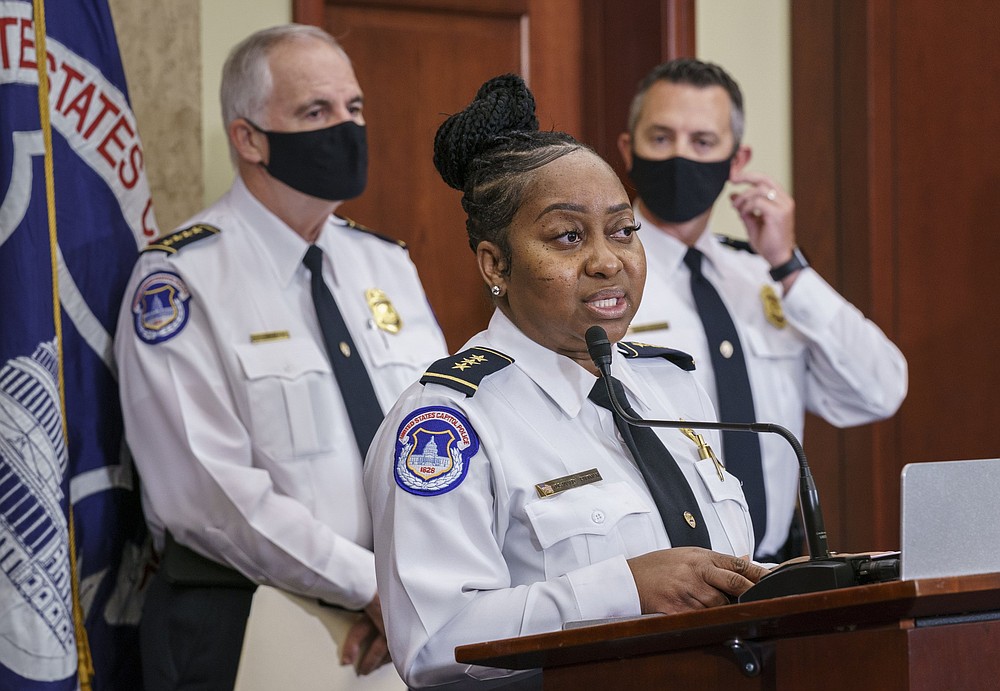 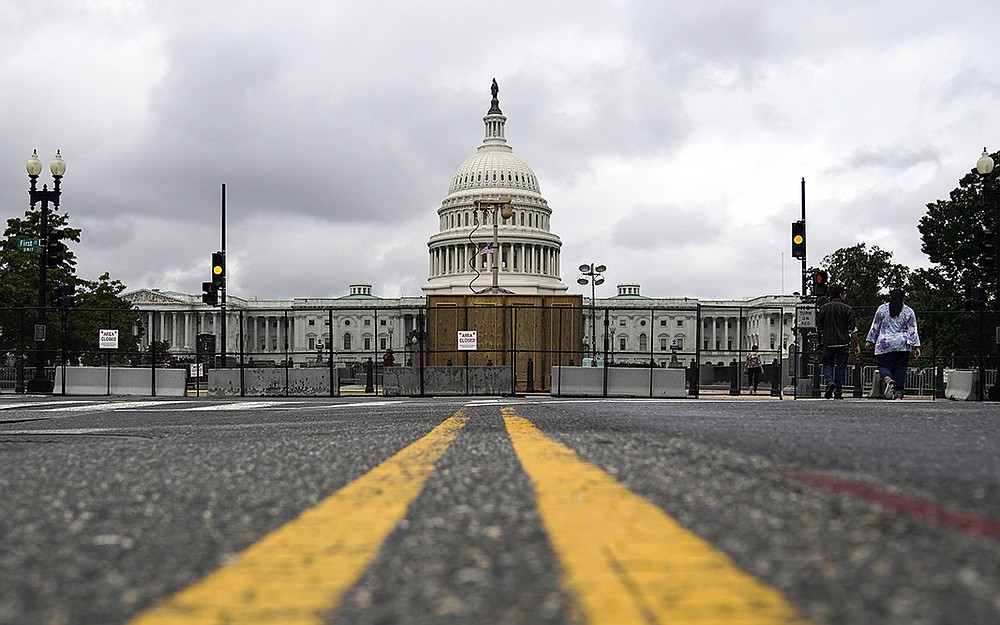 Security fencing protects the U.S. Capitol on Friday, and the Capitol Police agency said that it is taking no chances ahead of a rally today, planned by allies of former President Donald Trump, that is aimed at supporting the so-called political prisoners of the Jan. 6 insurrection. “We’re not going to tolerate violence, and we will not tolerate criminal behavior of any kind,” Capitol Police Chief Tom Manger said. (AP/Brynn Anderson)

Print Headline: Police gear up for rally at Capitol