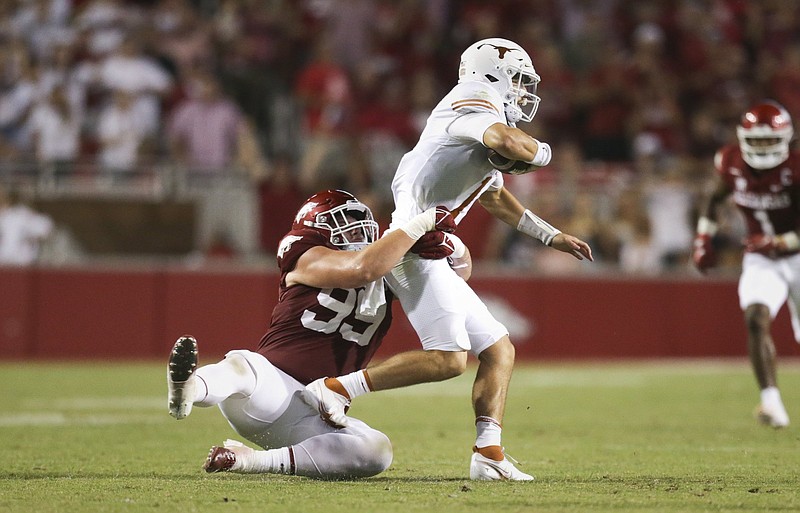 FAYETTEVILLE -- When graduate transfer defensive tackle John Ridgeway announced in April that he was transferring from Illinois State to the University of Arkansas, other offers he turned down included Texas, Michigan, Penn State, Iowa and USC.

The Longhorns no doubt wish Ridgeway had been on their side last Saturday at Reynolds Razorback Stadium.

Ridgeway led the defensive line with six tackles, including a sack of quarterback Hudson Card for a 5-yard loss, as Arkansas beat Texas 40-21.

Card was sacked three times among the Razorbacks' 10 tackles for losses totaling 25 yards.

"We just wanted to go out there and dominate," Ridgeway said. "There was a lot of talk about who's the better team during the week. We took that personal. ... We wanted to wreak havoc in the backfield."

The game was Ridgeway's Arkansas debut because he missed the 38-17 win over Rice in the opener after undergoing surgery to remove his appendix six days earlier.

"I'll be honest with you, he wanted to play the first week against Rice," Arkansas Coach Sam Pittman said. "And we said, 'No, no, no. We can't do all that.'

"We kind of gradually worked him through last week. By the time Wednesday, Thursday hit, he was full speed ready to go."

Ridgeway said he didn't feel too bad when he woke up from surgery and the next night walked his dog around the block a couple of times.

"My parents, they raised me that if I've got a bump or a bruise or a scrape to walk it off, so that's what I tried to do," he said. "The trainers had a different opinion on that, so I kind of just had to hold back and relax and not do anything."

Ridgeway said there was some talk of taking two or three weeks to recover.

Ridgeway played off the bench against Texas, but he's listed as a starter today against Georgia Southern.

Pittman said of his expectations for Ridgeway are, "More and more. Better and better.

"He'll do it, too, because he's a worker. He's one of those guys you can pat on the back and he's going to play harder and better versus, 'Man, I am pretty good.' "

Ridgeway began feeling ill on Aug. 27, the day before Arkansas' mock game. When he still felt ill and had stomach pain the next day, Pittman credited trainer Dave Polanski with quickly diagnosing that it was appendicitis.

"Dave did a great job of analyzing him and we got him [to the hospital] real fast," Pittman said. "I think it was a lot easier surgery because it was diagnosed so quickly."

"He's so tough and I was excited to see him finally get his paws on a quarterback," linebacker Bumper Pool said. "Just because us playing against our quarterbacks and them not being live, he finally got to let loose. So getting to see that was awesome.

"We're very excited to see what he can do for us the rest of the season."

At Illinois State, an FCS school in his hometown of Bloomington, Ill., Ridgeway played in front of home crowds that averaged 9,260 in 2018 and 9,242 in 2019. Last season when the Redbirds played a four-game spring schedule due to the coronavirus pandemic, the average home attendance was 1,853.

The Arkansas-Texas game was sold out with an announced crowd of 74,531.

"I wasn't used to it, especially making a play and looking up and seeing everybody jumping up and down," Ridgeway said. "It was really nice."

Ridgeway said his recruiting options at Bloomington High School were limited because he didn't focus on academics.

"I just slacked," Ridgeway said. "I didn't really pay attention in class, so that kind of took away my chances to get recruited.

"ISU took a leap of faith with me and I ended up making my eligibility to go play college football. Went there, played pretty well."

As a sophomore in 2019, Ridgeway helped the Redbirds go 10-5 and make the FCS playoffs, where they beat Southeast Missouri State 24-6 and the University of Central Arkansas 24-14 before they lost at No. 1 North Dakota State 9-3.

Last spring, Ridgeway had 22 tackles with 3 for lost yards, 2 pass breakups, 1 interception and 1 forced fumble. That much production in four games made Ridgeway a hot commodity when he decided to transfer.

"When I did get in the portal, it kind of felt like I was a five-star recruit," he said. "I just had my phone blowing up every second of the day.

"Coaches calling me at 10:30, 11 o'clock at night and I was like, 'Wow.' It was definitely nice and fun to experience it. I just wish I'd experienced it at a younger age."

A key reason Ridgeway picked Arkansas was to play in the SEC, which had 363 players on opening-day NFL rosters.

"The best talent at the next level comes out of the SEC," Ridgeway said. "So I figured why not go against them?"

Ridgeway began preseason camp working on the third-team defense, but quickly was getting first- and second-team snaps.

"He's a monster," Arkansas linebacker Hayden Henry said. "When he's in shoulder pads and a helmet, you're like, 'How are you human?' Because he looks so big.

The Razorbacks had a need for Ridgeway after losing defensive lineman Jonathan Marshall, a rookie with the New York Jets.

"He's a very explosive player," Arkansas safety Joe Foucha said. "He moves real fast and he has the size as well. It's just like John Marshall being out there I feel like. He's the same type of player."

Pittman said Ridgeway fits in well with the Razorbacks not only because of his size and talent, but also with his work ethic, outgoing personality and sense of humor.

"He's just a great teammate, and he is what I call 'Arkansas,' " Pittman said. "He's physical and has a little chipness to him where, 'Hey' I've got to prove something.' "