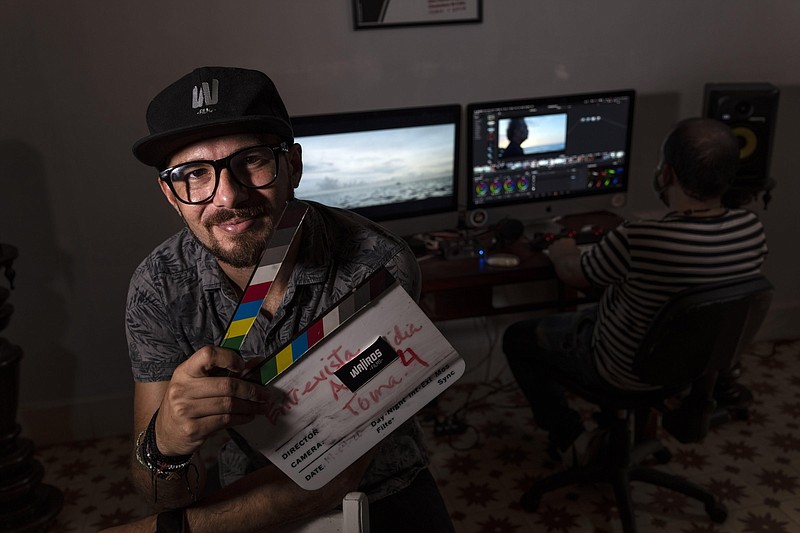 Carlos Gomez, 35, owner of the audiovisual production company Wajiros Films, poses for a photo at his company’s editing room in Havana earlier this month. (AP/Ramon Espinosa)

HAVANA -- Opening a small business is a bureaucratic headache in many parts of the world. In Cuba, it's an adventure in largely unknown territory.

Most sorts of private businesses have been banned for more than 50 years, even if hundreds of thousands of Cubans in recent years have taken advantage of changes that opened up cracks for small private enterprise in the once-solid wall of the state-dominated socialist economy.

Now, after five years of waiting, a new legal system takes effect Monday that could greatly expand the scope of private businesses, and give them greater legal certainty in efforts to help an economy in crisis.

Cautious or enthusiastic, business executives are concerned about an inefficient credit system, the requirement to have U.S. dollars that the state itself does not sell and limitations on hiring professional services.

"Knowing that I can have a company, a business in Cuba, in my country, invest, take risks in the markets and that this is supported by law ... is peace of mind for me," said Carlos Gomez, the 35-year-old owner of the audiovisual production company Wajiros Films.

The company has made at least 35 films since its opening in 2017, short, long and international co-productions, all under the label of "artistic creation collective" but without a legal status. That carries negative consequences such as the impossibility of having bank accounts, the lack of distinction between business and family assets, and the impossibility of importing equipment.

At the end of August, Cuban authorities published in the Official Gazette about 20 norms that allow and regulate small and medium-sized enterprises, know as SMEs, which were eliminated in 1968 in a revolutionary offensive against the last vestiges of private property.

At that time, warehouses, bars or repair shops were closed or absorbed by the state, which struggled to manage those businesses efficiently.

But the government legalized a tightly limited -- but legal -- form of self-employment in the early 1990s to cope with the crisis caused by the collapse of Soviet aid. It taxed and squeezed, but never eliminated the sector.

Cuban leaders had always been uneasy with private economic activity, previously describing it as an evil that was necessary to provide jobs and services that the state could not during hard times. The government had also complained about inequality associated with self-employment, since a private worker could earn much more than a state worker.

But as of 2010, former President Raul Castro recognized the lack of productivity and slightly opened the economy to individual initiative. Some businesses ended up having more than 50 employees despite the fact that they were officially "self-employed."

In 2019, before the pandemic and the effects of the U.S. sanctions that suffocated the economy, there were about 600,000 "self-employed" workers, most of them linked to the tourism market.

"One was tied to a 'self-employment' license that had many limitations. With the legalization (of SMEs), new possibilities and perspectives are opened. Among these is the recognition of several partners in a business and legal status," said Lauren Fajardo, designer and co-owner of Dador, a clothing workshop created by her and two friends that employed about 10 people. Like hundreds of other initiatives, the business has been paralyzed by the pandemic.

The new regulations establish that small and medium-sized enterprises -- a mandatory status for companies with more than three workers -- will be established as "limited liability" companies that must be approved by the Ministry of the Economy.

They may have up to 100 employees, and they will be allowed all activities except those that the state reserves as strategic -- education, health, defense, waste management and mining, among others.

There will be limitations on professional services. The establishment of companies of this type or their independent exercise is not allowed, so architects, engineers or lawyers are not authorized to set up law firms, but they can be employed by small and medium-sized enterprises.

"The positive thing about these rules is that they arrived. ... I think it is time to think about how to take advantage of it and that these really contribute to the growth of the country, " economist Omar Everleny Perez said.

Experts and businessmen had asked for the laws for more than five years. They were published in the midst of a crisis with an 11% drop in GDP in 2020, a shortage of basic goods and a growth of the black market. Social tension reached such a point that in July there were unusual and large protest demonstrations on the island.

Now that they have laws, entrepreneurs have begun to evaluate their impact. The AP spoke with more than a dozen of them, and some chose not to give their names to fully analyze their concerns.

One of the questions among those who have established businesses, for example, is how the capital or machinery will be certified, since many were acquired irregularly or rescued from abandoned state workshops.

Many wonder how the credit system in Cuban pesos will operate if raw materials are acquired in dollars, or how goods such as vehicles that the state does not offer or allow to bring from abroad will be obtained, or whether employees will be able to have unions.

One aspect that causes concern is that the law allows for Cuban citizens and permanent residents in the country to open limited liability companies, or LLCs. But it excludes emigrants who in many cases are the true owners of enterprises that are already operating, or owners of the capital necessary to form small and medium-sized enterprises.

In addition, the authorities reported that what will open Monday is a "call" to register LLCs and cooperatives but by sectors, starting with those in food production or with a technological base. Many entrepreneurs wonder how long they will have to wait for an appointment if they are outside the areas considered key by the government, despite the fact that their initiatives will generate jobs.

"People are seeking to understand, understand the context and above all to find opportunities to promote projects," said Oniel Diaz, co-founder of the Auge consultancy.

Diaz held advisory talks with business people to discuss the law. During the meetings, he noted a change that could show the future of small and medium-sized enterprises in Cuba given that tourism is paralyzed and the only thing that can supply customers is the national market, there could be a reconfiguration of the sector after the pandemic.