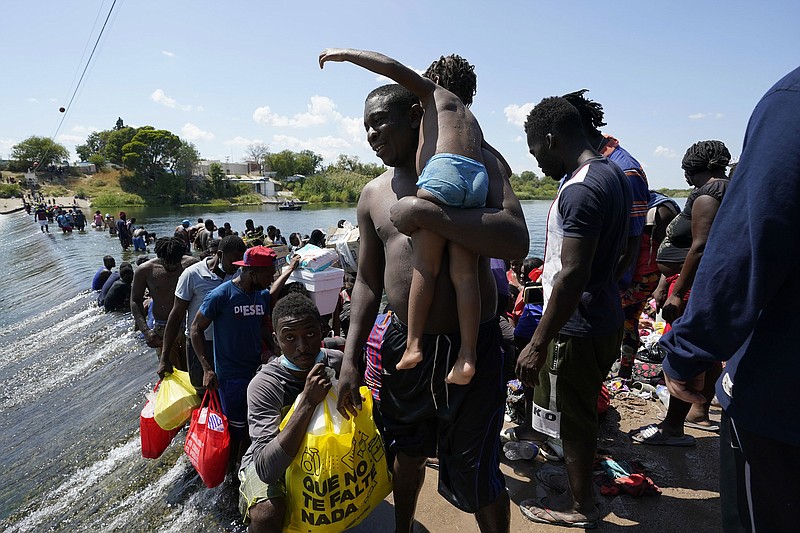 Haitian migrants cross into and out of the United States on Saturday after buying water, food and diapers in Ciudad Acuna in Mexico and then returning to an encampment at a bridge in Del Rio, Texas. More photos at arkansasonline.com/919txcamp/. (AP/Eric Gay)

DEL RIO, Texas -- Haitian migrants seeking to escape poverty, hunger and a feeling of hopelessness in their home country said U.S. plans to speedily send them back will not deter them, as thousands of people remained encamped on the Texas border Saturday after crossing from Mexico.

The Biden administration is preparing to send planeloads of migrants back to Haiti starting as soon as today in a deportation blitz aimed at discouraging more border-crossers from streaming into a crude South Texas camp where nearly 15,000 have arrived, according to five U.S. officials with knowledge of the plans.

The Department of Homeland Security said it would not discuss the frequency and schedule of the flights, citing operational security. But one official said the department will start with up to three flights per day, while cautioning that plans remained in flux.

Marsha Espinosa, a spokeswoman for the department, confirmed the administration's broad plans in an email.

"DHS will secure additional transportation to accelerate the pace and increase the capacity of removal flights to Haiti and other destinations in the hemisphere within the next 72 hours," Espinosa said.

"We have reiterated that our borders are not open, and people should not make the dangerous journey," Espinosa added. "Irregular migration poses a significant threat to the health and welfare of border communities and to the lives of migrants themselves and should not be attempted."

[Video not showing up above? Click here to watch » arkansasonline.com/919haitians/]

The department said Saturday that it moved about 2,000 of the migrants from the camp to other locations Friday for processing and possible removal from the U.S. Its statement also said it would have 400 agents and officers in the area by Monday morning and would send more if necessary.

The announcement marked a swift response to the sudden arrival of Haitians in Del Rio, a Texas city of about 35,000 people roughly 145 miles west of San Antonio. It sits on a relatively remote stretch of border that lacks capacity to hold and process such large numbers of people.

A U.S. official said Friday that operational capacity and Haiti's willingness to accept flights will determine how many there will be. The official said progress was being made on negotiations with Haitian authorities.

The official said Friday that the U.S would likely fly five to eight planes a day, while another official expected no more than two a day and said all migrants would be tested for covid-19. Both officials were not authorized to discuss the matter publicly and spoke on the condition of anonymity.

Haitian authorities have agreed to accept at least three flights per day, but Biden officials want to maximize deportations to break the momentum of the influx into the encampment in Del Rio, another official said.

Another U.S. official involved in the planning insisted that the flight operation was not a targeted measure aimed at Haitians, but was the application of U.S. immigration laws allowing the government to swiftly remove border-crossers who arrive in the country illegally.

"This isn't about any one country or country of origin," the official said. "This is about enforcing border restrictions on those who continue to enter the country illegally and put their lives and the lives of the federal workforce at risk."

People continued wading across the Rio Grande on Saturday afternoon, reentering Mexico to purchase water, food and diapers in Ciudad Acuna before returning to the Texas encampment under and near a bridge in Del Rio.

[Video not showing up above? Click here to watch » arkansasonline.com/919inagua/]

Junior Jean, a 32-year-old man from Haiti, watched as people cautiously carried cases of water or bags of food through the knee-high river water. Jean said he lived on the streets in Chile the past four years, resigned to searching for food in garbage cans.

"We are all looking for a better life," he said.

By announcing its intent before launching the flights, the Biden administration also appeared to be hoping that some in the camp would abandon their attempt to remain in the U.S. and would return to Mexico.

But, told of the U.S. plans Saturday, several migrants said they still intended to remain in the encampment and seek asylum. Some spoke of the most recent devastating earthquake in Haiti and the assassination of President Jovenel Moise, saying they were afraid to return to a country that seems more unstable than when they left.

"In Haiti, there is no security," said Fabricio Jean, a 38-year-old Haitian who arrived with his wife and two daughters. "The country is in a political crisis."

Jorge Luis Mora Castillo, a 48-year-old from Cuba, said he arrived in Ciudad Acuna on Saturday and planned to cross into the U.S. Castillo said his family paid smugglers $12,000 to take him, his wife and their son out of Paraguay, the South American nation where they had lived for four years.

"Because to go back to Cuba is to die," he said.

U.S. Customs and Border Protection closed off vehicle and pedestrian traffic in both directions Friday at the only border crossing between Del Rio and Ciudad Acuna "to respond to urgent safety and security needs."

Travelers were being directed indefinitely to a crossing in Eagle Pass, roughly 55 miles away.

Homeland security officials said in a statement Saturday that they would send at least 400 additional Border Patrol agents and other personnel to Del Rio "to improve control of the area."

Haitians have been migrating to the U.S. in large numbers from South America for several years, many having left their Caribbean nation after a devastating earthquake in 2010. After jobs dried up from the 2016 Summer Olympics in Rio de Janeiro, many made the dangerous trek by foot, bus and car to the U.S. border, including through the infamous Darien Gap, a Panamanian jungle.

It is unclear how such a large number amassed so quickly, though many Haitians have been assembling in camps on the Mexican side of the border to wait while deciding whether to attempt entry into the U.S.

The flight plan, while potentially large in scale, hinges on how Haitians respond. They might have to decide whether to stay put at the risk of being sent back to a homeland wracked by poverty and political instability or return to Mexico. Unaccompanied children are exempt from fast-track expulsions.

"Individuals and families are subject to border restrictions, including expulsion," the Homeland Security Department wrote. "Irregular migration poses a significant threat to the health and welfare of border communities and to the lives of migrants themselves, and should not be attempted."

Immigration advocates and some Democrats have been calling on President Joe Biden to suspend all deportation flights to Haiti after the country's president was assassinated in July and a 7.2-magnitude earthquake last month killed at least 2,000 people.

"The Biden Administration cannot claim it is doing everything it can to support the Haitian community while continuing to unjustly deport Haitians as the island weathers its worst political, public health and economic crises yet," Rep. Ayanna Pressley, D-Mass., the co-chair of the House Haiti caucus, said in a statement Friday.

"We have a moral obligation to lead with compassion," she said.

Stephen Miller, the main architect of former President Donald Trump's hard-line immigration policies and a frequent critic of the Biden administration, expressed doubt that Haiti's government would agree to the number of flights for a large-scale operation.

He recounted daily calls with U.S. State Department officials last year over Haiti's resistance to flights, with Haiti relenting only under the threat of sanctions.

U.S. authorities are being severely tested after Biden quickly dismantled Trump administration policies that Biden considered cruel or inhumane, most notably one requiring asylum-seekers to remain in Mexico while waiting for U.S. immigration court hearings.

A pandemic-related order to immediately expel migrants without giving them the opportunity to seek asylum that was introduced in March 2020 remains in effect, but unaccompanied children and many families have been exempt. During his first month in office, Biden chose to exempt children traveling alone on humanitarian grounds.

Nicole Phillips, legal director for the advocacy group Haitian Bridge Alliance, said Saturday that the U.S. government should process migrants and allow them to apply for asylum, not rush to expel them.

"It really is a humanitarian crisis," Phillips said. "There needs to be a lot of help there now."

Mexico has agreed to take in expelled families only from Mexico, Guatemala, Honduras and El Salvador, creating an opening for Haitians and those of other nationalities.

Mexico's immigration agency said in a statement Saturday that Mexico has opened a "permanent dialogue" with Haitian government representatives "to address the situation of irregular migratory flows during their entry and transit through Mexico, as well as their assisted return."

The agency didn't specify whether it was referring to the Haitians in Ciudad Acuna or to the thousands of others in Tapachula, at the Guatemalan border, and it didn't immediately reply to a request for further details.

In August, U.S. authorities stopped migrants nearly 209,000 times at the southern border, which was close to a 20-year high even though many of the stops involved repeat crossers because there are no legal consequences for being expelled under the pandemic authority.

Information for this article was contributed by Juan A. Lozano, Eric Gay, Elliot Spagat, Ben Fox, Alexandra Jaffe and Colleen Long of The Associated Press; and by Nick Miroff of The Washington Post. 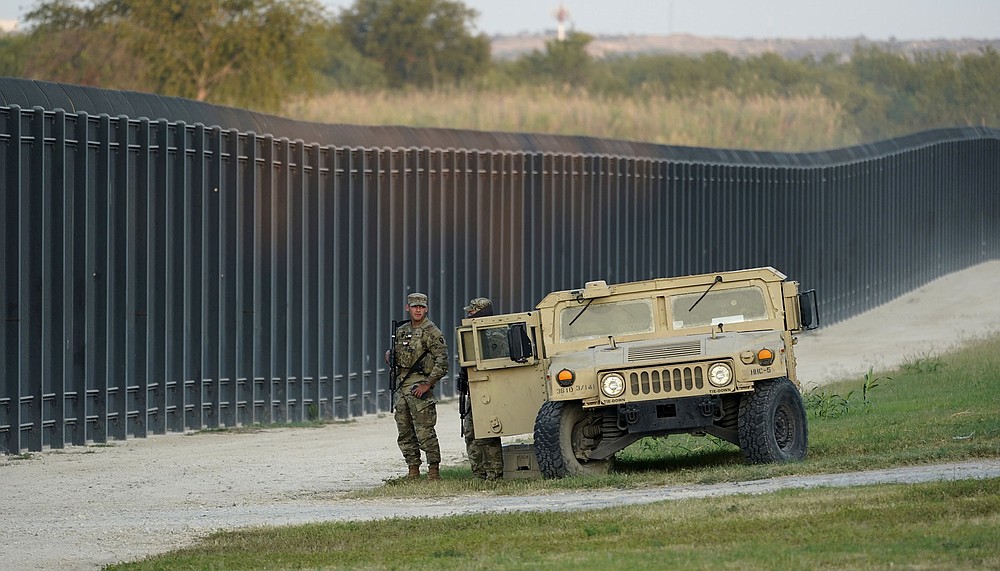 National Guardsmen stand watch Saturday at a fence near the International Bridge in Del Rio, Texas, where thousands of Haitian migrants have created a makeshift camp. (AP/Eric Gay)