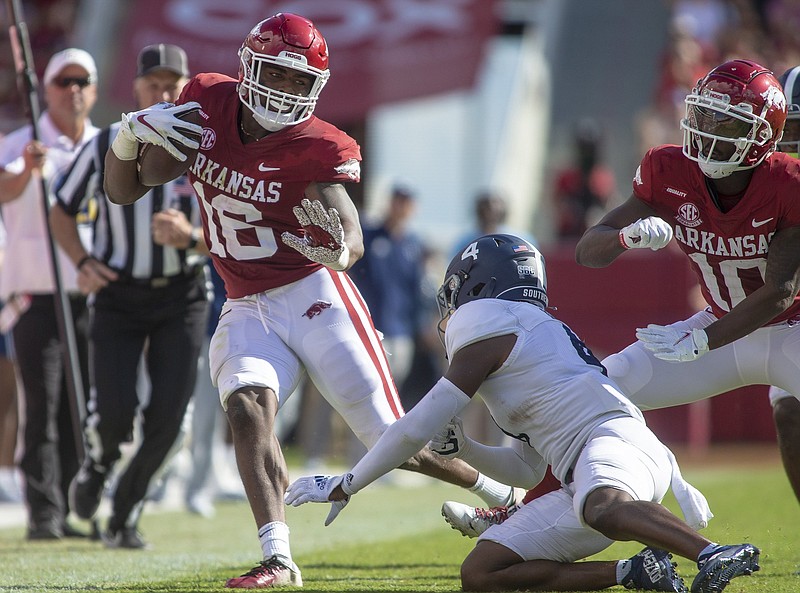 Arkansas wide receiver Treylon Burks (left) caught 3 passes for 127 yards and a touchdown as the No. 20 Razorbacks defeated Georgia Southern 45-10 on Saturday afternoon at Reynolds Razorback Stadium in Fayetteville. (Special to the NWA Democrat-Gazette/David Beach)

FAYETTEVILLE -- University of Arkansas wide receiver Treylon Burks, who by his lofty standards got off to a slow start this season after missing much of training camp with a leg injury, took it into high gear on Saturday.

Burks had three catches for 127 yards, including a 91-yard touchdown play on a short pass from KJ Jefferson, to help Arkansas beat Georgia Southern 45-10 at Reynolds Razorback Stadium.

"Honestly, I was just waiting patiently for my turn to come," said Burks, an All-SEC preseason pick.

Burks' turn for a big play came on the first play of a drive from the Arkansas 9 when he caught a screen pass from Jefferson and raced 91 yards -- picking up key blocks from tight end Blake Kern and receiver Tyson Morris -- for a touchdown to push the Razorbacks' lead to 38-10 with 11:18 left in the third quarter.

It was the second-longest touchdown pass ever for the Razorbacks, surpassed only by Matt Jones' 92-yarder to Richard Smith in 2002 at Tennessee when the Vols beat Arkansas 41-38 in six overtimes.

Jefferson said before the touchdown pass to Burks, offensive coordinator Kendal Briles told him he was going to call the screen if the Eagles gave the defensive look he expected.

"Coach Briles was like, 'If we get this look, we're going to run it right here and just get the ball to him in space,' " Jefferson said. "The main thing was I went out there, looked at the defense, saw we were getting nickel pressure, so I flipped it out to him and it was two-on-two blocking. He had to make the safety miss and that's what he did."

Burks said when the play was called, he expected to score.

"Honestly, before, I had already told Kern ... if he makes his block, it's a touchdown," Burks said. "Before we ever went out there, it was a touchdown."

Burks had five catches for 42 against Rice and uncharacteristically had two drops, but leading into the game his only full practice of the week was on Thursday.

"It's hard to go out there and play without practicing throughout the week," Burks said. "I knew my assignments, but I wasn't comfortable with them.

"Being able to practice the second week and this game right here was tremendous for me, just because I went out there, I knew exactly what I was looking at on the defense, catching the ball.

"It was big. Practice is big."

Expectations were high for Burks coming into this season after he had 51 receptions for 820 yards and 7 touchdowns last season, but Coach Sam Pittman has continually praised his attitude regardless of his stats against Rice and Texas.

"It says it about our team," Pittman said. "Our team wants to win and he's certainly a good player, but he's not selfish, nor is anybody else in that locker room, including coaches.

"We've got a team now and I'm proud that he does [stays positive]. But that's what kind of kid he is. If he did something different I would be shocked."

Burks, who was targeted seven times on Saturday, said stats aren't important to him.

"Honestly, I really don't care if I get the ball at all," he said. "I just want to win. I know the team wants to win, so as long as we get a dub, we get a win, I'm perfectly fine."

Pittman said no Razorback was happier after the Texas game than Burks, who had five catches for 37 yards while Arkansas rushed for 333 yards.

"I think it shows the explosiveness when he has the ball in his hands," safety Jalen Catalon said. "It's just a matter of time.

"We're human. We're going to have games and times where you don't play your best. But I'm proud of him because I've seen him battle through it and I told him the good times are coming -- 'You're going to break out and do what you do,' and that's what he did.

"He broke out and had a great run and caught some key passes and did great on his assignments. So I think he showed that he's still Burks. He's still going to do what he does."