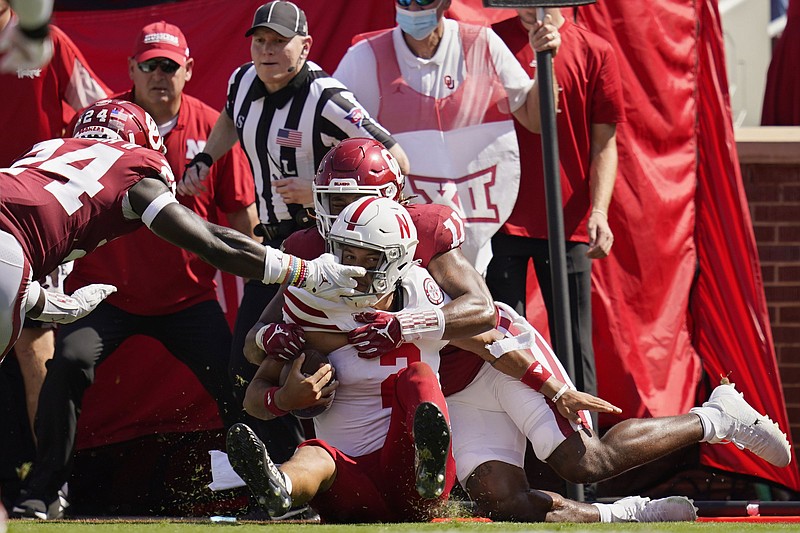 Nebraska quarterback Adrian Martinez (2) is brought down by Oklahoma linebacker Nik Bonitto (11) and linebacker Brian Asamoah in the first half Saturday in Norman, Okla. The No. 3 Sooners held on to win 23-16 in the first matchup between the teams since 2010. (AP/Sue Ogrocki)

NORMAN, Okla. -- Oklahoma and Nebraska played as if they were trying to uphold the history of the rivalry.

Spencer Rattler passed for a touchdown and ran for another, and No. 3 Oklahoma held on to beat Nebraska 23-16 on Saturday.

Celebrating the 50-year anniversary of the "Game of the Century" -- No. 1 Nebraska's 35-31 win over No. 2 Oklahoma in 1971 -- the teams rewarded their nostalgic fans with a competitive contest. The programs had a fierce, yet respectful rivalry in the Big Eight and Big 12, with Nebraska winning five national titles and Oklahoma claiming four between 1970 and 2000.

"It was just a hard-fought game," Oklahoma Coach Lincoln Riley said. "You knew it would be. There's a lot of pride in these two programs. Both these programs have won a lot of games, a lot of championships. To bring this game back -- I think everybody sensed how special it would be. Both teams rose to the occasion and gave us a great college football game."

It was their first meeting since 2010 -- right before Nebraska left the Big 12 for the Big Ten -- and it was memorable and much closer than expected. The Sooners were a three-touchdown favorite and there were even reports during the offseason that Nebraska looked at possibly trying to reschedule the game for its rebuilding program to another year.

Turns out the Huskers were more than game.

Nebraska got the ball trailing by a touchdown with 57 seconds remaining and no timeouts. The Sooners sacked Adrian Martinez twice on the final drive, and the Cornhuskers could not manage a first down.

Martinez passed for 289 yards and a touchdown for Nebraska (2-2), which sought its first win over a ranked team since 2015.

"Our guys aren't into moral victories," Martinez said. "We want to win games. Simple as that. There are definitely a lot of positives to take away from today, and we will do that once we watch the film. But at the end of the day, we lost the game. So that is that."

Oklahoma opened with an old-school 14-play, 75-yard drive. Rattler sneaked in from the 1 to give the Sooners a 7-0 lead.

Nebraska responded with a 14-play drive, but the Huskers were derailed by four penalties. Connor Culp's career-long 51-yard field goal put the Cornhuskers on the board.

Oklahoma led 7-3 at halftime. In the third quarter, Oklahoma's Mario Williams took a pitch and threw backwards to Rattler, who found Marvin Mims open for a 23-yard gain. The Sooners cashed in and took a 14-3 lead when Rattler connected with Jeremiah Hall in the end zone for a 1-yard touchdown pass.

Oklahoma quickly responded. Isaiah Coe blocked the extra point, and Pat Fields returned it 100 yards for two points. It was Oklahoma's first blocked extra point return for a two-point conversion since Zack Sanchez ran one back against TCU in 2014.

Brooks scored on a 2-yard run early in the fourth quarter, and the extra point put the Sooners up 23-9.

Ducks starter Anthony Brown threw for a touchdown and ran for another but left the game at halftime after he was sacked twice to close out the second quarter. It was unclear if he was injured.

The Ducks, coming off their big win last weekend at Ohio State, improved to 3-0 as they head into Pac-12 play next weekend. It was Oregon’s 14th consecutive win at Autzen, as well as its 28th nonconference victory at home.

The Hawkeyes (3-0) have won nine consecutive games. They have won 14th consecutive nonconference games, the second-longest current streak in the nation.

The Hawkeyes' defense got a first-quarter safety when Kent State quarterback Dustin Crum was sacked in the end zone after a bad snap. Crum was 16-of-23 passing for 185 yards and was sacked seven times. Kent State is 1-2.

CLEMSON, S.C. -- Will Shipley ran for two touchdowns and Clemson had a goal-line stand in the final seconds to hold off Georgia Tech.

The Yellow Jackets (1-2, 0-1 ACC) had a chance to force overtime after recovering an onside kick with 1:19 to play. But they were held out of the end zone on four plays from the Clemson 2 in the closing seconds -- the last when linebacker James Skalski tackled Dylan Deveney a yard short.

The chaos continued, though, when Shipley fumbled in the end zone with Clemson (2-1, 1-0) attempting to run out the clock and was tackled after recovering for a safety with seven seconds left. The Tigers kicked the ball away and Georgia Tech quarterback Jordan Yates' last ditch throw with 3 seconds left was ruled an incomplete forward pass, ending the game.

The game was delayed nearly two hours just before the half because of the threat of lightning around Memorial Stadium.

BLOOMINGTON, Ind. -- Desmond Ridder threw the go-ahead touchdown pass early in the fourth quarter, then scored on a 7-yard TD run. Jerome Ford ran for two scores and Tre Tucker scored on a 99-yard kickoff return as the Bearcats (3-0) won their first road game of the season. They've won 12 of 13 since the start of 2020.

Indiana (1-2) lost despite taking a 14-0 lead -- and playing in front of its largest crowd for a non-conference game since September 1987.

The turning point came when starting linebacker Micah McFadden was ejected for targeting late in the first half. The Bearcats, who struggled to move the ball, scored 10 points in the final 93 seconds of the first half and finally took the lead on Ford's 3-yard TD run in the third quarter.

Henderson scored on runs of 5, 48 and 52 yards, which managed to paper over some of the same weaknesses Ohio State showed in a 32-25 loss to Oregon last week that sent the Buckeyes tumbling in the AP Top 25 poll.

As a team, the Buckeyes (2-1) were not sharp. But Tulsa (0-3) couldn't match them blow for blow, and Henderson, who ran for 69 yards in the first two games combined, broke through with some huge plays at critical times. A late interception that Cameron Martinez returned for a 61-yard touchdown made the score look worse than it was for the persistent Golden Hurricane.

SOUTH BEND, Ind. -- Kyren Williams had two long touchdown plays, the second a 51-yard run with 6:05 remaining, and Notre Dame held off Purdue for its 26th consecutive victory at home.

The victory was the 105th in Brian Kelly's 12-year career at Notre Dame, tying him with Knute Rockne as the winningest coach in school history. The Fighting Irish won their eighth in a row over Purdue and first since 2014.

Williams, who scored on a fourth-and-3 pass play of 39 yards from Jack Coan early in the second quarter to give the Irish their first lead 7-3, finished with 86 yards on 11 carries and two receptions for 47 yards.

Coan, who was sacked four times and struggled with his accuracy, completed 15 of 31 for 223 yards and two touchdowns. He connected on a 62-yarder to Avery Davis in the third quarter that put the Irish up 17-6. Davis led the Irish in receptions with five for 120 yards.

The Boilermakers (2-1) outgained the Irish 348-343 thanks to a 291-223 edge through the air and got their only touchdown on a 2-yard pass from Jack Plummer to Milton Wright in the third quarter.

The Mountaineers (2-1) built a 27-7-point lead midway through the third quarter but saw that mostly evaporate due to Virginia Tech's Braxton Burmeister.

Burmeister threw for two scores, including a 29-yard toss to Jalen Holston with 3:10 left. Virginia Tech got the ball back with 2:11 remaining on Jermaine Waller's interception of Doege at the West Virginia 17, but Burmeister threw incomplete on fourth-and-goal from the 3 and West Virginia ran out the clock.

It was one of three Virginia Tech (2-1) drives that stalled inside the West Virginia 10, with the Hokies coming away with no points.

McCall, who entered the day leading the nation in passing efficiency and completion rate, was 13 of 19 for 232 yards with his first interception of the season. Jaivon Heiligh caught four passes for 91 yards and a touchdown for the Chanticleers (3-0), becoming the fourth receiver in school history to surpass 2,000 career yards.

Buffalo (1-2) got within a field goal with 2:41 remaining. Kevin Marks' 7-yard touchdown run capped a 92-yard drive that started when Logic Hudgens intercepted McCall in the end zone. But the Chanticleers held on.

CHAPEL HILL, N.C. — Sam Howell threw five touchdown passes and ran for a career-best 112 yards as North Carolina took over after halftime to beat Virginia. The Tar Heels (2-1, 1-1 ACC) scored touchdowns on all five of their second-half drives, which helped turn a 28-24 halftime deficit into a 52-31 lead on Howell’s short TD throw to Kamari Morales with 12:13 left. And after a first-half shootout with Brennan Armstrong and the Cavaliers (2-1, 0-1), UNC gave up only a field goal in the third quarter while also coming up with Ja’Qurious Conley’s interception.

Tennessee graduate transfer Ty Chandler ran for a career-high 198 yards with two touchdowns, the last coming from 7 yards out with 2:57 left to seal it.

Kenneth Walker III rushed for 172 yards and caught a touchdown pass for the Spartans (3-0), who are off to their best start since 2015. Jayden Reed also had a scoring catch and a touchdown run for Michigan State, which forced Miami quarterback D'Eriq King into four turnovers.

Charleston Rambo tied a school record with 12 catches for Miami, good for 156 yards and both of the Hurricanes' touchdowns.

ANN ARBOR, Mich. -- Blake Corum rushed for 123 yards and three touchdowns. The Wolverines (3-0) scored touchdowns on their first nine drives, eight of them on the ground. The 10th drive also included a touchdown run, but it was called back for a holding penalty and Michigan turned the ball over on downs. The Wolverines never punted.

The Huskies (1-2) kicked a field goal on their second possession of the game, but it was already clear they were in major trouble. Michigan scored short rushing touchdowns on its first four possessions, two by Hassan Haskins, to take a 28-3 lead in the second quarter.

The Wolverines changed up a bit on the fifth possession, scoring on an 87-yard pass from Cade McNamara to Cornelius Johnson -- the third-longest passing play in school history -- to lead 35-3 at the half. 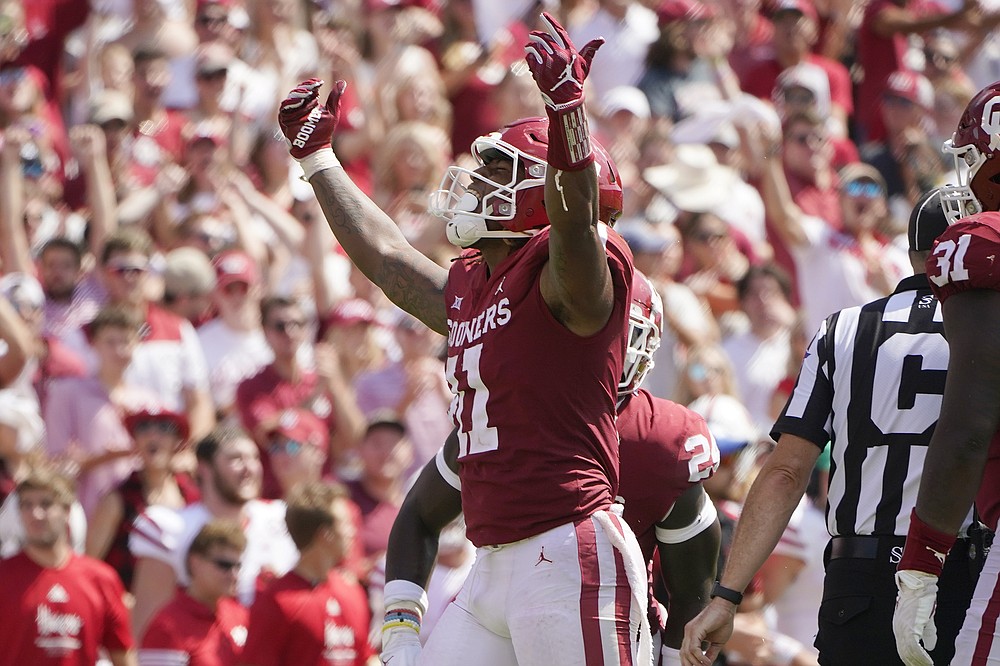 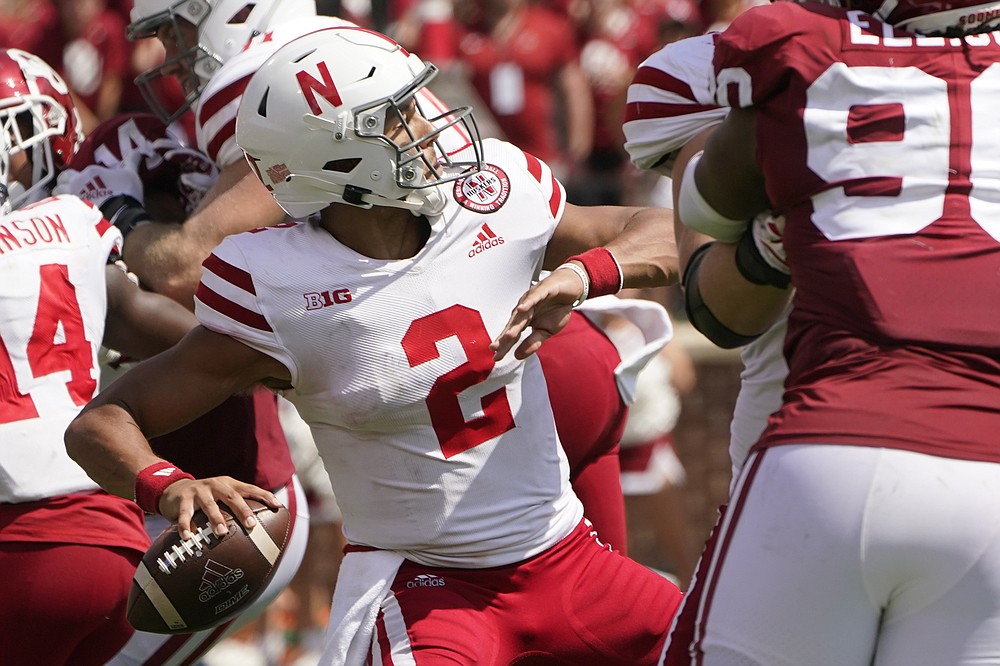 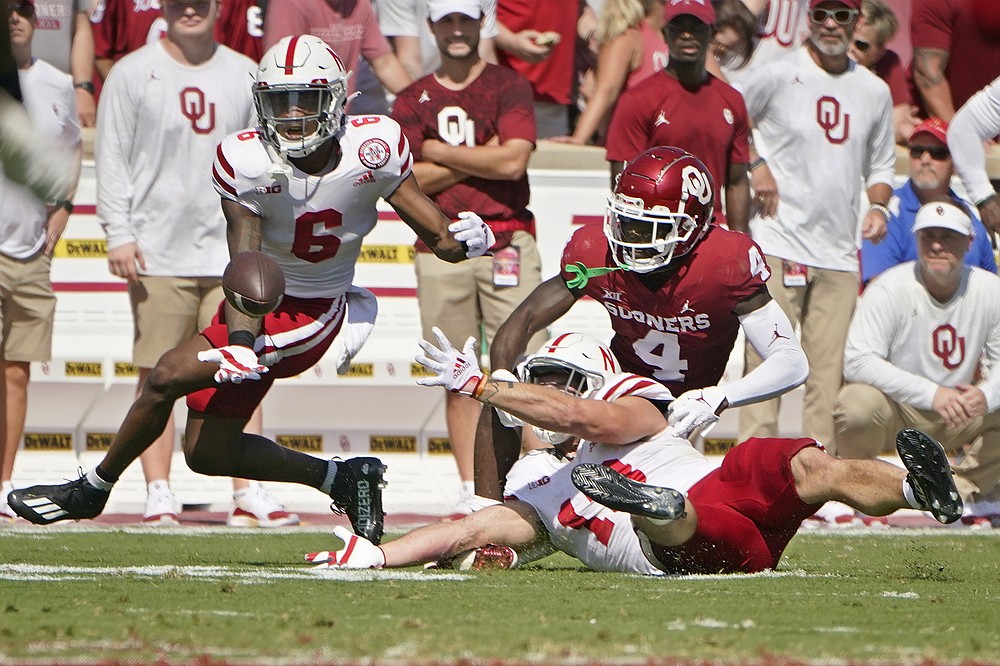 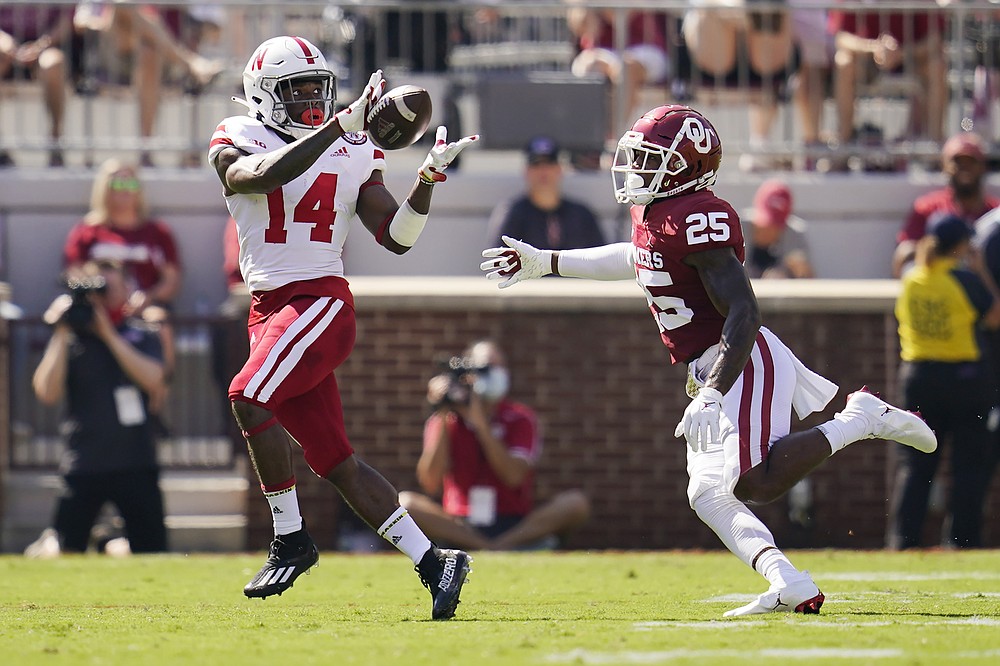 Nebraska running back Rahmir Johnson (14) catches a pass in front of Oklahoma defensive back Justin Broiles (25) in the first half of an NCAA college football game, Saturday, Sept. 18, 2021, in Norman, Okla. (AP Photo/Sue Ogrocki) 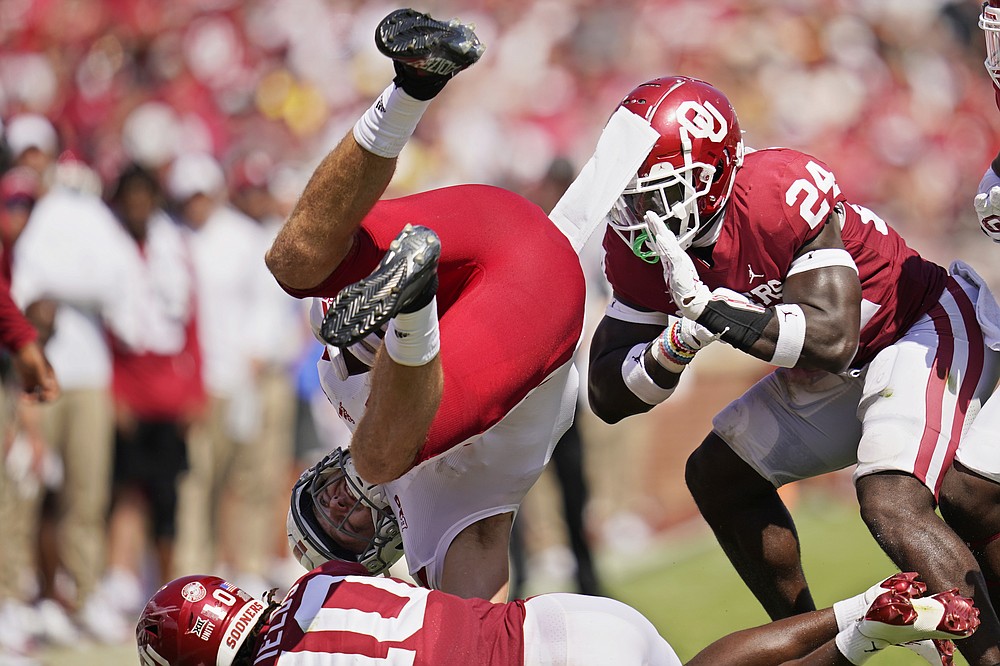