John Walsh, the father of ESPN 5-star prospect Jordan Walsh, was expecting to host University of Arkansas assistant Keith Smart for a visit Tuesday night, but he received a surprise when he opened the door.

"We knew Coach Smart was coming, and we were looking forward to that and lo and behold when he arrived he had Muss [Eric Musselman] in tow," Walsh said.

Musselman and his staff have made the younger Walsh a major priority with hopes of landing him in the 2022 recruiting class. Seeing Musselman reassured the elder Walsh of Arkansas' desire to sign his son.

"We were pleasantly surprised," Walsh said. "Of course, it's always good to see Coach Smart but when Coach Muss came to the door, it was really exciting to have him in our home for the visit as well. It just just kind of shows us the level of commitment and buy-in he has in our son. Just kind of reassures us as parents about him as a coach. So it was really great."

Jordan Walsh, 6-7, 200 pounds, played at Oak Cliff (Texas) Faith Family Academy as a junior and was to play his senior season at Southern California Academy in Castaic but recently opted instead to play at Link Academy in Branson.

He, his father, mother Sandra and twin brother Joshua made an official visit to Fayetteville in June. They also officially visited TCU and Oklahoma during the summer.

Basketball prospects can take five official visits as a junior and five more starting Aug. 1 of their senior year. He officially visited Arizona State last weekend and is expected to leave Austin today after visiting the Longhorns. Visits to Memphis and Kansas are also on the agenda.

Jordan, who ESPN rates as the No. 2 small forward and No. 7 overall prospect in the nation, plans to participate in the Joe Wootten McDonald's All-American game evaluation camp in Mansfield, Texas, on Oct. 1-2.

Musselman and Smart hit on several topics during the 1 hour, 45-minute visit.

"We talked a lot about basketball, and he [Musselman] kind of reiterated some things from our visit about how they felt about Jordan and how they felt like he would be a really good fit for the program," Walsh said. "The system style of basketball he plays at Arkansas which was really good. He talked about how he felt like Jordan was really a special player and he felt like he was going to really get a lot of attention and popularity I guess if you will playing at Arkansas based on the fan base."

The conversation with Musselman flowed smoothly.

After his son's official visit to Fayetteville, the elder Walsh said touring Walton Arena was one of the highlights of the trip. All the seats in the fifth largest on-campus facility in the nation are on pace to be sold for the upcoming season.

"I think it's the largest we've visited so far with 20,000 and it's already just about sold out," Walsh said. "He [Musselman] talked about ticket sales are within a thousand or fifteen hundred of being completely sold out."

Walsh made sure to point out how he and his family felt about the Arkansas fans.

Fresh off an Elite Eight appearance, excitement for Razorback basketball is at it's highest since the Nolan Richardson era. The level of enthusiasm has Musselman feeling good about the support the program is receiving for the student-athletes and name, image and likeness.

"I think he said he's really excited the support now that they're learning more about NIL and how it works," Walsh said. "He was excited to know about the level of support the program is going to get. How excited people are about the program."

Since arriving in Fayetteville, Musselman's wife, Danyelle, has been active in the community and the program.

"He talked about his wife being involved, helping him because she's a very popular person," Walsh said.

"It's nice to know a guy in his position values what his wife contributes," Walsh said. "That speaks volumes about him as a man. It really does."

He said his son's college decision-making process is several weeks away.

"We'll probably sit down at the end of October," Walsh said. "We'll get a chance to complete all the visits and put our cards on the table and sit down as a family and talk about each visit. Pros and cons." 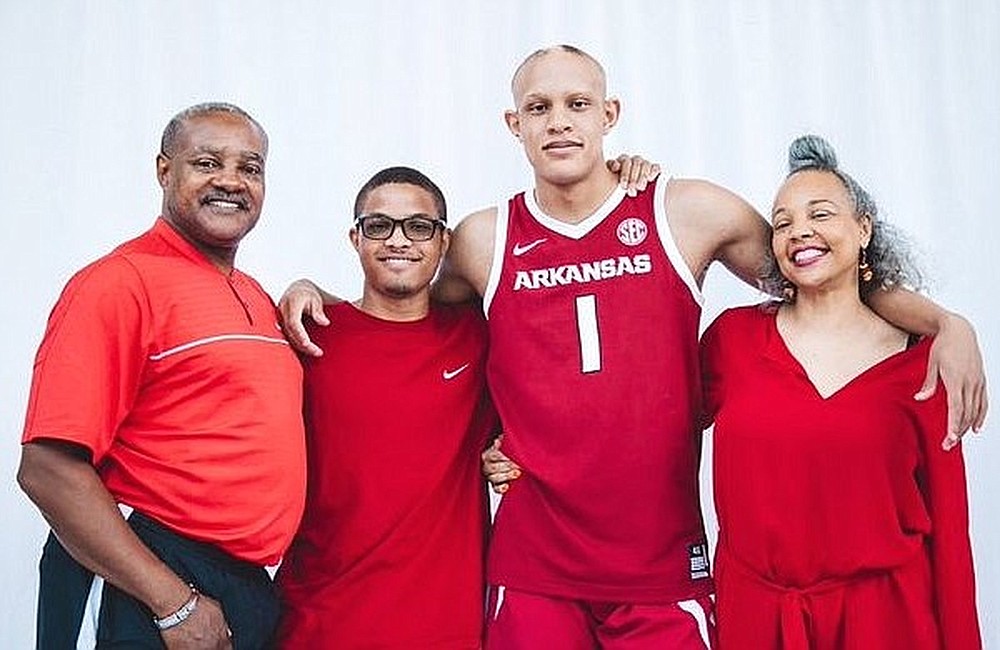 Jordan Walsh (second from right) poses with his father John (far left), brother Joshua and mother Sandra during his official visit to the University of Arkansas in June. The Walsh family hosted Coach Eric Musselman and assistant Keith Smart on Tuesday. (Submitted photo)