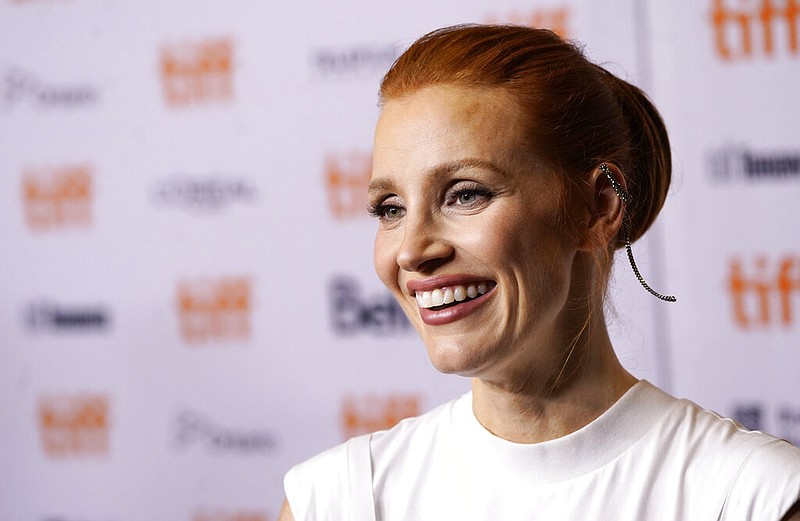 Jessica Chastain, a cast member in "The Eyes of Tammy Faye," smiles at the premiere of the film at the 2021 Toronto International Film Festival, Sunday, Sept. 12, 2021, in Toronto. (AP Photo/Chris Pizzello)

Academy Award-nominated actor Jessica Chastain is bringing her film “The Eyes of Tammy Faye” to the Arkansas Cinema Society’s “Filmland in the Park” Oct. 2 on the lawn, 1200 McMath Ave., in Little Rock’s MacArthur Park.

The film, directed by Michael Showalter with a screenplay by Abe Sylvia, recently received its world premiere at the Toronto International Film Festival. Chastain is also one of the producers.

Chastain will take the stage with Cinema Society co-founder and director Jeff Nichols after the screening for a discussion of her performance and career as actor and producer.

“I’ve known Jessica since we worked together on our film 'Take Shelter,’” Nichols said. “It was exciting to be on that set and watch the immense talent she’d bring every day, and it’s been equally exciting to watch how her career has evolved and exploded over the last decade. I truly consider her one of the best actors working today.”

• Oct. 2: Filmmaking Lab for Teen Girls Short Screening, and “The Eyes of Tammy Faye,” followed by a live question-and-answer session with Chastain

Ticket information is available at www.arkansascinemasociety.org. Members of the Arkansas Museum of Fine Arts can receive 10% off tickets.