'Average' Aggies next up for Hogs 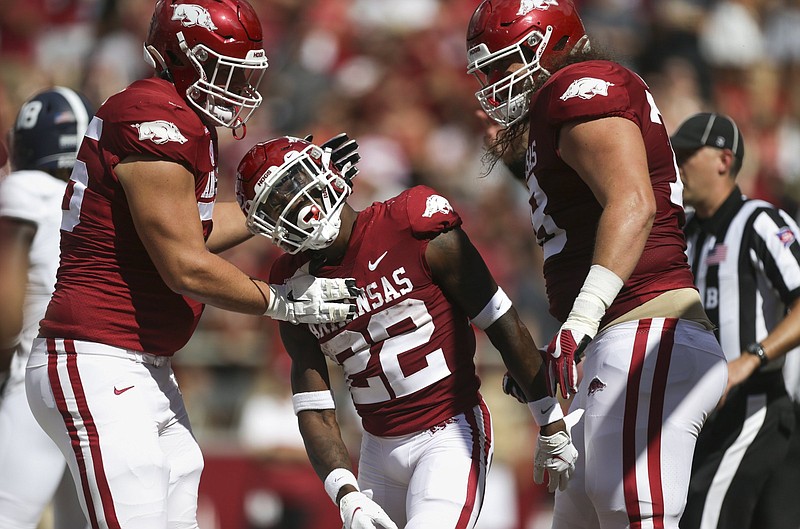 FAYETTEVILLE -- When CBS announced last week it had chosen the game between the University of Arkansas and Texas A&M for the network's national telecast at 2:30 p.m. on Saturday, it was banking on the Razorbacks and Aggies taking care of business at home in non-conference play.

The Razorbacks beat Georgia Southern 45-10 and Texas A&M beat New Mexico 34-0 to set up a top 25 matchup at AT&T Stadium in Arlington, Texas.

It will be the SEC opener for both teams.

Arkansas on Sunday moved up to No. 16 from No. 20 in The Associated Press poll. The Aggies are ranked No. 7.

The Notre Dame-Wisconsin game is the only other matchup Saturday with two ranked teams.

"We don't look at the schedule, but when you've already played it you do a little bit," Arkansas Coach Sam Pittman said. "I'm proud to be 3-0. Not me, our team and our coaches."

Texas A&M will be the second ranked team the Razorbacks have played this season and among five left on the schedule.

Arkansas beat Texas 40-21 on Sept. 11 when the Longhorns were ranked No. 15. That victory lifted the Razorbacks to their first national rankings since 2016.

"It feels great," Arkansas sophomore safety Jalen Catalon said. "I mean, 3-0, it's an honor. You have to look at it and praise it.

"I don't want this to be the highlight of our season. I want us to keep going each week and make more and more highlights for our season."

Texas A&M is off to its first 3-0 start in Jimbo Fisher's four seasons as coach.

Colorado threw a scare into the Aggies in the second game this season, but Texas A&M rallied to win 10-7 in Denver after losing starting quarterback Haynes King to a broken leg.

Zach Calzada threw the game-winning touchdown pass against Colorado, and in his first start he completed 19 of 33 passes for 275 yards and 3 touchdowns with 1 interception against New Mexico.

Despite the lopsided victory, Fisher wasn't overly impressed by his team's performance.

"We're playing very average," Fisher said. "I mean, we're much more capable in what we can do.

"Listen, potential is the worst thing you can have. That means you ain't done it. I hate the word 'potential.' Somebody says you got 'potential,' that drives me nuts.

"That means I'm not coaching right and they're not playing right. ... We've got to grow up across the board and in everything we do and play with much more consistency as a team and learn to play off each other."

Fisher said Texas A&M has to be ready to attack its SEC schedule, which like Arkansas has No. 1 Alabama, No. 13 Ole Miss and No. 23 Auburn as well as LSU and Mississippi State after Saturday's game.

The Razorbacks also get to play at No. 2 Georgia and have their annual division cross-over game against Missouri. Texas A&M has Missouri as its rotating SEC East opponent and South Carolina on an annual basis.

"You're going to play real teams," Fisher said. "This is the SEC West. It don't get no better. This is as good a ball as there is.

"We need to get fundamentally better and get a nastier, meaner, tougher, more competitive attitude."

Arkansas has lost nine consecutive games to the Aggies, all since Texas A&M joined the SEC.

"We're so excited to go in there and play them to see what happens," Pittman said. "I'm sure they are [excited to play] us as well.

"We've got a week to get prepared for them and we will. We're banged up and we've got to get healthy. I'm sure they've got some injuries too.

Print Headline: 'Average' Aggies next up for Hogs