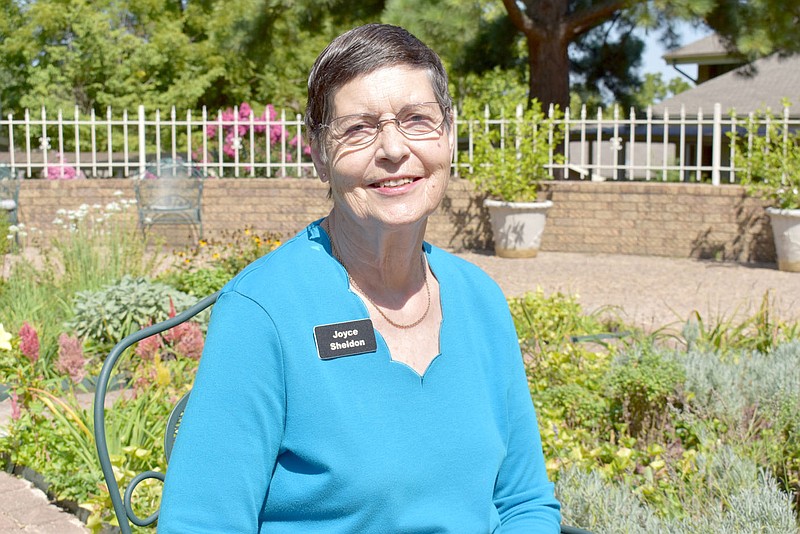 She graduated from high school in Dewitt, Iowa, and went to the University of Iowa Quad Cities Hospitals School of Medical Technology. She graduated from there as a registered medical technologist. She worked in a lab analyzing body fluids and specialized in blood banking.

After graduating from college, she married her first husband, Lynn Garlough. He was drafted, and they moved to Germany for a year. They lived in a rural area in southern Germany.

"It was very interesting. I liked it," she said.

They had a daughter, Christine. The couple was married 10 years, but things didn't work out, she said.

After that, she moved to Cedar Rapids, Iowa, where she taught blood banking to medical technology students.

Then she met and married her second husband, George Sheldon. They moved to Fairfield, Iowa, and Joyce became a supervisor at Southeast Iowa Blood Center in Ottumwa, Iowa.

She and George did quite a bit of traveling. They enjoyed snow skiing, and their favorite place to go was Jackson Hole, Wyo. George has two genetic sons and an adopted daughter, all of whom Joyce thinks of as her own, along with her daughter. They have four grandchildren.

The couple moved to Bella Vista in 1994, with George retiring early because he had a congenital eye problem, she said. They liked the area and the people. They bought a fixer-upper house on Lake Avalon, she said. They took a few trips around the United States and Europe, and they got involved in community activities.

They both had a love of music, so they joined the community band. They joined Highlands United Methodist Church and sang in the choir. They played handbells with The Village Ringers. They also played in the Ozark Mountains British Brass Band.

"When he became legally blind, we felt we needed to move to Concordia," she said. That was in 2011.

She started a handbell choir at their church at that time and got involved in working in the gardens at Concordia, taking a master gardeners' course. George died in 2017.

"He was my best friend and the love of my life -- best thing that happened to me," she said.

Joyce now keeps herself busy with activities at Concordia and at her church. She participates in the book club, works in the flower gardens and is in the hand chime choir at Concordia. She is also the director of handbells at her church, where she sings in the choir and makes cookies for the cookie walk.

"I keep active and I really enjoy Bella Vista and Concordia," she said. "I don't let any grass grow under my feet."

She added, "I loved my career. I enjoyed my profession and I enjoyed my avocation in music. Music is something you can enjoy all your life."

Print Headline: 'I don't let any grass grow under my feet'