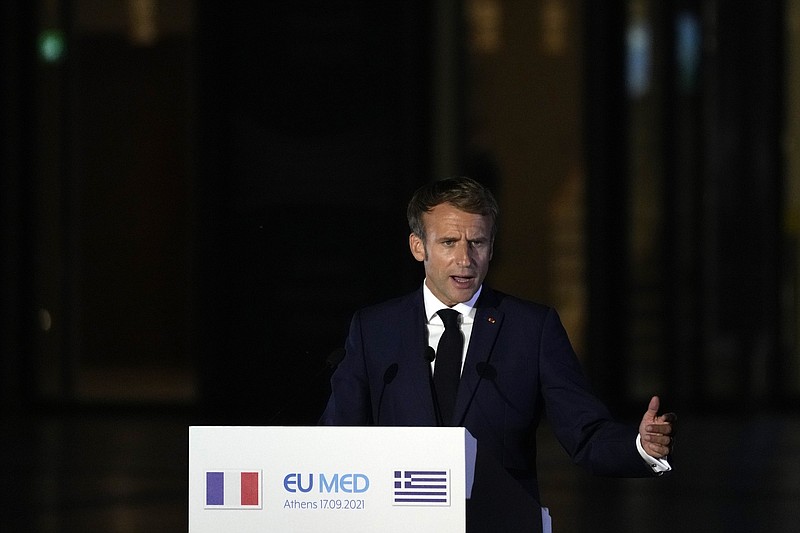 French President Emmanuel Macron makes statements during the EUMED 9 summit at the Stavros Niarchos Foundation Cultural Center in Athens, Friday, Sept. 17, 2021.The leaders of Europe's Mediterranean countries pledged Friday to expand cooperation against climate change, at a meeting in Athens held in the aftermath of massive wildfires that ravaged parts of southern Europe. (AP Photo/Thanassis Stavrakis)

PARIS -- French President Emmanuel Macron will speak in the coming days with President Joe Biden in their first contact since the start of a diplomatic dispute between France and the United States over a submarine deal involving Australia, an official said Sunday.

The phone call is at the request of Biden, French government spokesman Gabriel Attal said, adding that there was initial "shock" and "anger" in France over news of the deal. But now it's time to try to move forward, he said.

What the French have called a "grave crisis" began with the surprise end of a 2016 contract worth at least $66 billion for France to build 12 conventional diesel-electric submarines for Australia. Instead, Australia signed on with the U.S. and Britain for eight nuclear-powered submarines. France insists it was not informed of the deal in advance.

France recalled its ambassadors from the U.S. and Australia in a sign of the seriousness of the issue.

Foreign Minister Jean-Yves Le Drian met Sunday with the two ambassadors to discuss "the strategic consequences of the current crisis," the Foreign Ministry said without elaborating.

Le Drian on Saturday denounced what he called the "duplicity, disdain and lies" surrounding the sudden end of the contract and said France was now questioning the strength of its alliances.

"What's at play in this affair, this crisis ... are strategic issues before being commercial issues," Attal said on BFMTV. "The question is ... the forces present, the balance, in the Indo-Pacific where part of our future is at play, and our relations with China."

The deal by the U.S. reflects the nation's pivot toward the Indo-Pacific region, seen as an area of strategic importance as China bolsters its influence there. But France has long had a strong presence in the region, and it, too, is working to expand its influence.

"France is a country of the Indo-Pacific," Attal said, noting the French territory of New Caledonia, the French citizens living in the region and the French military forces based there.

Macron will seek an explanation from Biden about what led to a "major rupture in confidence," the spokesman added.

France won the contract in 2016 over offers from Germany and Japan. The Shortfin Barracuda was to be a nuclear submarine design adapted to be powered by diesel on the surface and battery underwater.

France accused Australia of concealing its intentions to back out of the contract, but Australian Prime Minister Scott Morrison said Sunday that France "would have had every reason to know that we have deep and grave concerns" about the capability of the submarines, which he said can't meet his country's strategic interests.

In explaining the change, Morrison cited a deteriorating strategic environment in the Indo-Pacific. He did not specifically mention China's military buildup, which has gained pace in recent years.

"The capability that the attack-class submarines were going to provide was not what Australia needed to protect our sovereign interests," Morrison said, adding that "we have made very clear that we would be making a decision based on our strategic national interest."

Under the contract with the U.S. and Britain, Australia's first nuclear submarines are not expected to be delivered until close to 2040.

Defense Minister Peter Dutton said the government was prepared to lease nuclear submarines from the U.S. while Australia's fleet was being built.

Dutton and Foreign Minister Marise Payne are in the U.S. for annual meetings with their counterparts, their first such talks with the Biden administration.

Morrison is flying to the U.S. today for a meeting with Biden and the leaders of India and Japan.

Information for this article was contributed by Rod McGuirk of The Associated Press.