Loss felt from elimination of only dance degree program in Arkansas 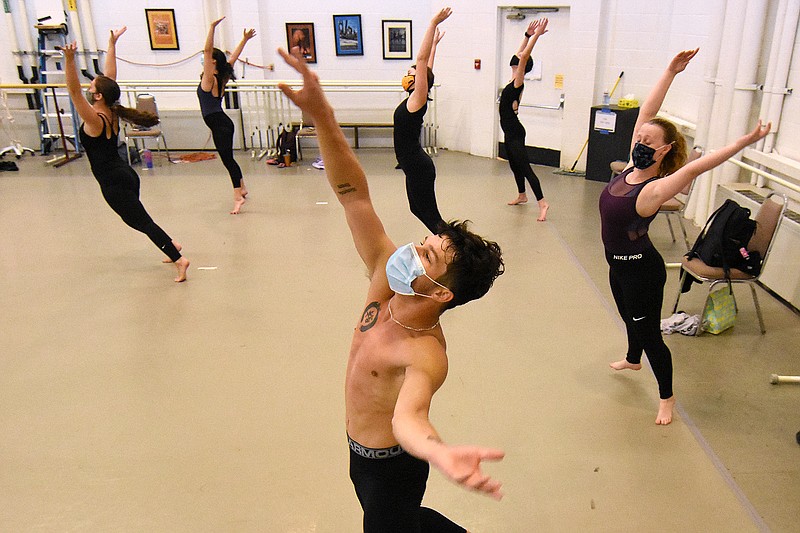 Dance enthusiasts continue to mourn the loss of a degree program at the University of Arkansas at Little Rock, the only one of its kind in the state.

There's some hope another university in Arkansas will step up to offer a dance degree, said Stephanie Thibeault, formerly a tenured associate professor of dance at UALR.

But nothing is certain, said Thibeault, who is continuing on at UALR this year as a visiting assistant professor to help students remaining in the dance program complete their degrees.

"Dancers across the state need somewhere to be able to study dance without having to leave the state to go to college. It's been a need for a long time," said Thibeault. "I am in discussions with people about trying to see if that could happen."

Thibeault said she's reached out to the University of Arkansas, Fayetteville, among other schools.

"A year ago I would have said it's a longshot, it's a dream. I think now I would say it could be possible, and, of course, I'm hopeful that it will be," Thibeault said.

A spokesman for UA-Fayetteville said there are no plans to offer a degree in dance.

Among those hopeful that a university will again offer a dance degree is Christen Burke Pitts, founder and director of the theatre dance program and dance troupe at North Little Rock High School. She said she's had several of her students go on to study dance and pursue a bachelor of arts or bachelor of fine arts degree at UALR.

The university in 1999 dropped its dance major but brought it back 10 years later as a bachelor of fine arts program.

"Before the BFA program at UA Little Rock, students had to go out of state to get a BFA or a BA in Dance as our state didn't offer that degree. I was so happy when UA Little Rock had this program again," Pitts said in an email.

Several of her students have gone on to careers in dance, dance education, theatre or film, she said.

"I have high hopes that this wonderful program will continue at another university in our state," she said, adding that "students can only receive a minor in dance at a few colleges/universities in Arkansas."

UALR cut its dance degree program as part of a wider restructuring effort known formally as academic retrenchment. The university took action under Chancellor Christina Drale after years of declining enrollment with some financial deficits.

"It absolutely breaks my heart that this is the way the university decided to go, and I think it's a great loss for the state," said Thibeault.

Ann Bain, UALR's executive vice chancellor and provost, in a statement said the university "remains committed" to programming and partnerships in the arts.

"The difficult decision to eliminate the BFA Dance program was made to ensure the future sustainability of the institution to continue to offer vibrant and viable programming in the arts, STEM, pre-professional, and liberal arts disciplines in Central Arkansas for many years to come," Bain said.

The University of Arkansas Board of Trustees during its two-day meeting Thursday and Friday formally approved deletion of the bachelor of arts dance degree program at UALR. The 10-member board had already approved UALR's wider academic retrenchment plan last year.

"A university dance program in a state that is lacking that entirely has so much potential to be a major contributor to the cultural landscape," Castleman said.

She said having students leave the state for their dance education could mean that their careers never lead them to return to their home state.

"There are very few opportunities for dancers to train and then move into a career -- either teaching or dancing or as a choreographer -- that don't come most naturally out of the location where you receive your training or the relationships built in that process," Castleman said.

In Arkansas, UALR's dance program -- or at least an attempt to showcase it on a highway billboard -- came under fire from a state legislator in 2018.

State Sen. Bart Hester, R-Cave Springs, posted a photo of the UALR billboard and wrote on Twitter: "Why higher ed does NOT need increase funding. They lease a sign to encourage computer science degrees or math teachers? No they push for dance majors. Lots of hardworking Arkansans subsidizing this! Not ok @UALR."

UALR documents listed the 2019-20 budget for theatre arts and dance as $814,512, with salaries and benefits for 12 employees making up $791,051 of the total. The current fiscal year's budget lists $376,956 for the costs associated with theatre arts/dance at UALR, including salaries for five employees.

Karen Schupp, an associate professor of dance at Arizona State University, has written a textbook on dance instruction.

Dance instruction has moved beyond being mainly a studio activity to something done widely in community centers, Schupp said. She said performance opportunities have also grown, with television and social media putting more of a spotlight on dance.

Job outlook projections from the federal Bureau of Labor Statistics show expected growth in a field that employed 13,600 in 2020, according to the bureau.

"Overall employment of dancers and choreographers is projected to grow 31 percent from 2020 to 2030, much faster than the average for all occupations," states the bureau's Occupational Outlook Handbook website. The median pay last year was $19.11 per hour, according to the bureau.

"I feel very strongly that the dance major is more relevant today than it ever has been," Schupp said, adding that skills learned through dance such as collaboration and problem-solving "have incredible application" in careers besides dance and choreography.

Schupp said pursuing a dance degree is not "frivolous or easy," and dancers "really are thinking in ways that other students on campus are not, that I think gives them an advantage post-graduation."

It's rare for a state not to have any universities offering a dance degree program, Schupp said.

Data from the nonprofit College Board lists two universities in Mississippi, for example, offering dance degrees: Bellhaven University, a private Christian college, and the public University of Southern Mississippi.

In Louisiana, one school is listed, the private Tulane University, though another college, Northwestern State University, on its website states that a bachelor of fine arts in dance is offered. Four colleges in Oklahoma are listed by the College Board as offering dance degrees.

Schupp, like Castleman, said that a state loses out when dancers leave to train elsewhere.

"The fact that there's no place for people to study dance, that's going to change who has access to dance in the whole state," Schupp said. "You go to college, maybe you want to perform. When you get there, you figure out you want to teach. [Then] you give that knowledge back to your community."

Ryann Young earned a bachelor of fine arts degree in dance from UALR this past May.

"I loved the program so much," Young said in a phone interview. She also was a Donaghey Scholar at UALR, an honors program that accepts 20-25 students yearly and offers financial support totalling between $75,000-$95,000, according to the university's website.

Young is from Lonoke, about 25 miles east of Little Rock, and called it a "no-brainer" to attend UALR. But she said having the opportunity to major in dance was key to her decision.

Without the option of majoring in dance, "I probably would have gone out-of-state," Young said.

Now teaching a couple of nights each week at a dance studio in Cabot, Young said she plans to pursue a master's degree in dance with the goal of becoming a dance professor.

In the Cabot dance studio, students have told her they want to pursue a dance career, she said.

"I fully believe in them, and hope they will be able to follow these dreams without leaving the state. Arkansas not only needs a collegiate dance program, it deserves one," Young said in an email.

She said she's from Jonesboro, but didn't go to college in Arkansas because at the time no university offered a bachelor of fine arts dance degree.

The chance to help revive the UALR program was a major draw for her, and she said enrollment fluctuated but the program typically had between 25 and 30 dance majors.

With UALR no longer open to new dance majors, "there are dancers all over the sate that are calling me and texting me," Thibeault said. Several have started degree programs in a different major or gone outside the state for college, she said.

"I'm hoping something can happen that we can once again offer dance for people in the state," Thibeault said.

Print Headline: Loss felt from elimination of only dance degree program in Arkansas