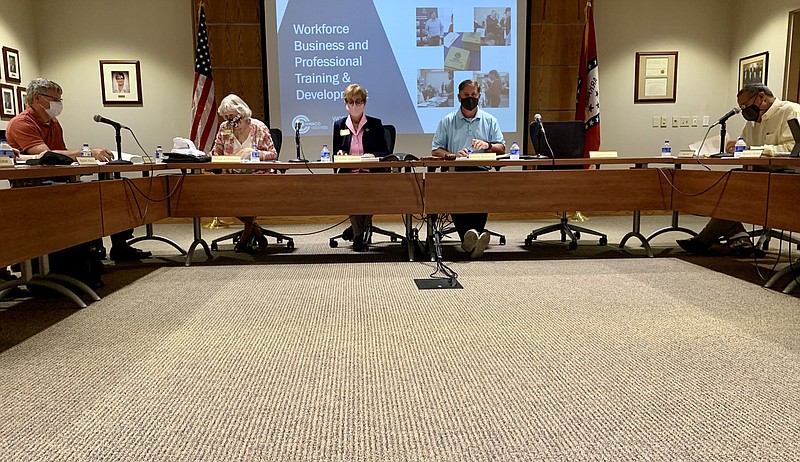 The college received a more than $288,000 Regional Workforce Grant from ADHE in May to begin establishing the training, said Eve Aldridge, college training and community development director, Monday during a Board of Trustees meeting.

"It's time to start planning and to identify what we're going to do with this," Aldridge said of the grant.

The simulator will be used to teach basic operations beginning in the fall of 2021, she said, and behind-the-wheel training will begin in the spring or summer.

The training will take 160 total hours to complete, Aldridge said.

The simulator will help lower overall training costs by preventing wear and tear on trucks by inexperienced drivers as they learn basic truck driving skills, she said.

The simulator is located in a trailer on campus, Aldridge said, noting the college will be working with partners to activate its training scenarios at the end of September.

"The beauty of the simulator is you can program it," said Evelyn Jorgenson, college president.

She said the simulator can be programmed with scenarios such as large city driving conditions or snowstorms, which may not be feasible for students to experience in Northwest Arkansas.

A minimum of four to six students will be able to participate in each class, Aldridge said, adding several classes will be offered annually.

Truck driver positions are anticipated to grow by almost 6% nationally through 2028, she said, with 1 million jobs anticipated being needed through 2029.

Arkansas has had as many as 2,000 truck driver openings in recent days, Aldridge said. Some 472 of those positions were in Northwest Arkansas, she said.

Ron Branscum, Board of Trustees chairman, provided an update following the meeting on the search to replace Jorgenson. The 68-year-old Jorgenson began as the college's third president in 2013 and has worked in education for 48 years. She'll retire when her contract ends June 30, 2022.

Branscum said a search firm has not yet been selected to provide a nationwide search of candidates. One of four firms will be selected during an upcoming selection committee meeting in the next couple of weeks, he said.

In other news, Lucas Pointer, board member, provided an update on the construction of the Physical Plant building.

The land has been cleared of trees and dirt has been moved to level the development space, he said.

"It was solid forest. It was like a jungle," Pointer said.

Work on the building's foundation has also begun, he said.

The Board of Trustees in May granted administrators permission to move forward with the approximately $2.6 million project.

The building is being constructed just west of the college's National Child Protection Training Center on land the college bought from Mercy Hospital last year, according to administrators.

The building houses the facilities planning and construction department, he said. It's also where the college stores vehicles and equipment.

The college's current building, which is closer to the center of campus, will be converted into educational space, according to administrators.

The project is being funded through $713,122 the college received from selling some of its land to accommodate expansion of the adjacent Interstate 49 and $2.3 million from the college's capital fund, administrators said.

The plant is scheduled to be completed February, Pointer said.

The development is being completed by Legacy Construction Management of Fayetteville, Thompson said.

Go to https://www.nwacc.edu/aboutus/collegeleadership/botmembers/default.aspx to learn more about the nine members of Northwest Arkansas Community College’s Board of Trustees.

This story has been updated with clarifications.