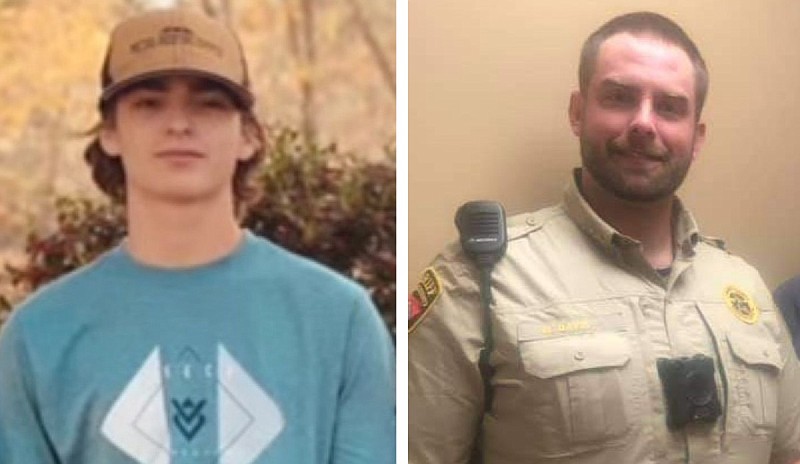 Hunter Brittain (left) and then-Sgt. Michael Davis of the Lonoke County sheriff's office are shown in this undated compilation of courtesy photos.

A former Lonoke County sheriff's deputy charged with felony manslaughter in the June 23 shooting of 17-year-old Hunter Brittain was released on a $15,000 bond Monday after spending the weekend in jail at an undisclosed location.

Michael Davis, 30, appeared before 23rd Circuit Court Judge Ashley Parker in a small courtroom in the Lonoke County sheriff's office early Monday. The room was staffed by county deputies, Davis' former co-workers, and limited space for the public was offered to about a dozen of Brittain's family and a handful of those there in support of Davis.

Special Prosecuting Attorney Jeff Phillips, who announced the charges during a news conference Friday, requested the $15,000 bond, which was agreed to by Davis' attorney, Robert Newcomb.

The bond came with stipulations that no other crimes be committed and that Davis could not use a firearm or alcohol, Parker said. He said Davis would be subject to regular drug screening by the court and should have no contact with Brittain's family.

Newcomb requested that Brittain's family also not contact Davis. The judge did not make an official order but reminded everyone that any unlawful behavior could result in a charge.

A Nov. 15 court date has was set by Parker during the proceeding. Newcomb has previously said Davis will plead innocent to the charges.

Richard Payne, Brittain's grandfather who raised him in the last years of his life, said Monday that this is just the beginning.

Rebecca Payne followed her husband's comment with, "We want a conviction because this is a felony charge."

Phillips said previously that bond is not decided on the charge but whether a judge thinks a defendant will appear in future court proceedings.

"If that person doesn't have prior convictions, then his bond is lower," Phillips said. "If he is a resident of the area and hasn't had any FTAs, failures to appear, then that bond is going to be lower."

Phillips, of the 5th Judicial District, was named special prosecutor for the case July 12 after Lonoke County Prosecuting Attorney Chuck Graham recused from the case.

Davis faces three to 10 years in prison if convicted of the felony charge.

The deputy fired one shot that struck Brittain in the neck during a 3 a.m. traffic stop south of Cabot at 7180 89 South, according to an affidavit released Friday. It states Brittain exited his truck and moved to the rear of the vehicle as it rolled backward toward the front of Davis' patrol car.

Davis told investigators that he didn't see Brittain's hands before shooting but gave verbal commands to get back in the car and show his hands, the affidavit states. It says Davis saw a container fly from the Brittain's hands and land on the ground as the bullet struck the teen.

Crump and Jacob represented the family of George Floyd, a 46-year-old man who died last year while in police custody in Minneapolis and whose death sparked a wave of protests across the nation focused on police brutality and racism. Officer Derek Chauvin was convicted of murder in Floyd's death.

Attorneys for Brittain's family have said the teen, who was up late working on his truck's transmission, was grabbing a blue plastic bottle of antifreeze to place behind the wheel because the vehicle wouldn't shift into park.