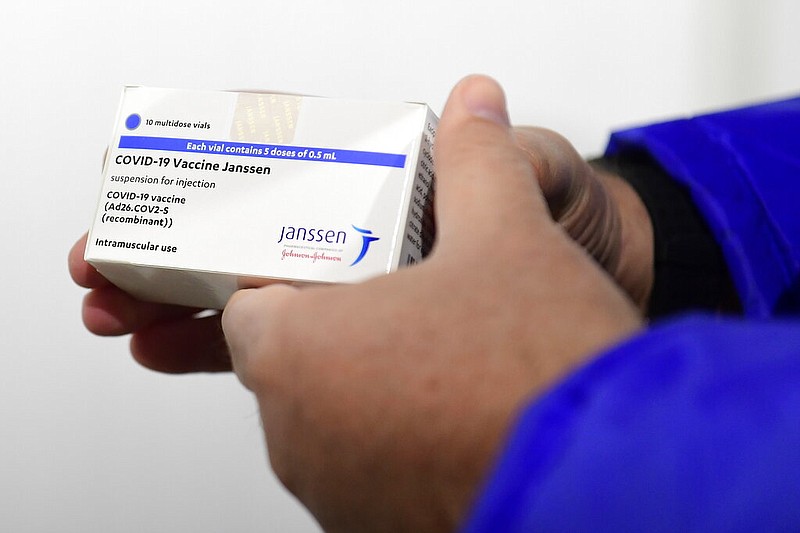 FILE - In this April 13, 2021, file photo, a box of Johnson & Johnson vaccines are shown by pharmacist Zsolt Szenasi at a warehouse of Hungaropharma, a Hungarian pharmaceutical wholesale company, in Budapest, Hungary. (Szilard Koszticsak/MTI via AP, File)

Johnson & Johnson said in statement Tuesday that it ran two early studies in people previously given its vaccine and found that a second dose produced an increased antibody response in adults from age 18 to 55. The study's results haven't yet been peer-reviewed.

"A booster dose of the Johnson & Johnson covid-19 vaccine further increases antibody responses among study participants who had previously received our vaccine," said Dr. Mathai Mammen, global head of research and development at Johnson & Johnson. The company previously published data showing its one-shot dose provided protection for up to eight months after immunization.

Johnson & Johnson said it is now in talks with regulators including the U.S. Food and Drug Administration, the European Medicines Agency and others regarding using booster doses of its vaccine.

Johnson & Johnson's vaccine is approved for use in the U.S., across Europe and there are plans for at least 200 million doses to be shared with the U.N.-backed Covax effort aimed at distributing vaccines to poor countries. But the company has been plagued by production problems and millions of doses made at a troubled factory in Baltimore had to be thrown out.

The Johnson & Johnson vaccine has been considered critical by numerous health officials to ending the pandemic because it requires only one shot, but fears about the easier-to-spread delta coronavirus variant have prompted numerous governments to consider the use of booster shots for many approved vaccines.

Last week, experts at the FDA recommended people 65 and older get a third dose of the covid-19 vaccine made by Pfizer-BioNTech while Britain previously authorized booster shots for people 50 and over in addition to priority groups like health workers and those with underlying health conditions. Other countries including Israel, France and Germany have also begun offering third vaccine doses to some people.

The World Health Organization has urged rich countries to stop administering booster doses until at least the end of the year, saying vaccines should immediately be redirected to Africa, where fewer than 4% of the population is fully immunized. In a paper published last week in the journal Lancet, top scientists from the WHO and FDA argued that the average person doesn't need a booster shot and that the authorized vaccines to date provide strong protection against severe covid-19, hospitalization and death.