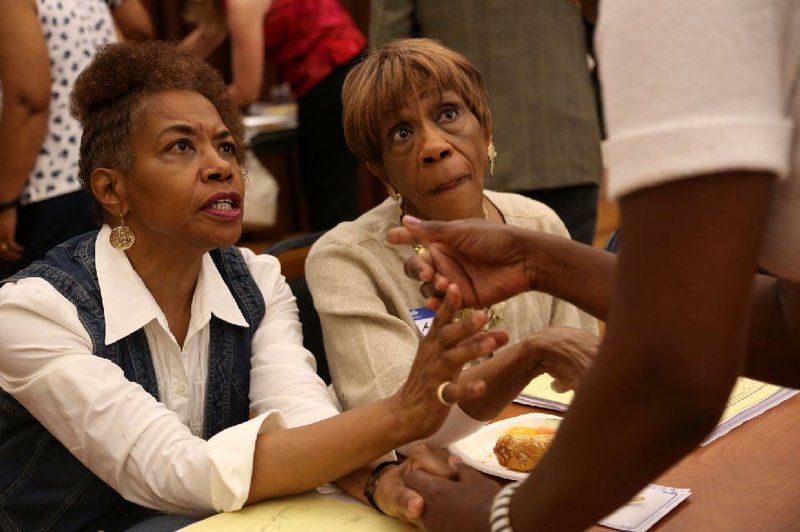 FILE — Loretta Hendrix, left, and and former City Director Erma Hendix, speak with concerned parent Debbie Priebe during a Truancy Summit, sponsored by The Coalition of Greater Little Rock Neighborhoods at the Hinton Resource Center in this June 8, 2013 file photo.

Loretta Hendrix, the daughter of the late Little Rock City Director Erma Hendrix, emailed members of the Little Rock Board of Directors on Monday to ask for their consideration for her to finish out her mother’s term in office.

Board members will have the opportunity to appoint someone to fill the remainder of Hendrix's term, which ends in January 2023. The individual they appoint will be able to run for a full term of their own in next year's election for the Ward 1 seat.

Erma Hendrix died Sept. 8 at age 91. She is survived by six adult children, according to her obituary.

In the email obtained by the Arkansas Democrat-Gazette, Loretta Hendrix wrote, "Director Hendrix worked diligently within the CLR [city of Little Rock] Ward I throughout many years and as her daughter I desire to fulfill Director Hendrix’s term in office having worked with Director Hendrix in continual representation of Ward 1 and in meeting the needs of the people of Ward 1."

She added, "Respectfully, I am seeking CLR Board of Director’s support regarding this matter and unified vote."

She did not immediately respond to a request for comment via email.

It is unclear when the city board will act to replace Hendrix. City officials will meet Tuesday evening for a routine board meeting.