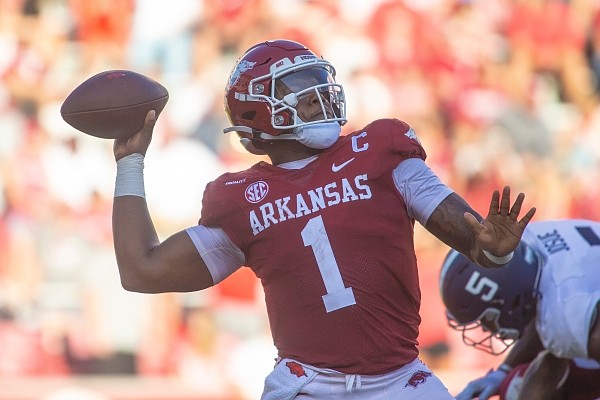 An Arkansas Razorback football team is 3-0 for the first time since 2016.

A Razorback football team is ranked for the first time since 2016 (No. 16 in this week’s Associated Press poll).

A Razorback football team has gained more than 600 yards in a game for the first time since 2016.

We’ll find out Saturday afternoon in Arlington, Texas, as the Hogs take on a Texas A&M team that has won 11 consecutive games. The contest will be nationally televised by CBS. It’s without a doubt the most high-profile game this week in the Southeastern Conference.

In the 45-10 victory over Georgia Southern last Saturday afternoon in Fayetteville, the Hogs gained 633 yards of offense and allowed only 233. KJ Jefferson passed for 366 yards and three touchdowns.

There were three Arkansas scoring drives of more than 90 yards. The 633 yards of offense were the eighth most in the history of Razorback football.

We’ll know a lot more about this Arkansas team following the next few games — A&M this week, No. 2 Georgia the following week and Ole Miss the week after that.

The record on picks was a perfect 6-0 last week, making the season record 21-3. This week’s schedule presents some real challenges when it comes to prognostications.

Texas A&M 34, Arkansas 30 — Like Arkansas, Texas A&M is 3-0 for the first time since 2016. The Aggies beat New Mexico by a final score of 34-0 Saturday. A&M is No. 7 in this week’s AP poll. Tom VanHaaren writes for ESPN: “The Aggies stumbled against Colorado in their second game, down late in the fourth quarter, but eventually scored the go-ahead touchdown for the 10-7 win. The team bounced back convincingly against New Mexico. Texas A&M needed a strong win before taking on an Arkansas team that beat Texas 40-21 in Week 2. That game will start a tough stretch of conference games with Alabama two weeks later, so any bit of confidence will help. The Aggies are trying to push forward to another level, and these next few games will gauge where they currently stand.” The Razorbacks believe in themselves after thrashing Texas. Expect them to hang around until late in Saturday’s game.

Tulsa 28, Arkansas State 26 — It was an ugly night in Seattle as the Red Wolves fell 52-3 to a Washington team that came in 0-2. The Huskies had 598 yards of offense as ASU failed to score a touchdown. Red Wolf quarterback James Blackman was just 16 of 38 passing for 176 yards. Saturday’s game will match two teams that are struggling. ASU is 1-2. Tulsa is 0-3 following losses of 19-17 to UC-Davis, 28-23 to Oklahoma State and 41-20 to Ohio State. The slight edge goes to the home team.

Sam Houston 27, UCA 19 — Sam Houston won the spring version of the FCS national championship (UCA chose to play an abbreviated schedule in the fall of 2020) and is off to a 2-0 start this season with victories of 42-16 over Northern Arizona and 52-14 over Southeast Missouri. UCA is 1-2 following Saturday’s 45-23 victory over UAPB. UCA outgained the Golden Lions 456-308. The Bears jumped to a 21-0 lead and led 28-9 at halftime. It will be interesting to see if UCA can stay close to Sam Houston on Saturday afternoon in Conway.

Alcorn 14, UAPB 12 — The Golden Lions started the season with a victory over Lane, had an open date and then fell in Conway on Saturday. SWAC play begins this week against a talented Alcorn team that lost its opener 23-14 to North Carolina Central in a nationally televised game, beat Northwestern State of Louisiana 13-10 and then fell 28-21 at South Alabama on Saturday. This is a Thursday night game in Pine Bluff.

Ouachita 18, Harding 17 — This is usually one of the games of the year in NCAA Division II, a contest that almost always comes down to the final minute of play. Ouachita hasn’t lost a regular-season game since 2017 when it dropped its homecoming contest to Harding. The Tigers won their 30th consecutive GAC game last Saturday with a 38-24 victory over winless Arkansas Tech. T.J. Cole had 124 yards rushing and two touchdowns for the Tigers. Kendel Givens, a freshman from Little Rock Christian, had 90 yards rushing and three touchdowns. Givens now has nine rushing touchdowns in just three games as a college athlete. Harding, meanwhile, bounced back from its shocking loss a week earlier at Southeastern Oklahoma to destroy Southern Arkansas in Magnolia by a score of 37-6. The Bisons’ run-oriented offense held the ball for 14:08 of the first quarter and jumped to a 17-0 lead. Harding finished with 442 yards rushing on 73 carries and kept the ball for 42:03 of the game’s 60 minutes. Saturday’s battle in Searcy should be a fun game but also a fast game since neither team likes to throw the football. Ouachita is ranked No. 8 nationally this week in the American Football Coaches Association NCAA Division II poll, and Harding is receiving votes.

Henderson 33, Southern Arkansas 21 — The 3-0 Reddies are up to No. 18 nationally in the AFCA poll. Henderson appears to be getting stronger each week. The Reddies went to Monticello last Saturday and beat UAM by 40 points, 58-18. Reddie quarterback Adam Morse was 26 of 31 passing for 398 yards and four touchdowns. The Reddies outgained the Boll Weevils 607-354. SAU, which won its first two games before being humbled by Harding, should present more of a challenge for Henderson than UAM.