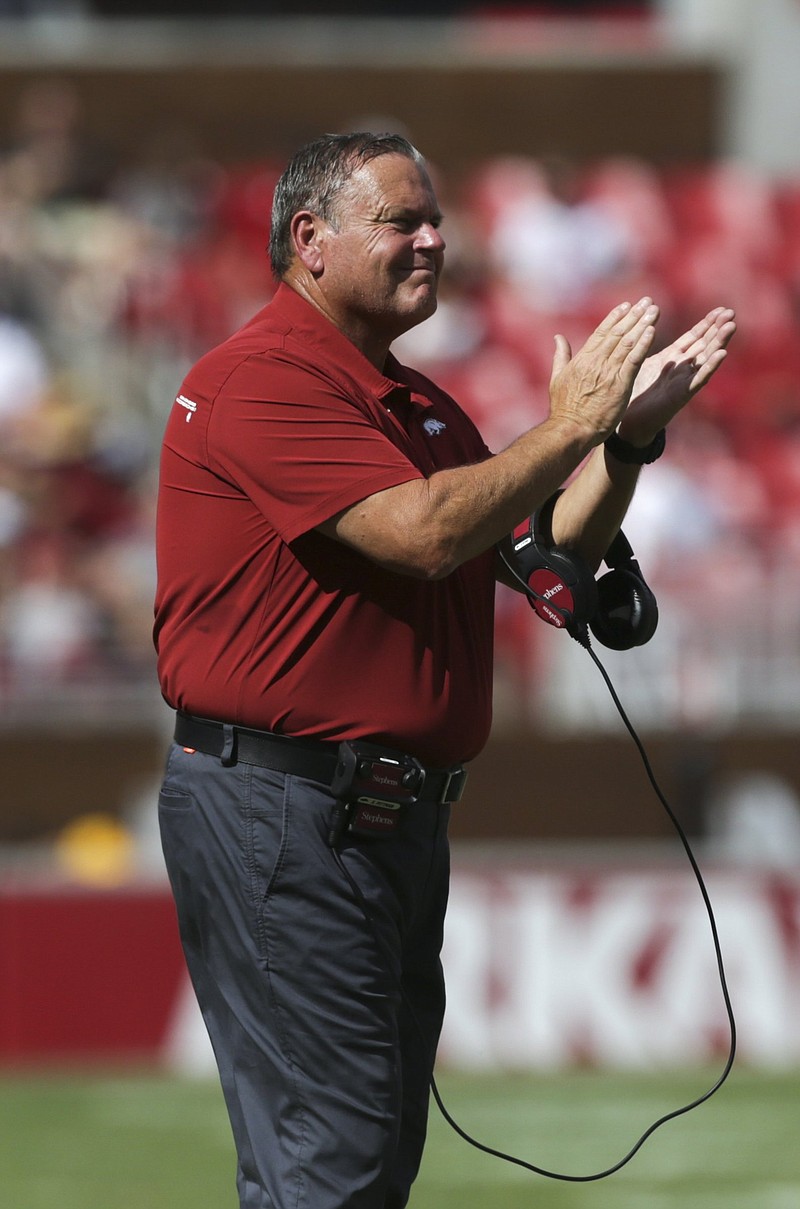 FAYETTEVILLE -- Breaking a lengthy losing streak against Texas A&M will not come easy for the University of Arkansas, Coach Sam Pittman warned Monday.

The stage is set for CBS' SEC game of the week at 2:30 p.m. Saturday with the resurgent Razorbacks (3-0) meeting their former Southwest Conference rival Aggies (3-0) in an SEC opener for both teams at AT&T Stadium in Arlington, Texas.

Arkansas will try to break a nine-game losing streak in the series with both teams coming in ranked for the first time since 2016 -- the Razorbacks are ranked No. 16 and the Aggies are No. 7.

The Razorbacks held a 41-24-3 edge over the Aggies in head-to-head meetings before Texas A&M launched its current streak.

"I think we'll talk about the rivalry hasn't been a rivalry for the last nine years," Pittman said, regarding how he would address the streak to his players. "You have to win for it to become a rivalry a little bit more."

The Razorbacks' last win in the series came in their final game as nonconference opponents in 2011. Quarterback Tyler Wilson passed for a school-record 510 yards and Jarius Wright caught a then-record 13 passes for 281 yards and 2 touchdowns as Arkansas rallied from a 35-17 halftime deficit for a 42-38 win at AT&T Stadium.

Arkansas' struggles since then have been numerous. The 2011 comeback under Coach Bobby Petrino was four head coaches (plus two interim coaches) ago for the Razorbacks.

The Aggies built into a solid contender in the SEC West under Kevin Sumlin, and fourth-year Coach Jimbo Fisher took it up a notch with a 9-1 record and a No. 4 ranking in the final Associated Press poll last season. The Aggies were the first team left out of the College Football Playoff, with Notre Dame edging A&M for the spot before being beaten 31-14 by eventual national champion Alabama in the Cotton Bowl at AT&T Stadium.

The Aggies have played keep-away with that trophy the past nine years.

"It's going to be hard to go get the trophy now, I'm telling you," Pittman said. "They've got a heck of a [team], ranked sixth or seventh. ... But we'll do our best to get prepared and go down there and see what happens."

Fourth-year Texas A&M Coach Jimbo Fisher was asked if this was the toughest Arkansas team the Aggies have faced during his tenure.

Both teams have some star players ailing. The Razorbacks' injuries centered more on the offensive line and the Aggies' issues are more at skill spots.

Center Ricky Stromberg and right tackle Dalton Wagner, who both came out of last week's 45-10 rout of Georgia Southern, did not practice Monday and are questionable for Saturday's game.

The Aggies had multi-purpose back Ainais Smith and tailback Devon Achane leave last week's 34-0 win over New Mexico, though Fisher said he thinks those two will be OK.

Additionally, Aggies offensive linemen Layden Robinson and Luke Matthews are expected to be better positioned to face the Razorbacks. Robinson, a 6-4, 320-pounder, is the starter at right guard, and Matthews, son of NFL great Bruce Matthews, is the starting center.

Defensive back Keldrick Carper is day to day this week, Fisher added. None of their injuries was disclosed.

Pittman was asked what he thought of returning to AT&T Stadium to face Texas A&M after the Aggies hosted the rivalry last year in College Station, Texas, due to coronavirus concerns that prevented SEC teams playing away from their campuses. The Razorbacks and Aggies are contractually bound to play in AT&T Stadium through the 2025 season.

Pittman said his preference is to play home games at Reynolds Razorback Stadium, which echoes the thoughts of Arkansas Athletic Director Hunter Yurachek.

"I don't feel great about it, to be honest with you," Pittman said. "I get the situation. I understand last year, but going over there then going neutral ..."

Pittman pointed out the Hogs' tough upcoming stretch that includes a neural site game against the No. 7 Aggies, road games at No. 2 Georgia and No. 13 Ole Miss, followed by a home game against Auburn and a home game in Little Rock against Arkansas-Pine Bluff.

"If you were to look at our situation over the next five games, we have three home games and we play in this stadium once," Pittman said. "I believe that if we're in this stadium that we're hard to beat because of our fans.

"Listen, everybody will think, 'Oh, Coach is throwing out excuses.' No, I'm not. We haven't even played the game yet. I feel very confident we can go in and play well at the Dallas Cowboys' stadium. I do. But would I rather have them in here? Yes."

Speaking at a luncheon last week, Arkansas Athletic Director Hunter Yurachek told WholeHogSports.com he expected the series with A&M to return to the campuses.

"If the schedule holds, the first time that will be back on campus for us will be a home game in 2025," Yurachek said. "We've invested significant dollars in Razorback Stadium and we want to play as many home games there because we feel it gives our team an advantage, especially in the SEC. I think you'll see other schools in our league follow suit."