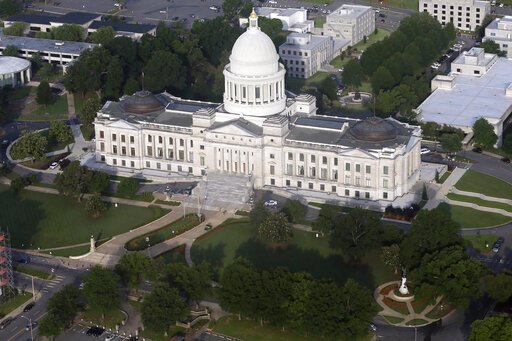 Arkansas lawmakers had an eye on keeping agriculturally similar counties in southeast Arkansas together when they discussed three congressional redistricting proposals on Monday.

The Arkansas General Assembly is set to be called into extended regular session starting Sept. 29 to consider legislation to redraw the boundaries of the state's four congressional districts based on data from the 2020 U.S. census.

More proposals are expected to be filed, and the chairmen of the House and Senate State Agencies and Governmental Affairs Committees said lawmakers were early in the process.

House committee Chairman Dwight Tosh, R-Jonesboro, said it was too soon to say if there was a consensus among lawmakers in support of any redistricting proposal.

It also proposes moving a portion of Jefferson County from the 4th District to the 1st District. The 1st District would also gain Boone and Marion counties, which are now in the 3rd District, under the legislation.

Sarah Dunklin, a farmer and the 1st Congressional District chairwoman of the Republican Party of Arkansas, said she appreciated those changes along with keeping Lincoln County in that district because many people there are row crop farmers, like many in the 1st District, but so are many in Drew and Ashley counties.

"We definitely want to keep our row crop farmers together," she said, noting that it is beneficial for states with similar economies to be in the same congressional district.

U.S. Rep. Rick Crawford, R-Ark., who represents the 1st District, is on the House committees on agriculture and intelligence, she added.

"Our row crop farmers in Arkansas, we feed the world, and I think when it comes to drawing these maps sometimes we forget that," she said.

Laurie Black, the incoming chairwoman of the Chicot County Republican Party, echoed that it was important to keep row crop farmers together and said she would like for the 1st Congressional District to get Lincoln and Jefferson counties, indicating that people in that part of the state had less in common with the people in Marion and Boone counties.

House Bill 1960, by Rep. Jack Ladyman, R-Jonesboro, would shift Pope County and a portion of Jefferson County to the 4th Congressional District. It also proposes moving Marion and Newton counties to the 1st District, along with the northernmost portion of White County.

House Bill 1961, by Rep. David Whitaker, D-Fayetteville, proposes moving Arkansas, Lincoln, Desha and Pope counties to the 4th Congressional District, but Whitaker said he had made that map before hearing from people from southeast Arkansas. He said he would work on another version that accounts for the row crop farmers in those counties.

Whitaker said his goal was to make the districts more cohesive and to get rid of the horseshoe shape of the 3rd Congressional District by adding Madison County and moving Newton, Boone and Marion counties to the 1st District.

Other lawmakers said they supported putting Madison County in the 3rd Congressional District, but the deviation between the ideal population for a congressional district -- 752,881 people -- and what the population would be if the lines were redrawn per Whitaker's proposal was too high, at 1.33%.

The committees are scheduled to meet again at 1 p.m. Thursday and will discuss redistricting bills filed Monday, Tuesday and Wednesday, Tosh said.