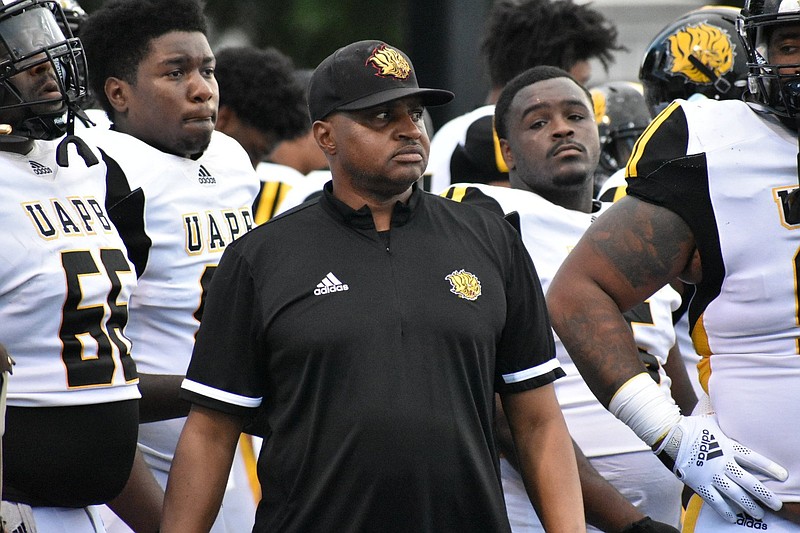 Junior punter Josh Sanchez was named the conference's Specialist of the Week after pinning UCA within its 20-yard line on two occasions. Sanchez, 6-foot-2 and 210 pounds from Corning, Calif., punted five times for 214 yards (42.8 average), with two of them going for 50 or more yards.

"Josh is a player," UAPB Coach Doc Gamble said during Monday's SWAC coaches' Zoom meeting. "If he's winning SWAC Player of the Week, that tells you something. We're going to have to do a better job of keeping him on the sideline. He has a big leg. We told him going in, we wanted him to flip the field, and he used the big field to move the football. He held up his end of the bargain with that."

Sanchez also reached a season-high 61-yard punt Saturday. He is averaging 40.8 yards per punt through two games, topping his 38.96 average from the five spring games. His career long is 67 yards against Southern University on March 6.

Coming out of the delay with 4:38 remaining before halftime, UAPB (1-1) began an eight-play, 53-yard scoring series to pull within 21-9. UCA then took only four plays to move 47 yards following a 31-yard Corbin Humphrey kick return within a minute of game time to expand the lead to 28-9, the score at halftime.

"I had some choice words to say because of the way we played coming out, and they responded well," Gamble said shortly after the game. "But we've got a ways to go with our physicality and minimizing missed assignments. We've got a ways to go, but we'll get there.

"We've got to come in and watch this film and learn from it."

In preparing for Thursday's home game against Alcorn State University (6:30 p.m. on ESPNU), Gamble has compressed this game week by holding practice after a video session Sunday and running their usual Tuesday and Wednesday practice flow on Monday.

BACK ON 'THE STRIPES'

UAPB graduate student Kierre Crossley, who finished with 82 yards and two touchdowns on seven carries, said it was a "crazy feeling" returning to "The Stripes," where he had spent the past four years after redshirting in 2016.

"Coming into it, I didn't know what to expect," Crossley said. "I just knew it was going to be crazy. It kind of felt weird at first, but I'm used to playing on this field. Being on the other side was a little different, but I soaked it all in and went with it."

Crossley rushed for his first touchdown from 7 yards out on the drive following the weather delay. With UAPB trailing 31-9 and 5:24 left in the third quarter, Crossley sparked the Golden Lions' comeback effort with a 2-yard touchdown run.

That was followed by freshman Andre Fuller's 49-yard interception return for a touchdown.

"Just keep the momentum," Crossley said he told the Lions after his second touchdown. "I know when we execute, we can make big stuff happen. We started off the game slow. We never really got a true chance to get stuff rolling, but once we got that momentum rolling, it started for us."

The sellout crowd at UCA's First Security Field at Estes Stadium -- not counting a visible contingent of UAPB fans and their band -- made for what Lions quarterback Skyler Perry called a hostile environment. It was the first time since 2008 the two programs, who were rivals in the old Arkansas Intercollegiate Conference in the 1970s and 1980s, played each other.

Perry said the Lions proved they were "a tough-caliber team" when digging from an earlier 22-point hole to pull within 31-23.

"When we get that momentum, we have to keep it and put guys away, and that's what we didn't do tonight," the fourth-year starter said. "So, we're going to bounce back and get ready for Thursday."

Perry struggled to a 13-for-32 evening with an interception. As a team, UAPB held the ball for only 22 minutes, 22 seconds -- 96 seconds of which came in the first quarter.

"At the quarterback position, you're the glue guy," Perry said. "If you settle down, your team will follow. That's what I always want to do, in practice or in a hostile situation."

In a week where the team had to cancel two practices without a training staff, Alcorn State (1-2) overcame that adversity just to play the University of South Alabama in Mobile and nearly stunned the Jaguars of the Sun Belt Conference.

Alcorn State also weathered about a 90-minute delay due a lighting malfunction at Hancock-Whitney Stadium, according to Al.com, but still raced to a 14-7 halftime lead, only to lose to the Jaguars 28-21.

"A winnable game, I thought," Braves Coach Fred McNair said. "The kids know the game could have easily been the other way. ... My hat's off to these young men for the way they stood up and fought adversity, I could say. This coaching staff, I can't say enough about them for the way they prepared this team through the course of the week. It was outstanding for us to put on a game the way we did. The way the young men played, there's not enough to say about the way they fought in their performance against South Alabama."

In a statement to a Mississippi television station, Alcorn State Athletic Director Derek Horne the Braves had to adjust their practice schedule due to covid-19, but did not mention the lack of trainer availability. It's been reported covid-19 impacted the trainers, who work as contractors rather than full-time hires.

McNair confirmed Monday that the Braves have a trainer available for this week.

"This is a very important position to have in your department," McNair said.

Felix Harper, the 2019 SWAC Offensive Player of the Year, completed 20 of 33 passes for 265 yards and a touchdown with an interception.

Braves players opted out of the spring 2021 season, a makeup of the fall 2020 slate that was called off due to the coronavirus pandemic.

Former UAPB quarterback Shannon Patrick completed 17 of 31 passes for 221 yards and a touchdown with an interception in Bethune-Cookman's 30-27 loss to Alabama A&M. 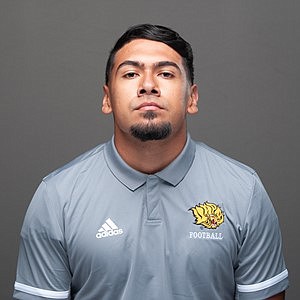