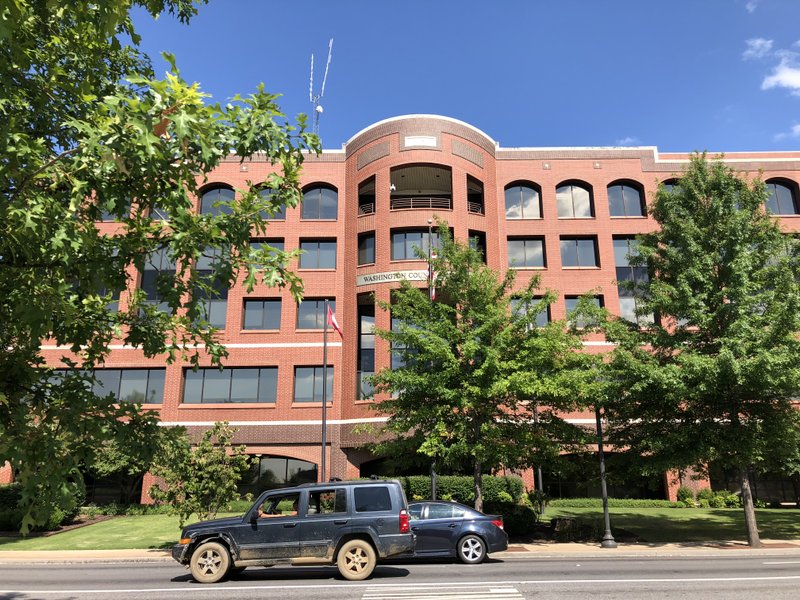 The Washington County Courthouse is seen in Fayetteville in this file photo. (File photo/NWA Democrat-Gazette/STACY RYBURN)

SPRINGDALE -- Health care, housing and education were among the areas of need identified by area residents Monday night as they sought to highlight ways Washington County can use $46 million in federal American Rescue Plan Act funds.

About 45 people attended the event, billed as a "community cookout conversation" and sponsored by the Arkansas Justice Reform Coalition. Members of the group have been asking county officials to have an open public discussion of how the county may use the money it is receiving through the American Rescue Plan Act. Washington County justices of the peace and other county officials were invited, but none attended Monday's gathering.

The group met in Fayetteville on Sept. 8 and has another meeting set for Sept. 29 in Elkins. Other meetings are planned for Farmington, Lincoln and West Fork.

Sarah Moore of Fayetteville, one of the organizers of the meetings, told the group the Washington County Quorum Court has indicated support for a multimillion-dollar expansion of the Washington County Detention Center as one possible use for the funds. She said the aim of the meetings is to generate other ideas and to persuade county officials to pause spending decisions on the money until a robust public discussion of other possible uses for the money can be had.

The American Rescue Plan provides $350 billion in federal money for eligible state, local, territorial and tribal governments nationwide, according to information from the Treasury Department.

Washington County has received $23 million this year under the plan and expects to receive another $23 million next year.

Benton County will receive a total of $54 million -- $27 million per year over the next two years.

Larry Froelich, a Fayetteville attorney, told the group at-risk children have special needs and the pandemic has made those needs more urgent. He said studies have shown that theater and the arts are among the best ways of helping children deal with the kinds of emotional stress they are experiencing, watching family members fall ill or die from covid, having their schooling interrupted and their normal lives upended. He said the money could be used for programs to provide that kind of support and others.

Froelich said people in the community have to organize and make themselves heard if the money that is available is to be used for the people.

"Don't look to politicians for leadership; they're not leaders," he said. "If you want to influence them, you've got to push them. Put the squeeze on them because that's the way you get anything done."

Other participants spoke of needs including support for those with mental health or substance abuse issues, food and housing needs. Others said it's important to seek out the needs of people in the area who have traditionally been under-served and underrepresented, including Black, Hispanic and Marshallese residents.

Albious Latior of Springdale said the Marshallese community has been largely unheard in any conversation about how the money might be used, even though there are great needs among local Marshallese residents.

Latior said he knew personally of more than 200 Marshallese families who have been evicted from their homes during the pandemic. He said many worked in the poultry industry and missed work because of covid or the need to quarantine after being exposed to covid. He said some had found new apartments, others are living in hotels and many are sharing space with other family members.

The Rescue Plan will provide needed relief to governments to enable them to continue to support the public health response and lay the foundation for a strong and equitable economic recovery. In addition to helping these governments address the revenue losses they have experienced as a result of the crisis, it will help them cover the costs incurred due to responding to the public health emergency and provide support for a recovery — including through assistance to households, small businesses and nonprofits, aid to impacted industries, and support for essential workers. It will also provide resources for governments to invest in infrastructure, including water, sewer and broadband services.

Source: U.S. Department of the Treasury