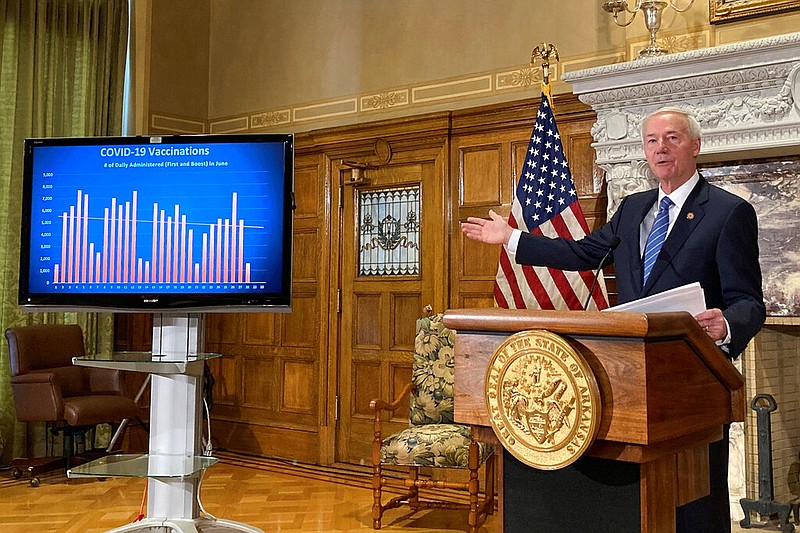 Arkansas' downward trend in new coronavirus cases continued Tuesday as the number of people hospitalized in the state with the virus dipped back below 1,000, reaching its lowest level since July.

The state's count of cases rose by 1,401 - the seventh daily increase in a row that was smaller than the one a week earlier.

Arkansas' death toll from the virus, as tracked by the Department of Health, rose by 17, to 7,499.

At his weekly news conference at the state Capitol, Gov. Asa Hutchinson noted that the pace of vaccinations has declined along with the state's daily case increases.

"Concern is not the right word, but I hope that we can keep the focus on the vaccines," Hutchinson said.

He called the shots "the best assurance" that the state can keep cases from surging back up again.

Hutchinson also said Arkansas has ample supplies of monoclonal antibodies, which are used to treat people at high risk of complications from covid-19.

All but nine of the state's 75 counties have at least one provider offering the treatment, according to a Health Department map he displayed.

After rising a day earlier, the number of people hospitalized in the state with covid-19 fell Tuesday by 34, to 993, its lowest level since July 26.

The number of the state's virus patients who were on ventilators fell by 11, to 278, its lowest level since Aug. 8 but still higher by 10 than its peak in January during the state's winter surge.

The number who were in intensive care fell by one, to 439.

With recoveries and deaths outpacing new cases, the number of cases in the state that were considered active fell by 779, to 14,225. It was the first time the number had been below 15,000 since July 26.

Meanwhile, at 7,228, the increase in vaccine doses that providers reported having administered, including second and third doses of the Pfizer and Moderna vaccines, was larger by 457 than the one the previous Tuesday.

It was the first daily increase in seven days that was larger than the one a week earlier.

After reaching a two-month low a day earlier, the average number of doses administered each day over a rolling seven-day period rose to 6,209.

Hutchinson will discuss ways to encourage Arkansans to get vaccinated against covid-19, as well as other "topics of the day," according to a news release by the governor's office.

[Video not showing up above? Click here to view » https://www.youtube.com/watch?v=7artxW0bN_w]