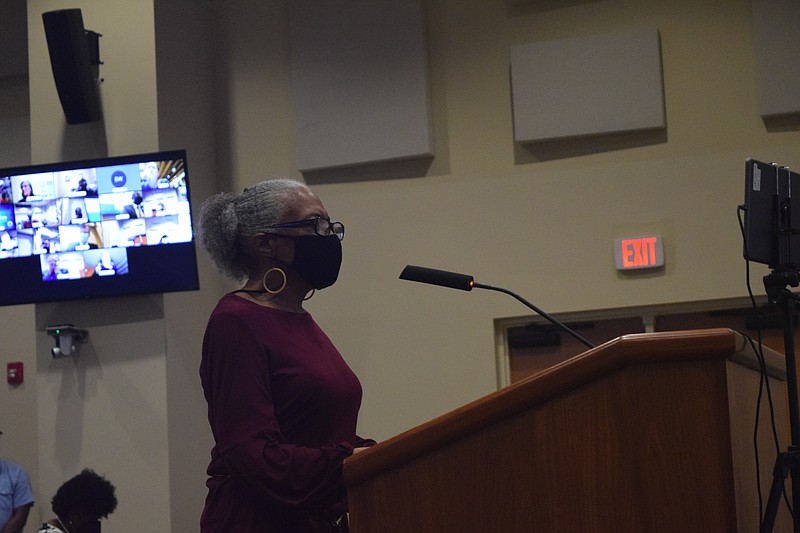 Loretta Hendrix, the daughter of the late Little Rock City Director Erma Hendrix, addresses members of the Little Rock Board of Directors at a Tuesday, Sept. 21, 2021 meeting. (Arkansas Democrat-Gazette/Joseph Flaherty)

Loretta Hendrix, the daughter of the late Little Rock City Director Erma Hendrix, is seeking the appointment of the Little Rock Board of Directors to finish out her mother's term in office.

Hendrix in an email on Monday privately asked board members for their support. She later urged elected city directors to appoint her to the vacant Ward 1 seat in declarative remarks to the board at its meeting Tuesday evening.

"Not only am I qualified to represent the citizens of Ward 1, I deserve the seat because my family and I campaigned vigorously for the 2018 re-election of Erma Fingers Hendrix, Ward 1," she said at the podium.

Board members will have the opportunity to appoint someone to fill the remainder of Erma Hendrix's term, which ends in January 2023.

The individual they appoint will be able to run for a full term of their own in next year's election for the Ward 1 seat.

At Tuesday's meeting, prior to Loretta Hendrix's remarks, which she made during the public comment period, Mayor Frank Scott Jr. gave details on how the Ward 1 vacancy would be filled. He said the city would accept applications from individuals interested in the seat for a period beginning Thursday and running through Sept. 30.

City directors will review applications beginning Oct. 1 and discuss applicants and rank the top seven on Oct. 5. Finally, they will hear from the top applicants and vote publicly on a candidate to fill the seat Oct. 12 following a closed-door discussion of the interviews, according to Scott.

An appointee can expect to have a significant leg up over what could be a crowded field of candidates in 2022 should he or she choose to run for a full term. As the Ward 1 incumbent in 2018, Hendrix drew eight challengers.

The ward's boundaries encompass Little Rock's downtown core, a series of communities south of Interstate 630 and much of the area surrounding the airport.

Erma Hendrix died Sept. 8 at age 91. She is survived by six adult children, including Loretta, according to her obituary.

In the email to board members obtained by the Arkansas Democrat-Gazette, Loretta Hendrix wrote, "Director Hendrix worked diligently within the CLR [city of Little Rock] Ward I throughout many years and as her daughter I desire to fulfill Director Hendrix's term in office having worked with Director Hendrix in continual representation of Ward 1 and in meeting the needs of the people of Ward 1."

She added, "Respectfully, I am seeking CLR Board of Director's [sic] support regarding this matter and unified vote."

She is a real-estate broker with the firm Double Diamond Associates Real Estate, Hendrix said. Additionally, she said she serves as the managing director of a nonprofit called IRDMatrix and works as a lobbyist in a firm called L.J.H. Series, Strategies and Policy.

IRDMatrix works in the field of historic preservation and rehabilitation, according to its website, and seeks to support veterans and women with on-the-job training.

IRS tax filings associated with Hendrix's nonprofit, which is registered with the agency under the name Innovation R&D, were not immediately available from the website GuideStar.

If appointed to the board, her priorities would include innovation-driven job creation in order to spur job growth outside of City Hall positions, as well as supporting investment in children, Hendrix said.

She said there needs to be "a re-imagining of what it is that we want to do -- five-year goals, 10-year goals -- for the city of Little Rock, with children at the center of that because they are our growth, they are our future. You've got to invest in them."

Asked about her thoughts on Scott's recent sales-tax proposal, which failed in a Sept. 14 citywide referendum, Hendrix said she voted against the tax increase despite her record of supporting other progressive initiatives in Little Rock.

She argued that "it was the wrong time for it."

Hendrix suggested Scott instead could have indicated he would pursue the tax increase during a second term as mayor and in the meantime keep the focus on covid-19 amid recent federal stimulus spending.

With regard to the board's various personalities and the divisions that sometimes show in the government body's discussions, Hendrix said she possesses a "working personality." She indicated she has had contact with all of the board members.

The one exception was at-large City Director Dean Kumpuris, she said, in spite of the fact they both graduated in 1966 from what was then known as Hall High School.

"I don't have an issue with any of them," she said.

Hendrix volunteered that among the board's white members, she has conversed the most with at-large City Director Joan Adcock.

When asked if she would run for a full term of her own in the 2022 election should she get appointed to the city board, Hendrix said, "I don't know that yet," and referred to her present focus on her nonprofit work involving veterans.

She said she previously served on the city's Historic District Commission under then-Mayor Mark Stodola.

Erma Hendrix represented Ward 1 on the city board for more than a decade. After serving from November 1993 to December 1994, a longer stretch on the board followed when Hendrix was elected to the Ward 1 seat again in 2006. She was re-elected three more times, most recently in 2018.

Hendrix was known as an outspoken board member during her tenure.

Notably, she strongly favored a system of ward representation over Little Rock's current government structure where seven representatives, each hailing from a different ward, serve on the city board along with three at-large representatives elected by the city's entire pool of voters.

Hendrix appointed her daughter to a study group that reviewed Little Rock's government structure for a period of several months in 2019, though the city director criticized the committee's process in February 2020, calling it "a waste of time," the Democrat-Gazette reported last year.