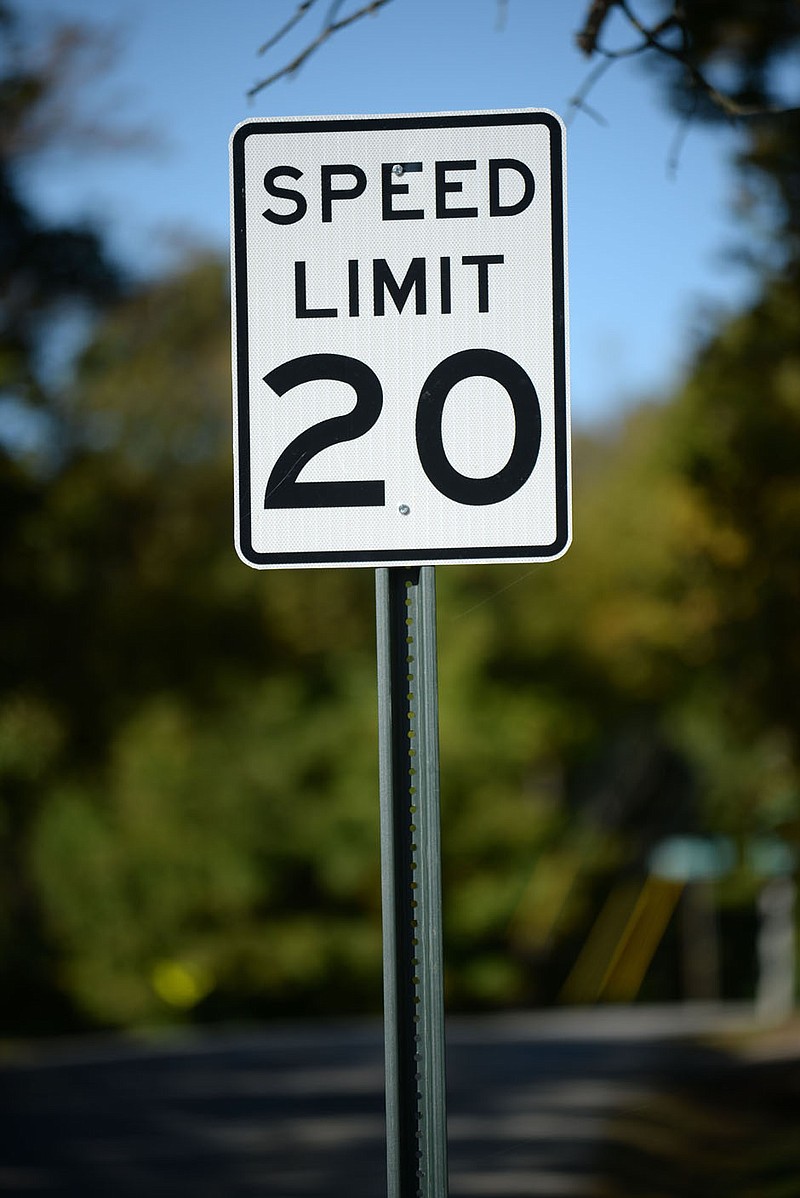 A 20-mph sign stands Oct. 17, 2019, along Prospect Street north of Wilson Park in Fayetteville. The City Council on Tuesday took up setting the default speed limit on neighborhood streets with no sign posted to 20 mph from 25 mph. (File photo/NWA Democrat-Gazette/Andy Shupe)

FAYETTEVILLE -- The City Council chose to take it slow Tuesday regarding a decision to reduce the default speed limit for residential streets without a sign.

The proposal before the council would set the speed limit for residential streets without a speed-limit sign to 20 mph from the current default of 25 mph. The move would match the 20 mph default speed limit for a street in a business district without a sign, such as Dickson Street and the downtown square.

If passed, streets without a speed limit sign would default to 20 mph. Signs on residential streets that say 25 mph would need to be replaced or removed to be lowered to 20 mph, Public Works Director Chris Brown said. The city has about 1,200 to 1,500 25-mph signs, so replacing all of them would cost about $25,000 over time, he said.

The council's Transportation Committee supported lowering the default speed limit more than a year ago and again this year. In 2019, the city had a pilot program on streets near Wilson Park. Signs indicating 20 mph were placed on West Prospect and East Trenton streets.

Council Member Teresa Turk said most complaints she gets from residents are about drivers speeding through neighborhoods. She asked the council to hold off on making a decision to provide more time for residents to weigh in. No one from the public spoke on the topic Tuesday.

"I just want to make sure they have a chance to state their opinion," Turk said.

A motion to go to the second reading failed by not gaining enough votes. The council will take up the measure again Oct. 5.

About an hour into the meeting, police escorted James William Smith from the council chambers. Smith was speaking at the podium during a rezoning request for property on Huntsville Road but did not speak about the rezoning.

Smith was arrested for criminal trespassing during a Sept. 8 council meeting after refusing to wear a mask. He referenced the arrest while at the podium Tuesday and continued to speak after Mayor Lioneld Jordan repeatedly asked him to stop. Jordan reads the rules about speaking during council meetings before each item, which includes staying on the topic being discussed.

Smith said the arrest violated his liberty, demanded the city repeal its mask ordinance and said he would file a federal lawsuit against the city. An officer led him out of the chamber after about two minutes, and about 10 other people also left, protesting for him to be allowed to speak. They wore masks while in City Hall.

• Annexing about 10 acres near North 54th Street into the city limits.

• Rezoning about 2 acres on Huntsville Road north of Curtis Avenue from residential single-family up to four units an acre to a denser residential zone.