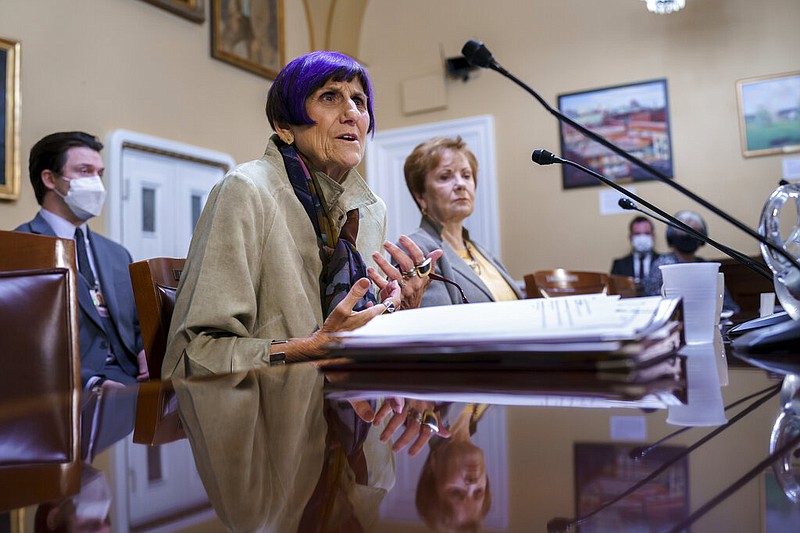 House Appropriations Committee Chair Rosa DeLauro, D-Conn., left, joined by Rep. Kay Granger, R-Texas, the ranking member of Appropriations, appear before the House Rules Committee as they field questions about the politics of the federal debt, at the Capitol in Washington, Tuesday, Sept. 21, 2021. (AP/J. Scott Applewhite)

WASHINGTON -- The House voted Tuesday night to fund the government into early December, suspend the federal debt limit, and provide disaster and refugee aid, setting up a high-stakes showdown with Republicans who oppose the package despite the prospect of a fiscal crisis.

The Democratic-led House passed the measure by a vote of 220-211, strictly along party lines. The bill now goes to the Senate, where it is likely to falter because of overwhelming GOP opposition.

If funding stops, the federal government faces a shutdown at midnight Sept. 30, the end of the fiscal year. Additionally, at some point in October, the U.S. risks defaulting on its debt load if its borrowing limits are not waived or adjusted.

America could plunge into an immediate recession if Congress fails to raise the debt ceiling, and the U.S. defaults on its payment obligations this fall, according to one analysis released Tuesday.

"Our country will suffer greatly if we do not act now to stave off this unnecessary and preventable crisis," House Majority Leader Steny Hoyer, D-Md., said shortly before the vote.

The package approved Tuesday would provide stopgap money to keep the government funded to Dec. 3 and extend borrowing authority through the end of 2022. It includes $28.6 billion in disaster relief for the aftermath of Hurricane Ida and other extreme weather events, and $6.3 billion to support Afghanistan evacuees in the fallout from the end of the 20-year war.

While suspending the debt ceiling allows the government to meet financial obligations already incurred, Republicans argued that it would also facilitate a spending binge in the months ahead.

"I will not support signing a blank check as this majority is advancing the most reckless expansion of government in generations," said Rep. Dan Meuser, R-Pa.

Backed by the White House, Democratic congressional leaders pushed ahead at a time of great uncertainty in Congress. Democrats are also trying to gather support for President Joe Biden's broad "build back better" agenda, with a price tag of up to $3.5 trillion over 10 years.

Senate Republican leader Mitch McConnell of Kentucky made a purely political argument for refusing to support raising the debt ceiling, saying the party in power should shoulder the task on its own.

"America must never default -- we never have, and we never will," McConnell said, speaking at his weekly news conference. "But whose obligation it is to do that changes from time to time, depending upon the government the American people have elected. Right now, we have a Democratic president, Democratic House, Democratic Senate."

Lawmakers and aides have conceded that it is likely possible for Democrats to address the debt ceiling on their own, using the same fast-track budget process they are employing to muscle through their $3.5 trillion social safety net plan over unified Republican opposition. That process, known as reconciliation, shields legislation from a filibuster.

But Democratic leaders have rejected that approach, which would be a time-consuming and tricky maneuver that could imperil their marquee domestic legislation, already at risk amid party infighting over its price tag and details.

"Both Senate and House leadership have decided that that's not an option they want to pursue," Rep. John Yarmuth, D-Ky., chairman of the Budget Committee, said Monday. "I want to raise it to a gazillion dollars and just be done with it."

Yarmuth blasted McConnell's position: "For him to say, 'The debt ceiling has to be done, but we're not going to do it' is to me just the most ludicrous statement I've ever heard from a public official."

Democrats have argued that Republicans should do their part to protect American credit and avoid a catastrophic default. Having joined with Republicans to raise the debt ceiling during the Trump administration, Democrats argue that the GOP is setting a double standard that threatens to sabotage the economy.

Senate Democrats are expected to take up the bill in the coming days, essentially daring Republicans to vote against it. In the 50-50 Senate, however, they will be hard-pressed to find 10 Republicans to reach the 60-vote threshold needed to overcome a filibuster.

The Treasury Department has been using "extraordinary measures" to fund the government since the last debt-limit suspension expired July 31, and it projects that at some point next month it will run out of cash reserves. Then it will have to rely on incoming receipts to pay its obligations, now at $28.4 trillion. That could force the Treasury to delay or miss payments.

In a report being circulated by Democrats, Zandi warns that a prolonged impasse over the debt ceiling would cost the U.S. economy up to 6 million jobs, wipe out as much as $15 trillion in household wealth, and send the unemployment rate surging to roughly 9% from around 5%.

"The downturn would be comparable to that suffered during the financial crisis" of 2008, said the report, written by Zandi and Bernard Yaros, assistant director and economist at Moody's.

"Stock prices would be cut almost in one-third at the worst of the sell-off, wiping out $15 trillion in household wealth," the Moody's report finds. The market would rebound once the impasse is resolved, but some amount of the losses would be permanent. "Treasury yields, mortgage rates, and other consumer and corporate borrowing rates spike, at least until the debt limit is resolved and Treasury payments resume."

"Brinkmanship around this whole process will be reflected in higher cost to taxpayers," Zandi said in an interview. "There is a cost to doing this in a way that is not at least somewhat bipartisan."

Once a routine matter, raising the debt ceiling has become a political weapon of choice for Republicans in Washington ever since the 2011 arrival of tea party lawmakers who refused to allow the increase. They argued against more spending, and the standoff triggered a fiscal crisis.

McConnell is echoing that strategy, but some GOP senators may have a tough time voting no.

Republican John Kennedy of Louisiana, whose state was battered by the hurricane and who is up for election next year, said he is likely to vote for the increase. "My people desperately need the help," he said.

White House press secretary Jen Psaki told reporters that "in our view, this should not be a controversial vote." She said Congress has raised the debt ceiling numerous times on a bipartisan basis, including three times under President Donald Trump.

Rep. Rosa DeLauro, D-Conn., the chairwoman of the House Appropriations Committee, was forced to introduce another version of the bill Tuesday after some in the Democratic caucus objected to the inclusion of $1 billion for Israel's Iron Dome defense system, which uses missiles to intercept short-range rockets fired into the country.

The Israel defense issue splits Democrats, but DeLauro assured colleagues that money for the weapons system would be included in the annual defense spending bill for the next fiscal year, which begins Oct. 1. Hoyer went a step further and said he would take a bill to the floor this week to replenish the Iron Dome system.

Republicans were highly critical of the change and vowed to stand as allies with Israel.

Meanwhile, behind the scenes, Democrats were negotiating among themselves over Biden's big package as the price tag likely slips to win over skeptical centrist lawmakers who view it as too much.

Publicly, the White House has remained confident that the legislation will pass soon, despite sharp differences among progressives and moderates in the party over the eventual size of the package and a companion $1 trillion bipartisan infrastructure bill.

There has been a flurry of outreach from the White House to Democrats on Capitol Hill, and Biden was given a call sheet of lawmakers to cajole, even though his week was dominated by foreign policy, including his speech to the United Nations General Assembly.

The president has been talking to a wide number of lawmakers beyond his recent meetings with Sens. Joe Manchin, D-W.Va., and Kyrsten Sinema, D-Ariz., two key centrist votes, according to a White House official familiar with the calls and granted anonymity to discuss them.

Biden's big initiative touches almost all aspects of Americans' lives. It would impose tax increases on corporations and wealthy Americans earning beyond $400,000 a year and plow that money back into federal programs for young and old. It would increase and expand government health, education and family support programs for households, children and senior citizens, and boost environmental infrastructure programs to fight climate change.

With Republicans opposed to Biden's vision, Democrats have no votes to spare in the Senate and just a few votes' margin in the House.

House Speaker Nancy Pelosi, D-Calif., has promised a Monday vote on the companion bill, the $1 trillion bipartisan infrastructure bill of public works projects that has widespread support from both parties in the Senate, though House Republicans mostly oppose it.

Even though that bill should be an easy legislative lift, it too faces a political obstacle course. Dozens of lawmakers in the Congressional Progressive Caucus are expected to vote against it if it comes ahead of the broader Biden package. And centrists won't vote for the broader package unless they are assured the bipartisan bill will be included.

Information for this article was contributed by Lisa Mascaro, Kevin Freking, Darlene Superville and Jonathan Lemire of The Associated Press; by Emily Cochrane of The New York Times; and by Jeff Stein of The Washington Post.