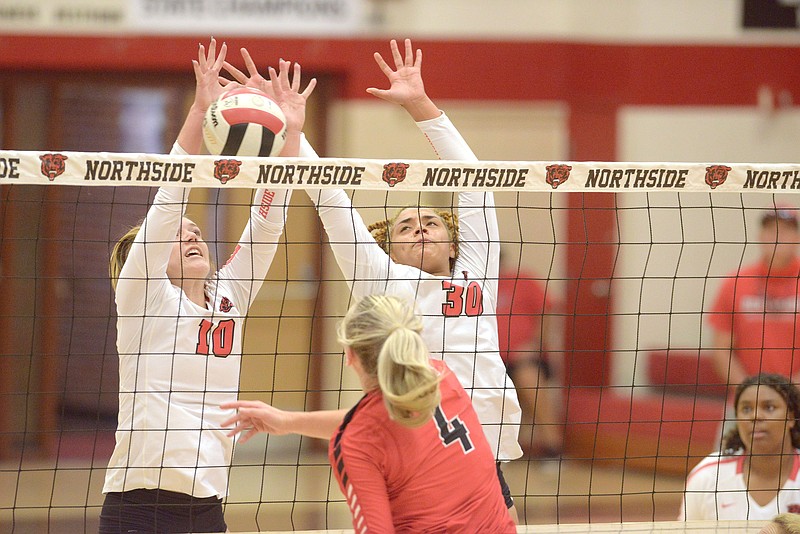 The Lady Bears (15-6, 4-2 6A-Central) used a big 7-0 run in the fourth set to turn an 18-17 deficit into a 24-18 advantage. Senior middle blocker Dynasty Andrews, who finished with nine total blocks, had a pair of kills, a solo block and team up with setter Maci Grams with another block to help her team take control.

Northside coach Matt Waack said the 6-0 Andrews was a force at the net throughout the match.

[Don't see the video above? Click here to watch: youtube.com/watch?v=0u__-Tz0bxQ]

I know they didn't all go down, but she was blocking, blocking and making their hitters change their angle," Waack said. "And that changed the game for us when she came alive."

Cabot (7-3, 4-2) surged back to within 24-21, but Northside finished the deal to pull out the win. The Lady Bears, Lady Panthers and Mount St. Mary are now all tied for second behind Conway.

Waack was pleased to see his team get back into a nice rhythm after struggling a bit the last couple of weeks missing junior right-side hitter Za'kari Gurule', who was sidelined with an ankle injury.

"Tonight was huge for us, not just because it's Cabot and they were ahead of us in the conference," Waack said. "But we needed to get back on track because we hit that slump after my right-side got hurt. We've been kinda barely chugging along.

"I was just glad to see their resiliency. It could have easily gone the other way. After game two, they dug in."

Northside came out on top in a see-saw affair. The Lady Bears saw a 20-10 lead disappear, but scored the final two points for the 26-24 win. But Cabot turned the tables in the second set with an 11-3 run to cruise to the second-set win.

But Northside won two back-and-forth sets to claim the match.

Gurule' and Sydney Klein hammered 11 kills each and chipped in 17 and 10 digs, respectively to register double-doubles. Alyssa Brown also added 10 kills. Grams also put up a double-double with 45 assist and 13 digs.

Waack believes his team can be better even though he liked what he saw against the Lady Panthers. But he loved the way all facets of the game stepped forward when needed.

"I still think we're only 70, 80 percent," Waack said. "But my outsides came alive late and that helped tremendously. My right side, she's still not 100 percent. She's a bit part of our game, which is why Cabot came out and keyed on her.

"I was glad to see my outside carry that load in games 3 and 4. We loaded up the outsides and I said 'Go make them stop that and if they finally are able to stop them, then we can go somewhere else.' That's what we've gotta be able to do."

Northside hosts Little Rock Southwest on Thursday to close the first round of league play.

The Lady Purple'Dogs host co-leader Springdale Har-Ber on Thursday to finish the first round of league play.