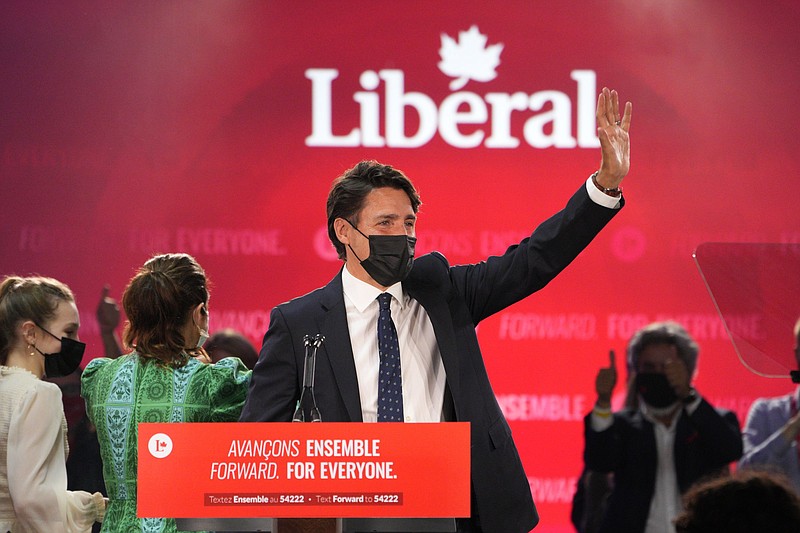 TORONTO -- Prime Minister Justin Trudeau secured victory in parliamentary elections but failed to get the majority he wanted, an outcome that threatened his Conservative rival with loss of his job after moving his party to the center and alienating its base.

[Video not showing up above? Click here to watch » https://www.youtube.com/watch?v=DEFcjfwQwko]

Trudeau bet Canadians didn't want a Conservative government during the pandemic and voiced the concerns of Canadians who are increasingly upset with those who refuse to get vaccinated.

That argument helped propel Trudeau to victory in the election Monday, and while the gamble to win a majority of seats in Parliament didn't pay off, Trudeau leads a strong minority government that won't be toppled by the opposition anytime soon.

The results nearly mirrored those of two years ago. The Liberal Party secured or was leading for 158 seats -- one more than it won in 2019, though 12 short of the 170 needed for a majority in the House of Commons.

Hours after the results came in, Trudeau greeted commuters and posed for photos Tuesday morning at a subway stop in his district in Montreal -- a postelection tradition for the prime minister.

"I hear you when you say you just want to get back to the things you love and not worry about this pandemic or an election," Trudeau said in his post-victory speech hours earlier.

President Joe Biden called Trudeau on Tuesday to congratulate him.

Conservative leader Erin O'Toole was expected to face questions about whether he will be able to keep his job.

"The results are disappointing for the Conservatives, and O'Toole's move towards the center is a source of contention within the party," said Daniel Beland, a political science professor at McGill University in Montreal.

Conservative campaign co-chairman Walied Soliman said before the votes were counted that holding Trudeau to a minority government would be a win. But Jenni Byrne, campaign manager and deputy chief of staff to former Conservative Prime Minister Stephen Harper, said she was "stunned" by Soliman's comments and later said O'Toole gave a tone-deaf concession speech in which he acted as if he'd won.

O'Toole said he was more determined than ever to continue, but his party might dump him as it did his predecessor who failed to beat Trudeau in 2019. Whether he remains Conservative leader has big implications for the conservative movement in Canada. If he's removed, the party could swing back to the right.

A politician who narrowly lost the leadership of the Conservative Party in 2017 and who now leads a far-right party that opposes vaccines and lockdowns bled support from O'Toole's Conservatives and helped the Liberals retain power. Maxime Bernier and the People's Party of Canada didn't win any seats in Parliament, but support for his party led to some Conservative party losses.

Nelson Wiseman, a political science professor at the University of Toronto, said the People's Party of Canada cost the Conservative Party about 10 seats.

O'Toole advertised himself a year ago as a "true-blue Conservative." He became Conservative Party leader with a pledge to "take back Canada," but immediately started working to push the party toward the center.

O'Toole's strategy, which included disavowing positions held dear by his party's base on issues such as climate change, guns and balanced budgets, was designed to appeal to a broader cross-section of voters in a country that tends to be far more liberal than the United States.

Whether moderate Canadians believed O'Toole is the progressive conservative he claims to be and whether he alienated traditional Conservatives became central questions of the campaign.

Trudeau argued that the Conservatives' approach on the pandemic, which has been more skeptical of lockdowns and vaccination mandates, would be dangerous. And he played up his own party's successes. Canada has one of the highest vaccination rates in the world, and Trudeau's government spent hundreds of billions of dollars to prop up the economy amid lockdowns.

Trudeau supports making vaccinations mandatory for Canadians to travel by air or rail, which the Conservatives oppose. 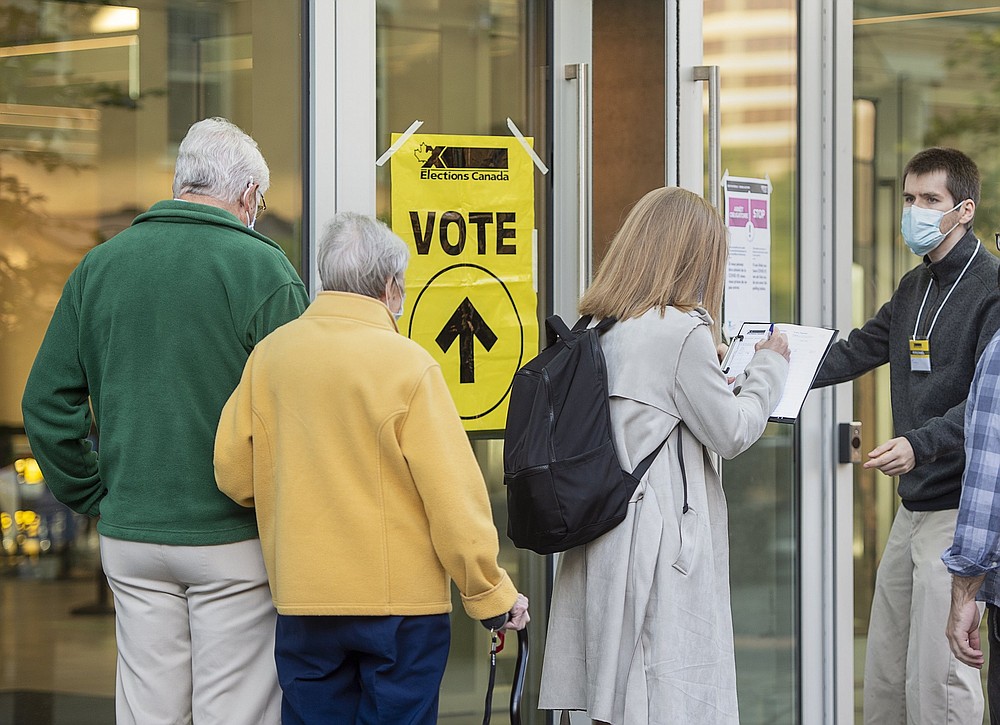 A voter provides COVID-19 contact-tracking information at the Halifax Convention Centre as they prepare to vote in the federal election in Halifax on Monday, Sept. 20, 2021. (Andrew Vaughan/The Canadian Press via AP)