Influx ‘a crisis too many,’ official says by Compiled Democrat-Gazette Staff From Wire Reports | September 22, 2021 at 6:56 a.m. 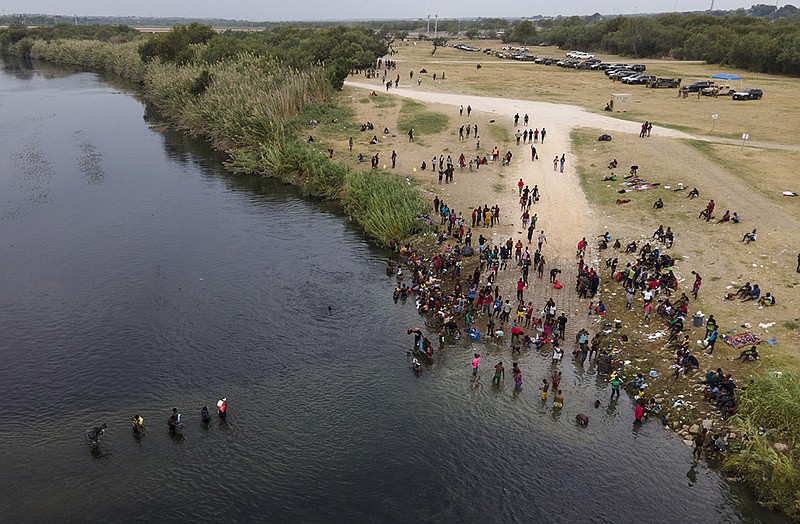 Migrants, many from Haiti, are seen wading between the U.S. and Mexico on the Rio Grande, Tuesday, Sept. 21, 2021, in Del Rio, Texas. The options remaining for thousands of Haitian migrants straddling the Mexico-Texas border are narrowing as the United States government ramps up to an expected six expulsion flights to Haiti and Mexico began busing some away from the border.(AP Photo/Julio Cortez)

PORT-AU-PRINCE, Haiti -- The United States is preparing to nearly double the number of Haitians being deported to this Caribbean state from Texas starting today, raising alarm that thousands of cash-strapped migrants will add a new dimension to the humanitarian crisis in a country torn apart by violence, natural disaster and political strife.

The Western Hemisphere's poorest nation is already dealing with a convergence of crises -- including the aftermath of a presidential assassination, a deadly earthquake, worsening food insecurity and rising social anarchy amid a grab for territory by gang warlords.

So limited are resources to aid returning deportees -- some of whom are coming back to their country for the first time in years -- that they are essentially leaving the airport with little more than a hot meal, basic hygiene kits, a medical assessment and a small cash handout, setting out without the promise of transportation or shelter into a capital reeling from a wave of kidnappings and killings.

On Sunday and Monday, several hundred migrants per day arrived on up to three flights to Port-au-Prince, with four flights scheduled for Tuesday. But international agencies have been told that the United States will begin ramping up to "six to seven" flights daily, to Port-au-Prince as well as Haiti's second-largest city, Cap-Haitien.

"We're talking about potentially up to 1,000 people per day," said Giuseppe Loprete, Haiti mission chief for the International Organization for Migration. "This is our understanding. This is our challenge."

[Video not showing up above? Click here to watch » https://www.youtube.com/watch?v=DDAkWQXjNCE]

A spokesperson for the Department of Homeland Security could not confirm the flight plans, citing operational and security factors. However, two U.S. officials not authorized to discuss the plan and speaking on condition of anonymity confirmed that the flights would increase.

But two other U.S. officials said Tuesday that many migrants are being released in the U.S.

Haitians have been freed on a "very, very large scale" in recent days, according to one U.S. official who put the figure in the thousands. The official, who has direct knowledge of the operations and was not authorized to discuss the matter, spoke on condition of anonymity.

Many have been released with notices to appear at an immigration office within 60 days, an outcome that requires less processing time from Border Patrol agents than ordering an appearance in immigration court, the official said.

A second U.S. official said large numbers of Haitians were being processed under immigration laws and were not being placed on expulsion flights. The official couldn't be more specific about how many.

Jean Negot Bonheur Delva, head of Haiti's migration office, said the government did not "have the means" to provide housing or other assistance for those who have been put on the expulsion flights.

"The precarity and the insecurity will increase exponentially," he said. "It's one crisis too many."

Bonheur Delva said he had personally called for a moratorium to the flights but that he didn't know whether Haiti's interim government had made any official request. Haiti's embattled interim prime minister, Ariel Henry, is clinging to power, holding on in part because of his backing from the United States.

Bonheur Delva suggested that Henry, who did not respond to a request for comment, was in no position ask the Americans to halt the flights, even though Haiti cannot cope with the escalating numbers of returnees.

The State Department said Monday that Secretary of State Antony Blinken  had spoken with Henry about  "cooperation to repatriate Haitian migrants on the Southern border of the United States" and had shared his appreciation with the Haiti government "for assisting to repatriate Haitian citizens safely and expeditiously."

"The United States and Haiti share a mutual concern for the safety of Haitian citizens and discussed the dangers of irregular migration, which puts individuals at great risk and often requires migrants and their families to incur crippling debt," the State Department said.

In a phone interview, Foreign Minister Claude Joseph said Haitian officials were seeking to work with "our American friends" as well as Mexico, Chile and Brazil to try to "work together in a more structural way" to resolve the problem.

Many of the Haitian migrants had lived for years in Chile and Brazil before venturing north in recent weeks. Some Haitian parents are being deported with children who have Chilean and Brazilian passports, and many say they would prefer to go back to those countries now but lack the means to get there.

Asked whether Haiti would request or had officially requested a halt to the flights, Joseph replied: "They are our fellow Haitians. If they have to come back, we have to receive them and try to do our best to accommodate them."

WOE ON TOP OF WOE

The deportees are arriving in a country where U.N. agencies are making emergency appeals to fend off a mounting food crisis, thousands have fled their homes in the capital to escape takeovers by violent gangs allegedly linked to politicians, and the police force has essentially been overwhelmed.

Some of the deportees hailed from Haiti's now devastated south. More than a month after the deadly earthquake struck that region and killed more than 2,200 people, more than half of those in need have yet to receive aid, according to the United Nations. More than 137,000 homes were damaged or destroyed; 212,000 people have lost access to safe drinking water.

"These people will create a new crisis for the country. Some of these people will not have a place to stay," said Pierre Esperance, director of Haiti's National Human Rights Defense Network.

"We don't know their situations. What if some of their families were killed by the gangs or by the authorities, and now they are just being sent back? Each family has their own situation, and that's why the international law requires someone to listen to them," Esperance said.

Several deportees said at the airport that they would try to reach family or friends for temporary shelter. Others said they had no immediate options.

Jeeffry Seendhy Youssheff Pierre, 27, landed in Port-au-Prince on a deportee flight Monday. He spent his first night at the home of a distant friend, but had been told there would be no more room for him.

So early Tuesday, he returned to the airport, desperate for information on how he could return to Chile -- the nation he migrated to four years ago before trekking to the Texas border recently.

He is from a Haitian island off the central coast. "But I can't go back there," he said. "My mother is poorer than I am. We would starve."

He left Chile, he said, "because I couldn't get legalized and life was hard, so I tried to go to the United States," he said. "But I can't stay here. Haiti is hell."

He and other deportees said U.S. authorities bound them in chains during the trip.

He said he had received the equivalent of $25 from authorities after he got off the plane, and feared he wouldn't survive long on so small a sum. Authorities have promised $100 per person, but shortages of cash have hampered initial handouts, and balances are expected to be transferred by cellphone in the coming days.

The Biden administration is not conducting the flights as formal deportations, relying instead on an emergency provision of the U.S. public health code known as Title 42 that allows authorities to bypass normal immigration proceedings. It generally does not allow asylum seekers a chance to request humanitarian protection in the United States.

A federal judge last week ordered the Biden administration to halt the use of Title 42 for migrant families, but he stayed the ruling until the end of the month. Administration officials have been returning both single adults and family groups to Haiti.

"The Biden administration pushing back on this stay of expulsions is another example of broken promises to treat migrants with respect and humanity when they reach our borders to exercise their fundamental right to asylum," said Karla Marisol Vargas, senior attorney with the Texas Civil Rights Project and co-counsel on the litigation.

NAACP President Derrick Johnson demanded a meeting with Biden to discuss the situation and called the treatment of the migrants "utterly sickening."

"The humanitarian crisis happening under this administration on the southern border disgustingly mirrors some of the darkest moments in America's history," he said in a statement.

Homeland Security Secretary Alejandro Mayorkas told senators Tuesday that Homeland Security intends to empty the Del Rio, Texas, camp -- where in the past week thousands of Haitian migrants have gathered -- within 10 days. He said he expected "dramatic results" over the next two to four days as authorities send caravans of buses to transport migrants out of Del Rio.

'WE'LL GET IT UNDER CONTROL'

Amid a growing outcry from some Democrats -- particularly after widely published images Monday of mounted Border Patrol agents attempting to grab migrants and using their horses to push them back toward Mexico -- the administration has sought to defend the mass deportations.

Mayorkas said Tuesday the images "horrified" him. But he said that damage from the recent earthquake had been "rather geographically limited" and that an analysis of the situation on the ground had determined that "country conditions" allowed for the repatriations. On Monday, White House press secretary Jen Psaki told reporters: "We're trying to protect people. We're conveying this is not the time to come."

Biden said Tuesday, "We'll get it under control."

Senate Majority Leader Charles Schumer, D-N.Y., said images of the treatment of the migrants "turn your stomach" and called on the administration to discontinue the "hateful and xenophobic" policies of Biden's predecessor, Donald Trump.

"The policies that are being enacted now -- and the horrible treatment of these innocent people who have come to the border -- must stop immediately," he told the Senate on Tuesday.

At the same time, the administration continues to face attacks from Republicans who say Biden isn't doing enough to deal with what they call a crisis at the border.

Twenty-six Republican governors called on the president to change his border policies. "A crisis that began at the southern border now extends beyond to every state and requires immediate action before the situation worsens," they said.

Republican Texas Gov. Greg Abbott, during a visit to Del Rio on Tuesday, said the county's top official told him the most recent tally was about 8,600 migrants who remain there. He continued to slam the Biden administration and expressed skepticism the area would be cleared soon.

"They have shown no capability of being able to process all of these migrants by the end of the week," Abbott said. "The only thing they have shown is an incapability of dealing with this crisis candidly, in a way where they pretend it doesn't even exist. We're here to tell you, it exists, it's total chaos, and the Biden administration, they need to up their game big-time."