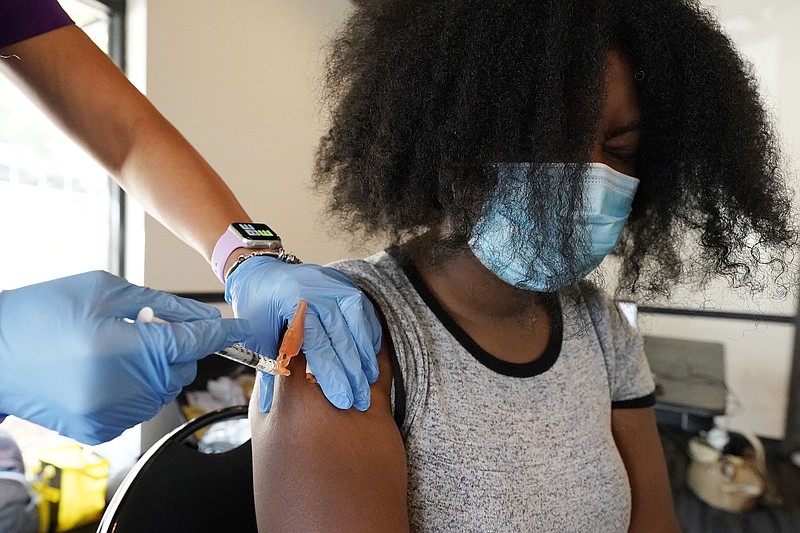 Jackson State University student Kendra Daye, right, reacts as Tameiki Lee, a nurse with the Jackson-Hinds Comprehensive Health Center, injects her with the Pfizer COVID-19 vaccine, in Jackson, Miss., across the street from the university, Tuesday, Sept. 21, 2021. The university in cooperation with Jackson-Hinds, provided vaccinations for community residents, faculty, staff and students, free of charge. The Board of Trustees of the Institutions of Higher Learning voted last week to ban public universities from requiring the COVID-19 vaccine for students, faculty and staff. (AP Photo/Rogelio V. Solis)

Covid-19 deaths in the U.S. have climbed to an average of more than 1,900 a day for the first time since early March, with experts saying the virus is preying largely on a distinct group: 71 million unvaccinated Americans.

The increasingly lethal turn has filled hospitals, complicated the start of the school year, delayed the return to offices and demoralized health care workers.

"It is devastating," said Dr. Dena Hubbard, a pediatrician in the Kansas City, Mo., area who has cared for babies delivered prematurely by cesarean section in a last-ditch effort to save their mothers, some of whom died. For health workers, the deaths, combined with misinformation and disbelief about the virus, have been "heart-wrenching, soul-crushing."

Twenty-two people died in one week alone at CoxHealth hospitals in the Springfield-Branson area of Missouri, a level almost as high as that of all of Chicago. West Virginia has had more deaths in the first three weeks of September -- 340 -- than in the previous three months. Georgia is averaging 125 dead per day, more than California or other more-populous states.

"I've got to tell you, a guy has got to wonder if we are ever going to see the end of it or not," said Collin Follis, who is the coroner in Missouri's Madison County and works at a funeral home.

The nation was stunned in December when it was witnessing 3,000 deaths a day, but that was when almost no one was vaccinated.

Now, nearly 64% of the U.S. population has received at least one dose of vaccine. And yet, average deaths per day have climbed 40% over the past two weeks, from 1,387 to 1,947, according to data from Johns Hopkins University.

Health experts say the vast majority of the hospitalized and dead have been unvaccinated. While some vaccinated people have suffered breakthrough infections, those tend to be mild.

The number of vaccine-eligible Americans who have yet to get shots has been pegged at more than 70 million.

"There is a very real risk you'll end up in the hospital or even in the obituary pages," Dr. Bruce Vanderhoff, chief medical officer for the Ohio Department of Health, said to the unvaccinated. "Don't become a statistic when there is a simple, safe and effective alternative to go out today and get vaccinated."

Many low-vaccination communities also have high rates of conditions like obesity and diabetes, said Dr. William Moss of Johns Hopkins. And that combination -- along with the more-contagious delta variant -- has proved lethal.

"I think this is a real failure of society and our most egregious sin to be at this stage where we have hospitals overwhelmed, ICUs overwhelmed and hitting this mark in terms of deaths per day," Moss said.

New cases of the coronavirus per day in the U.S. have dropped since the start of September and are now running at about 139,000. But deaths typically take longer to fall because victims often linger for weeks before succumbing.

In Kansas, 65-year-old cattleman Mike Limon thought he had beaten covid-19 and went back to work for a few days. But the virus had "fried" his lungs, and he died last week, said his grandson, Cadin Limon, 22, of Wichita.

He said his grandfather didn't get vaccinated for fear of a bad reaction, and he hasn't gotten the shot either for the same reason, though serious side effects from the vaccine have proved extremely rare.

He described his grandfather as a "man of faith."

"Sixty-five is still pretty young," the young man said. "I know that. It seems sudden and unexpected, but covid didn't surprise God. His death wasn't a surprise to God. The God I serve is bigger than that."

Cases are falling from pandemic highs in West Virginia, but deaths and hospitalizations are expected to continue increasing for as long as six more weeks, said retired National Guard Maj. Gen. James Hoyer, who leads the state's coronavirus task force.

Dr. Greg Martin, who is president of the Society of Critical Care Medicine and practices mostly at Grady Hospital in Atlanta, said the staff is buckling under the strain.

"I think everyone in 2020 thought we would get through this. No one really thought that we would still be seeing this the same way in 2021," he said.

In Oklahoma, Hillcrest South Hospital in Tulsa is among several medical centers around the country to add temporary morgues. Deaths are at an all-time high there, at three to four times the number it would see in a non-covid-19 world, said Bennett Geister, hospital CEO.

He said the staff is worn out.

Meanwhile, Johnson & Johnson announced Tuesday that a second shot of its vaccine boosts protection against symptomatic and severe covid-19.

Those booster shots also generated additional antibodies -- molecules churned out by the immune system to help fight off infections.

"It's very exciting news," said Vanderbilt University Medical Center infectious-diseases and preventive medicine professor William Schaffner, though he cautioned that not all of the data have been seen and that information must be reviewed by the Food and Drug Administration before recommendations can be made.

"The people who received J&J have been a little concerned that they've been left in the shade when it comes to repeat vaccination," Schaffner said. These results seem encouraging that those vaccine recipients might "expect a booster in their future."

Under the FDA's emergency use authorization, the Johnson & Johnson vaccine is given as a single dose, unlike the two shots required for full immunization with the Pfizer-BioNTech and Moderna mRNA vaccines.

Results published this summer indicate that the Johnson & Johnson vaccine generates lasting amounts of antibodies able to target the delta variant and other variants of concern. In June and July, when delta was ascendant, the effectiveness of the one-shot vaccine was 78% against observed covid-19, according to a report published Thursday that has not yet gone through peer review.

A second dose, given 56 days after the first, further improves protection, the company said Tuesday. According to the company's Ensemble 2 study, a Phase 3 randomized clinical trial, efficacy was 100% against severe or critical covid-19 when assessed at least two weeks after the booster. Efficacy against symptomatic disease in the United States was 94% and 75% globally.

"We now have generated evidence that a booster shot further increases protection against covid-19 and is expected to extend the duration of protection significantly," Johnson & Johnson chief scientific officer Paul Stoffels said.

"This is good news and moves us closer to having an answer about the utility of boosters for the millions of Americans who received the J&J covid-19 vaccine," said Lisa Maragakis, an infectious-disease epidemiologist at Johns Hopkins University School of Medicine. "Of course we will need to wait to see the actual data and hear from both the FDA and CDC [Centers for Disease Control and Prevention] as they review it."

Antibody levels spiked after booster shots. People who received a Johnson & Johnson booster two months after vaccination had antibody levels four to six times higher, while the levels in people who had boosters at six months rose 12-fold in the next four weeks, the company said.

"An increase in antibodies is associated with two good features," said Schaffner of Vanderbilt. First, this increase can lead to longer-lasting protection. Second, he said, "not only do you get more antibodies, but a wider display of antibodies," which means an immunized person is likely to be better-defended against a variety of variants.

Regulators would have to authorize Johnson & Johnson booster shots before the public could receive them.

On Sunday, National Institute of Allergy and Infectious Diseases Director Anthony Fauci told NBC News that the FDA review of second Johnson & Johnson shots, as well as Moderna boosters, is "a couple to a few weeks away. ... We're working on that right now to get the data to the FDA so they can examine it and make a determination about the boosters for those people."

Because it does not require a second appointment, the Johnson & Johnson vaccine had been sent to harder-to-reach communities soon after the shot became available. Nearly 15 million Americans received Johnson & Johnson doses, while about 166 million people have been fully vaccinated with the shots made by Pfizer-BioNTech and Moderna.

Information for this article was contributed by Heather Hollingsworth of The Associated Press and by Ben Guarino of The Washington Post.