Banking on backs: Unit shouldering the load for Hogs 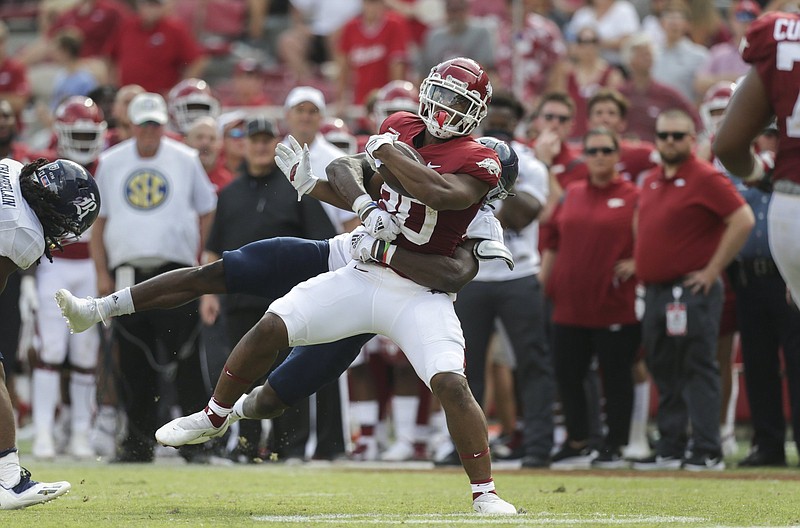 Arkansas running backs Dominique Johnson (shown, 20) and Trelon Smith are key parts of the Razorbacks’ improved rushing attack and are joined by freshmen Raheim Sanders and AJ Green. Johnson and Smith each have ran for a touchdown in the first three games, the first Hogs tandem to do that in 18 years. (NWA Democrat-Gazette/Charlie Kaijo)

FAYETTEVILLE -- Trelon Smith and Dominique Johnson are up to something historically significant for the Arkansas Razorbacks.

The University of Arkansas tailbacks just pulled off a feat that had not been accomplished for the Hogs since 2003. And if the combination of Darren McFadden, Felix Jones and Peyton Hillis didn't do it in the mid-2000s it has to be special.

Smith and Johnson will enter Saturday's 2:30 p.m. game for No. 16 Arkansas (3-0) against No. 7 Texas A&M (3-0) in Arlington, Texas, having scored one rushing touchdown apiece in each of the first three games.

No Razorback tailback combo has scored on the ground in the first three games of a season since Cedric Cobbs and De'Arrius Howard 18 years ago.

Perhaps the most interesting facet of the feat for Smith and Johnson is that they aren't necessarily the primary 1-2 punch for the Kendal Briles offense. Raheim "Rocket" Sanders and AJ Green have also shouldered a lot of the rushing load with 241 combined yards and contributed to the Razorbacks' 11 scores on the ground, as have quarterbacks KJ Jefferson and Malik Hornsby.

Texas A&M Coach Jimbo Fisher, when asked about the Razorbacks' run game and their ability to plug multiple backs into the schemes, mock complained.

"I'm over here trying to game plan and you're trying to give me another headache," Fisher said. "The versatility they bring, the physicality they bring and then the speed to be able to get the ball outside and diverse runs with the quarterback runs and the [run-pass options] and then the way they run it, it's a heck of a system.

"Their offensive line is very well-coached and they have excellent ball-carriers. The quarterback is not only athletic, but he's big and strong and hard to get on the ground. When you combine those things, it's a heck of a combination."

"They've got a lot of good running backs: Young, talented and willing," O'Neal said. "I love that. I'm ready for the competition honestly. I'm kind of fired up."

The Arkansas tailbacks, with Josh Oglesby and Javion Hunt added in, have split up 104 carries, an average of nearly 35 per game. Position coach Jimmy Smith makes the calls on who plays when, and he's seemed to have a good feel for the rotation, with each of the top four backs already accounting for at least one run of 22-plus yards.

"Coach Smith does a really good job of rotating our running backs in," Coach Sam Pittman said. "They each have a different skill set to them. Coach Smith's done a nice job of kind of figuring out who the right guy at the right time is to have in the game. I've left that up to him."

Smith, the veteran starter, certainly gets plenty of chances, with a team-high 42 carries, exactly 14 per game, for 216 yards.

Johnson has scored a touchdown on every five carries during his redshirt freshman year. Considered the team's "big back," he also has the team's longest run, a 48-yard breakaway up the gut last week.

Johnson's scores came from the 3 in the final minute against Rice, the 5 against Texas and the 11 against Georgia Southern.

"We have different packages for each back," Johnson said. " I mean, it can be a period of time where you're sitting on the sideline, and somebody else may be in the game, but you've got to stay ready at all times because you never know when you're going to go in the game."

Johnson almost missed out on tailback-palooza because he was moved to tight end during camp when that position was down in numbers. Because Smith missed time with a turf toe and Green was dealing with a concussion, Johnson was back in the running back room after one day.

"Moving to tight end, it really put a fire under me because I wanted to come in and play running back because running back's all I've been playing," said the 6-1, 235-pound Johnson. "So them moving me to tight end made me just want to go harder at running back to show them I'm an actual running back."

Pittman joked on his radio show shortly after the move that Johnson made an immediate vast improvement after coming back and after a couple of moves he could be the next McFadden or Herschel Walker.

Every running back has added some kind of value in the small sample size of three games. Offensive lineman Ty Clary was asked specifically about Sanders' best attributes.

"Like all our backs, how hard he runs, Clary said. "I mean that Texas touchdown where he tries to run through the guys and runs into the end zone, that's awesome for us to watch as O-linemen."

"It's fun to watch him run too, because ... a lot of other backs will try to run past you ... but Dom, it's kind of like he's looking for contact out there. He wants to run over you."

The 2003 Arkansas offense invites comparisons to the current Razorbacks for a few reasons, namely a devotion to the ground game. The 2021 Razorbacks have 139 carries, a handful on broken pass plays or sacks, and 65 pass attempts, a virtual 2 to 1 ratio.

The newest edition of the Razorbacks will have to knock off tough A&M to open with four consecutive wins, and the Aggies have a gifted front four and veterans in all three levels of the defense.

"They have a really solid base defense," Johnson said. "They can fly to the ball. So we're going to try to do what we can to use their abilities against them."

Said Clary, "They do a lot of really good things and I'm excited to see how we match up."

"I really love their defense," Pittman said. "I think going into this year, part of the reason A&M was ranked so high ... had to do with that defense and particularly the defensive front."

The Aggies also have key returning starters in the secondary, including safeties O'Neal and Demani Richardson and corners Myles Jones and Jaylen Jones.

"I feel like we're the best defense in the country," O'Neal said. "We've got talent on every level and there's no excuse for failure." 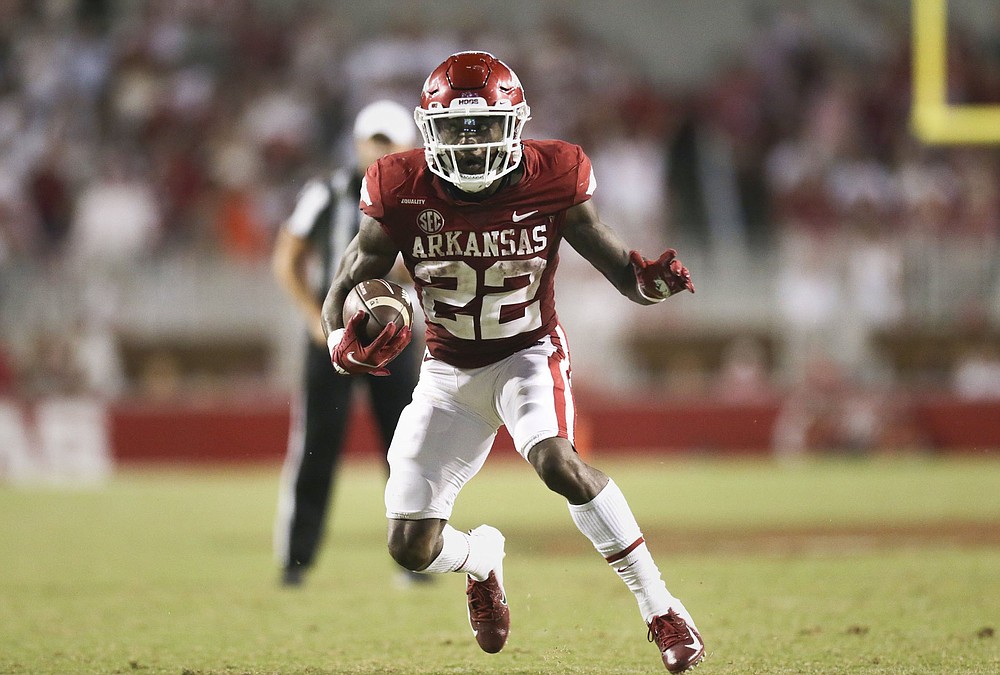 Trelon Smith has a team-high 42 carries, exactly 14 per game, for 216 yards and 3 touchdowns this season. (NWA Democrat-Gazette/Charlie Kaijo)