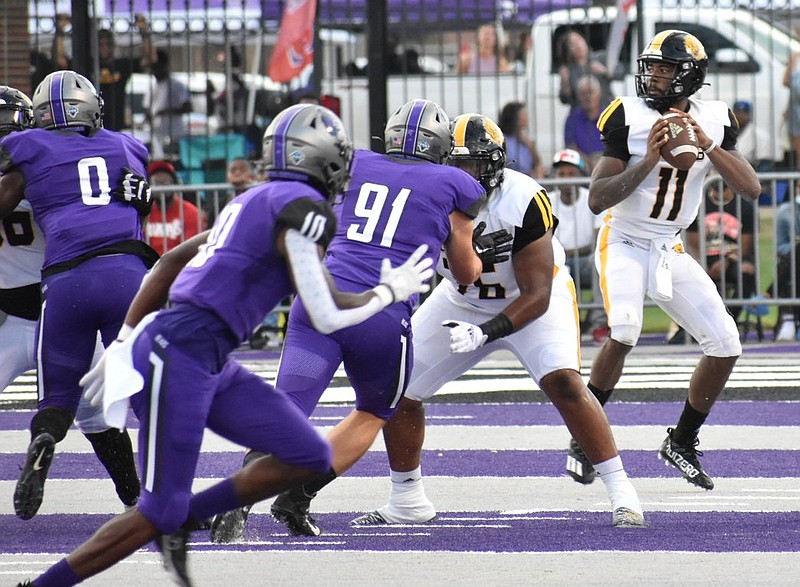 The Golden Lions got off to a slow start, felt they occasionally left yards and points on the field and never gave themselves a chance to fully complete a comeback in the fourth quarter after allowing the Bears to put together two scoring drives that drained nearly nine minutes off the clock.

But the page on the renewal of the UAPB-UCA rivalry had to be turned quickly for the Golden Lions because they're about to face a team that's dominated the Southwestern Athletic Conference more times than not over the past seven years -- on short rest.

UAPB (1-1) will open up the conference portion of its schedule today when it hosts Alcorn State (1-2) at 6:30 p.m. at Simmons Bank Field. The game will be televised by ESPNU.

For the Golden Lions, playing a game five days after the previous one isn't ideal, especially when that prior outing came against a fellow in-state program. Yet, UAPB Coach Doc Gamble feels the quick turnaround between games isn't a bad situation for his Golden Lions.

"This is one that you look forward to," he said. "You want to get back to it right away because you want to get that bad taste out of your mouth. Sometimes you can hang on to a loss to long. It's time to move on to the next one and playing so soon afterwards helps that.

"Of course, we're playing on a shorter time frame than all the other ones, but this is one that I welcome."

The Golden Lions will try to be as unwelcoming as possible to the Braves, who could very easily be undefeated.

Alcorn State, which has won four SWAC titles since 2014 and six of the league's past seven East Division championships, lost to North Carolina Central (23-14) and South Alabama (28-21) after leading both games well into the third quarter. The way the Braves performed against South Alabama was especially commendable, considering the predicament they were put in beforehand.

The program had to cancel practices Monday and Tuesday of last week because of the lack of trainers. Instead, the Braves were forced to have only walk-through sessions. The school does not have a full-time trainer on its staff, and the contracted trainers they employed were out due to covid-19 protocols.

But Alcorn State Coach Fred McNair knew what to expect out of his team anyway in a road game against a Sun Belt Conference opponent in South Alabama despite the mitigating factors.

"We prepare them for just about anything that can happen," he said. "Just being the coaches that we are and presenting things that could happen during the course of a ballgame or the course of a week of practice, these young men understand that and are going to fight for this staff. They respond to great leadership, and I think that's what we give those young men as a coaching staff. ... The opportunity to be successful not only as football players but in the classroom as well.

"They love football and rely on their coaching staff to put them the best position to win ballgames."

A win today would be a boost for both teams, particularly with a number of key games upcoming. Still, the Golden Lions would prefer to go into next week's game at Prairie View A&M riding a winning streak instead of a two-game skid.

Gamble said UAPB didn't do itself any favors last week at UCA either. The Bears scored 14 points off two Golden Lion turnovers, the latter of which set the final score.

"We've got to play at a certain level at all times throughout a game," Gamble said. "We came out flat, and you've got to play this game with a lot of energy and enthusiasm all the time. I loved the fact that we fought back, but you can't peak and then drop off too much.

"Those are things that we can't do."

The Braves' defense ranks 14th in the FCS in turnovers with seven, and 10th in turnover margin at plus-5. Alcorn also has a top-level quarterback in Felix Harper and a host of guys who are capable of turning short gains into longer ones.

"They've got a good offense of course with Felix, but they're defensive-minded," Gamble said. "They've got a very patient defense. And what I mean by patient is that they're always in the spots that they're suppose to be in. They're not running around and being out of place. They're very sound on that side of the ball.

"And of course, they can move the ball and score effectively when they have it on offense."

Harper, who was the SWAC Offensive Player of the Year in 2019, has completed 50 of 83 passes for 623 yards and 3 touchdowns for the Braves while running backs Niko Duffey and Stadford Anderson each have more than 120 yards on the ground.

UAPB did have success corralling UCA's ball carriers last week, but the Golden Lions' secondary struggled. UCA's Breylin Smith, who threw for 329 yards and four touchdowns, at one point completed 15 passes in a row. McNair, though, isn't putting a lot into what the Golden Lions did a week ago.

He believes UAPB has put that one behind them and will be more than ready today.

"Coach Gamble is a hard-working coach, I can say that about him," McNair said. "He's going to make sure that his team is prepared for this conference opener. They've got a lot of great players, it's a great football team period. Got a great quarterback in Skyler Perry that does phenomenal stuff that's going to cause our defense havoc.

"The things they can do on offense, we have to prepare for it on our defense. And defensively, they're going to be very solid. Our work is cut out for us on a short week."

NOTEWORTHY The last time UAPB beat Alcorn State in 2016, the Braves went on to win the Southwestern Athletic Conference East Division title for the third consecutive year. The victory was also the only one the Golden Lions registered that season. … UAPB quarterback Skyler Perry is 31-of-63 (49.2%) passing for 362 yards with 1 touchdown and 1 interception on the year. The junior was 13 of 32 for 173 yards last week against the University of Central Arkansas. … Transfer running back Kierre Crossley has run for 134 yards, which lead the Golden Lions. His three touchdowns are also a team high. … Alcorn State has five players that have caught at least five passes. LeCharles Pringle has 14 catches for 157 yards, both of which are tops for the Braves.