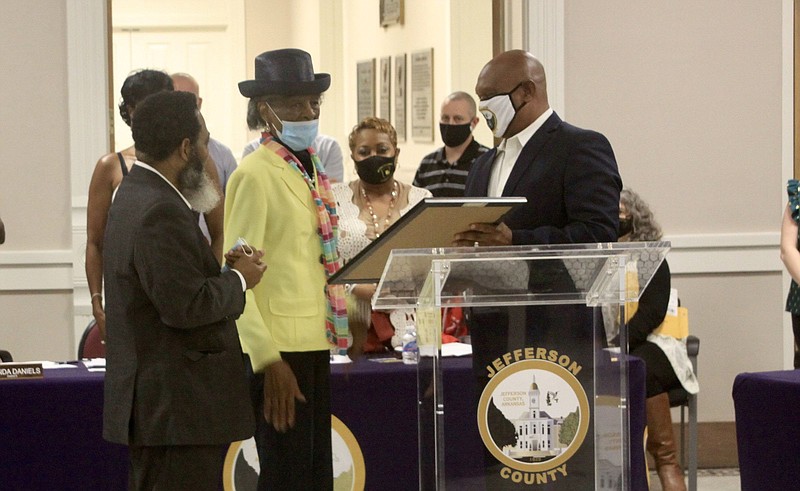 The Jefferson County Quorum Court voted Tuesday to authorize a transfer of $356,860 to the County Road Fund to repair bridges on Wilson Road and Mulberry Grove Road in Wabbaseka.

Earlier this month during a Jefferson County Quorum Court committee meeting, County Judge Gerald Robinson informed the committee members that he had left off the agenda the need to appropriate money from the county's reserve funds to repair the Mulberry Grove Road bridge and the Wilson Road bridge, which collapsed but its failure happened after the structure had been closed.

An appropriation ordinance amending the 2021 budget of the general fund to provide salary increases for all full-time county employees retroactive to Sept. 1 received a round of applause from county employees upon its passage by the Quorum Court.

Amendments to various county departments will provide a 6% salary increase.

According to the appropriation ordinance, some county employees will exceed 6% increases because of living wages, comparable salaries with other counties of the same class, special qualifications in education, years of service, job titles and duties.

Employees whose salaries are paid through the school district, part-time employees and grant-funded workers will not receive raises, according to the ordinance.

Another round-of-applause moment was the recognition of the first Black Jefferson County employee.

Justice of the Peace Alfred Carroll and Robinson presented Gladys Smith with an Office of the County Judge Proclamation for her lifelong commitments, selfless acts of compassion and courage.

Born in September of 1928 and a lifelong Pine Bluff resident, Smith was recognized in the Pine Bluff Commercial on Sept. 26, 1972, for her "me, too" attitude, according to Carroll.

"The Pine Bluff Commercial documented an important moment of the professional life of Mrs. Smith and denoted the important milestone for a struggling Black community and the history of Jefferson County," said Carroll, adding that Smith was quoted asking why there were no Blacks working in the county office. "Because of her courage, Smith became the first Black employee to be hired in the Jefferson County Clerk's Office where she served at the voter's registration desk."

Smith is a graduate of Merrill High School and an alumnus of Arkansas AM&N College (now the University of Arkansas at Pine Bluff) where she received a bachelor's degree in education.

"Her 'me, too' attitude and feistiness is well-known amongst her family and friends," said Carroll. "Her efforts in that day helped lead to a more prosperous day today for Jefferson County employees."

Carroll said that throughout Smith's life she continued and sought to improve the lives of others as she was employed in the Osceola, Wilmot and the Pine Bluff school districts.

"Her favorite pastime is S.L.O.W.-Sit and Look Out the Window," Carroll said, as Smith nodded and laughed.

The proclamation proclaimed the month of September as "Be Kind to Gladys Smith Month."

"This was a total surprise," Smith said, adding that all she was told was to be at the courthouse at 5:30. "My daughter just told me to put on something nice."

Robinson expressed his appreciation for Smith's boldness as he handed her the proclamation.

"It is always nice to recognize those in our community who have done so much. Sometimes people are forgotten that have contributed so much," Robinson said. "Here in Jefferson County, we want to recognize those who are leaders in our community and have done those things that have bridged the gap. Mrs. Smith has been one of those who have endeavored to do those things. We really appreciate her."

In other county business, an ordinance to provide a supplemental appropriation to the Victims of Crime Act grant position and a vote on filling a vacancy in the Victim-Witness department failed.

The appropriation ordinance was tabled earlier this month because the Quorum Court wanted to gain clarification on hiring since the county was under a hiring freeze.

Jefferson County Prosecuting Attorney Kyle Hunter had requested that the county help fund staff positions provided by the Victims of Crime Act grant after receiving notification that the funds would be reduced.

Hunter said he has five positions funded by the Victims of Crime Act, and 2½ positions will be affected by the cut in funding. Hunter stated previously that he would lose two grant-funded positions.