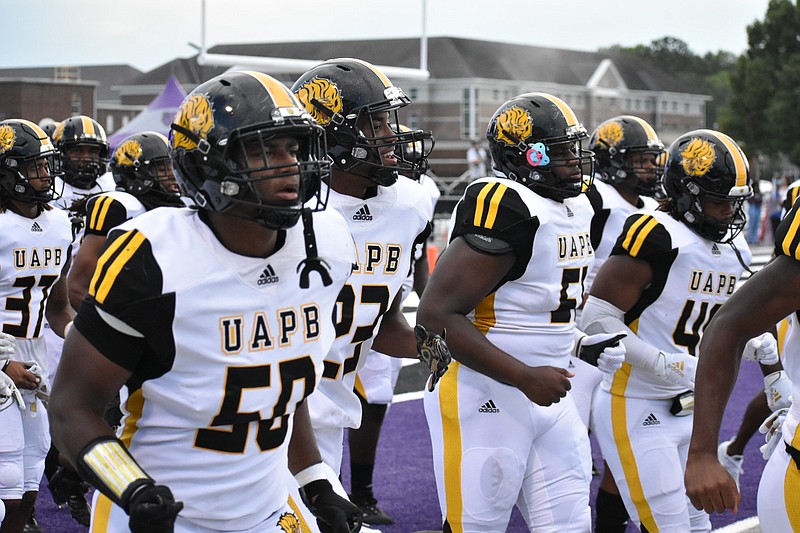 The UAPB Golden Lions will take the field for an ESPNU-televised game just five days after their last outing at the University of Central Arkansas. (Pine Bluff Commercial/I.C. Murrell)

As kickoff for the University of Arkansas at Pine Bluff's latest Thursday night football shindig approaches, national attention is likely pointed more toward its opponent.

Alcorn State University nearly pulled off an unlikely upset of a Football Bowl Subdivision team last Saturday after missing two practices earlier in the week without an available trainer. That same team, which won the Southwestern Athletic Conference championship in 2019, did not compete during the spring of this year, at the players' behest due to issues related to covid-19.

Now, the Braves (1-2), who lost 28-21 at the University of South Alabama five days ago, look to knock off the reigning SWAC Western Division champion Golden Lions (1-1) as the newest members of the six-team alignment. Kickoff of the SWAC slate for both teams is scheduled for 6:30 p.m., with the game airing on ESPNU.

"SWAC football is really fun, and we enjoy it," Lions Coach Doc Gamble said. "Going against UCA [University of Central Arkansas], I said, 'We can't just wait until SWAC play to get fired up,' so that was kind of my halftime speech. That kind of changed things for us. It's going to be one of those games our guys look forward to playing. What I like about this one is that we don't have to wait a long time to play again, especially coming off a loss."

It is the second of six games this season on the ESPN family of networks for the Golden Lions, who lost 45-23 last Saturday at UCA on ESPN+. It is also the seventh Thursday night game for the Lions since the 2010 season and first since beating Alcorn State 45-43 in Lorman, Miss., on Sept. 15, 2016, for their only win that year. The eighth is scheduled for next Thursday at Prairie View A&M University on ESPNU.

Alcorn State moved to the West after Bethune-Cookman and Florida A&M universities officially joined the SWAC on July 1.

And the Braves will have a new full-time athletic trainer on hand. Alcorn State announced Wednesday that Roderick Alexander Young was hired for a second stint with the program from a hospital in Brookhaven, Miss.

Sixth-year Braves Coach Fred McNair was asked if the outcome at South Alabama would have changed had the practices not been cancelled, but didn't say definitively.

Alcorn State represented the SWAC in the annual MEAC/SWAC Challenge on Aug. 28, losing to North Carolina Central University 23-14 in Atlanta. The Braves bounced back the next week at home in Lorman, Miss., and scored 10 points in the final quarter to beat Northwestern State University of the Southland Conference, 13-10.

Felix Harper, the Braves' quarterback, was the 2019 SWAC Offensive Player of the Year, when he racked up 2,954 yards and 33 touchdowns. Nicknamed "Triggerman," he has completed 50 of 83 passes for 623 yards and three touchdowns, the latest a 2-yard pass to Juan Anthony Jr. against South Alabama with 14:19 to go last Saturday to pull the Braves within the final score.

Harper's ability will challenge a UAPB defense that allowed 329 passing yards and four touchdowns by UCA's Breylin Smith, who also set a school record last Saturday by completing each of his first 15 passes.

The pass coverage must be shored up, Gamble said.

"We just can't have guys have career night against us," he said. "That's probably the best quarterback we faced, and I know Alabama A&M's got a good dude as well [Aqeel Glass]. The guy we just faced, we hit him, we turned him over, and he didn't get rattled.

It wasn't all bad for the Lions' defense, which got a touchdown interception return by cornerback Andre Fuller and another pick by cornerback Solomon Brooks, as well as a sack each by linebackers Monroe Beard III and Athen Smith.

Niko Duffey has played all three games at running back for the Braves, averaging just 46.7 yards per game and totaling 140 yards on 35 carries. Stadford Anderson, who transferred to Alcorn from Northwestern State, ran for 128 yards on 11 carries against North Carolina Central, but his status since then is not clear.

The Alcorn State defense has made four interceptions this season. Defensive back Juwan Taylor is the team's leading tackler with 20 stops this season, while linebacker Claudin Cherelus has recorded three tackles for losses.

"They'll be well-coached, stout on special teams, solid on defense and good on offense," Gamble said Monday. "We've got a short week to prepare. We've got to shore up some things and go out and perform on Thursday night."

UAPB's offense earned a 135-127 advantage over UCA in rushing yards behind the work of graduate student Kierre Crossley, who rushed for two touchdowns.

Gamble worked at Alcorn State during the 2012 season as a running backs and tight ends coach, as well as recruiting coordinator. McNair, whose younger brother Steve was a Heisman Trophy finalist in 1994 at Alcorn State and 2003 NFL co-Most Valuable Player with the Tennessee Titans, is in his fifth year as the Braves' coach.

"Fred and I, I've been able to lean on him since being able to get the job," Gamble said. "You know how it is, when you know somebody from the other team, he might get a phone call from me this week, and I'm sure I ain't going to get a text from him."

• SWAC records: First game for both