Respect is mutual for coaches

Soon after Fisher took the head coaching gig for the Aggies in December 2017, he checked in on Pittman, who was completing his second season on Kirby Smart's Georgia staff with an SEC Championship Game win over Auburn and a College Football Playoff title game loss to Alabama.

Pittman, asked on Monday about Fisher's interest back then, preferred not to answer the question and said Fisher would have to address it.

"Oh yeah," Fisher said later on the SEC call. "Just looking around for guys. I've always had a great respect for Sam. I think Sam has not only turned into a great head football coach, he was a great offensive line coach.

"Those are guys you're always interested in trying to talk to, guys who have a possibility of being on your staff. He's outstanding. I think he's a great guy, a great person. Love being around Sam."

[Video not showing up above? Click here to watch » arkansasonline.com/923pittman/]

Alabama Coach Nick Saban, a mentor to Fisher, also tried hiring Pittman away from first-year Arkansas Coach Bret Bielema in 2013, leading to a raise and an assistant head coach role for Pittman.

Fisher said his interest in Pittman began from afar, with him taking notice of great line play for different teams, then saying, 'Man, that team, who is their line coach? Sam Pittman," Fisher said.

"But once I did meet him a few years ago, just such a down-to-earth good guy. I mean a normal guy, good guy, genuine guy. I have a lot of respect for him as a coach, but as a person every time I've met with him. He's great to be around. I enjoy spending time with him, and I think he's outstanding."

Pittman, who had been in the Atlantic Coast Conference at North Carolina from 2007-11 while Fisher was building Florida State toward the 2013 BCS national championship, was equally complimentary of Fisher's status in the coaching world.

"Coach Fisher, in my opinion, is one of the greatest coaches in college football," Pittman said on Wednesday. "He'll have them prepared."

Burks posted a top speed of 22.6 miles per hour during his 91-yard catch-and-run touchdown in the third quarter.

Sam Pittman and Jimbo Fisher weren't giving out precise details on the availability of injured players on Wednesday's SEC teleconference, with "we'll have to see" being the phrase of the day.

"Neither one of them have practiced this week, so I don't know that it looks good or not that they're going to be able to play," Pittman said. "We'll see."

Fisher was asked about the status of top slot back Ainias Smith.

Fisher was also asked whether right guard Layden Robinson would be ready to return this week.

KJ Jefferson's 366 passing yards against Georgia Southern marked the first time an Arkansas quarterback had gone past the 360-yard mark since Austin Allen passed for 400 yards and 3 touchdowns in a 49-30 loss to No. 1 Alabama on Oct. 8, 2016, at Reynolds Razorback Stadium.

Jefferson became just the fifth FBS quarterback since 2000 to throw for at least 365 yards on 13 or fewer completions. Jefferson averaged 28.15 yards per completion against the Eagles, highlighted by a 91-yard screen pass touchdown to Treylon Burks and a 60-yard bomb to Warren Thompson.

Coach Sam Pittman said Wednesday that he had awarded a scholarship to receiver Warren Thompson just prior to the start of school. Pittman announced the scholarship on his Sunday television show after Thompson caught a 60-yard touchdown pass for his first Arkansas score.

"I'm not a flashy guy where I make a video or all that," Pittman said. "The purpose behind that is because guys are disappointed if they're not that guy, and I don't want to hurt anyone's feelings."

Pittman said he called Thompson over during a practice in the Walker Pavilion one day in camp and said, "I would not give him a scholarship until he blocked somebody. Then he had a good week of blocking."

Pittman said he has not awarded another walk-on with a scholarship yet this season.

"I know who they have up front because I lost to A&M trying to recruit them," Pittman said. "So they have a lot of talent up front."

The Aggies offensive line starters include center Luke Matthews, the latest in a long line of Matthews on the roster, if he returns from injury, fellow junior Kenyon Green, grad transfer Jahmir Johnson, redshirt freshman Aki Ogunbiyi and sophomore guard Layden Robinson, who is questionable in a return from injury.

The Razorbacks had three touchdown drives of 90-plus yards last week, going 94 and 99 yards in the first half and 91 in the second half.

Arkansas freshman Cam Little's warm-up for his final PAT against Georgia Southern turned into a meme over the weekend.

As Little took a practice swing during a pause, his plant foot slipped, sending the Moore, Okla., product tumbling to the grass. Little popped up quickly and none of his teammates, with the possible exception of holder Reid Bauer, appeared to notice. However, the official standing over the ball, moved to the side to see what had happened to Little, who made the PAT to set the final score of 45-10. Little is 15 of 15 on PATS to go along with 6 of 6 field goals for a team-high 33 points, which is tied with Alabama's Will Reichard as the top kick scorer in the SEC and tied for third in overall scoring. 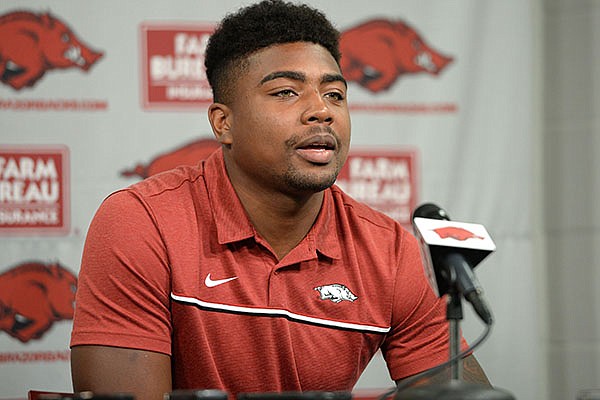