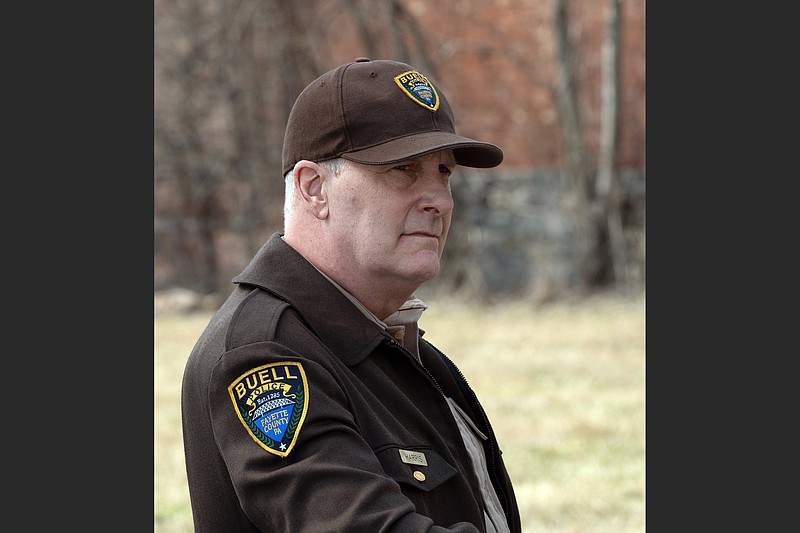 Jeff Daniels plays a police chief in a decaying small town in the rust belt in Showtime’s series, “American Rust.” He and other movie stars appreciate the challenges of acting in a TV series. (Dennis Mong/Showtime/TNS)

Big-screen talents such as Michael Keaton, Jeff Bridges, Taika Waititi, Nicole Kidman and Clive Owen can all be found in various television projects this fall.

No one has yet cajoled Tom Cruise into doing a TV series. But the way things are going, it doesn't seem like a mission impossible.

More and more movie stars are abandoning the notion that television is beneath them. Steve Martin has co-created Hulu's hilarious crime comedy, "Only Murders in the Building," luring his "Three Amigos" co-star Martin Short into the high jinks. Kate Hudson is taking a break from rom-coms to join Oscar-winner Octavia Spencer for the second season of Apple TV Plus' "Truth Be Told."

Jessica Chastain and Oscar Isaac, who co-starred in "A Most Violent Year," are reuniting for a new adaptation of Ingmar Bergman's miniseries, "Scenes From a Marriage," for HBO.

And Kevin Hart, whose movies have grossed more than $1 billion at the box office, is starring in and developing Netflix's "True Story," his first dramatic TV series.

"I did things for television here and there, but not much. But it's gotten so much better over the past 10 years," said Michael Keaton, who stars in "Dopesick," a forthcoming Hulu miniseries. "I don't think we're ever going to go back to the days where 'I'm only a movie guy' or 'I'm only a theater guy' or 'I'm only this kind of guy.' Forget all that.'"

Keaton relied a lot on the small screen in the late 1970s: a guest appearance on "Maude," sketch comedy with Mary Tyler Moore, a forgettable sitcom with Jim Belushi. But once he broke through as the wisecracking morgue attendant in 1982's "Night Shift," TV took a back seat.

At that time, actors who were popular enough to wear the Batman suit considered TV a step down.

John Wayne famously rejected the lead role in "Gunsmoke." James Stewart begged CBS to cancel his legal series, "Hawkins," after just one season. In his forthcoming autobiography, Ron Howard recalls how Henry Fonda seemed downhearted when they co-starred in a short-lived TV drama, "The Smith Family." Lucille Ball only committed to a sitcom after she bombed at the box office.

But one show altered attitudes.

"I think people realized what TV could be as soon as 'The Sopranos' came along," said writer/actor Sharon Horgan, who appears in Starz's forthcoming series "Shining Vale" with Oscar-nominee Greg Kinnear and Oscar-winner Mira Sorvino. "It was a film in every single episode."

"The honest answer is that Jim Gandolfini made it happen," Daniels said. "Back in the days of [Robert] Redford and [Dustin] Hoffman and [Robert] De Niro, you didn't lower yourself. But 'Sopranos' changed television, as did HBO, Showtime, Netflix, Amazon. All of a sudden, you've got all these other places to go. And as actors, you get to do more."

Daniels had carved out a successful career in theater and film, where he largely played second banana to bigger names in "Terms of Endearment," "Dumb and Dumber," "Speed" and "Something Wild." But he didn't become one of the industry's most celebrated actors until he committed to TV, a relationship that started with HBO's "The Newsroom," a series that earned him the first of two Emmys in 2013.

He would go on to star in the miniseries "The Looming Tower," "Godless" and "American Rust," which premiered on Sept. 12 on Showtime.

"I don't know if I would get the roles I get if it weren't for places like Showtime and others, because that's where all the writers went," Daniels said. "I couldn't be happier, because it has kept me in this business and allowed me to challenge myself."

Taika Waititi, who won an Oscar for writing "Jojo Rabbit" and directed the forthcoming sure-to-be-blockbuster "Thor: Love and Thunder," remains involved in television in large part because it allows him to launch pet projects that wouldn't get made for the big screen. His latest, Hulu's "Reservation Dogs," is a coming-of-age comedy featuring American Indians.

"The Hollywood things are fun, but this is probably closer to my heart because this means more to me," said Waititi, who also co-produces FX's "What We Do in the Shadows."

Few writers have benefited more by the migration of big stars to television than Ryan Murphy. His various anthology series have offered Jessica Lange, John Travolta and Susan Sarandon some of the richest roles in their long careers.

For Owen, committing to a miniseries probably wasn't a big deal. European and Australian actors have a long tradition of bouncing between different media without worrying about public perception.

"I see TV as an extension of film. It's just a longer version," said Nicole Kidman, who got raves for her work in the series "Big Little Lies" for HBO and "Nine Perfect Strangers" for Hulu. "I did a couple of small films early on in my career, but then I went straight into miniseries, which is primarily how I became really well known in Australia. So I've always embraced it."

Americans like Julia Roberts ("Homecoming") and Amy Adams ("Sharp Objects") have been borrowing from that playbook.