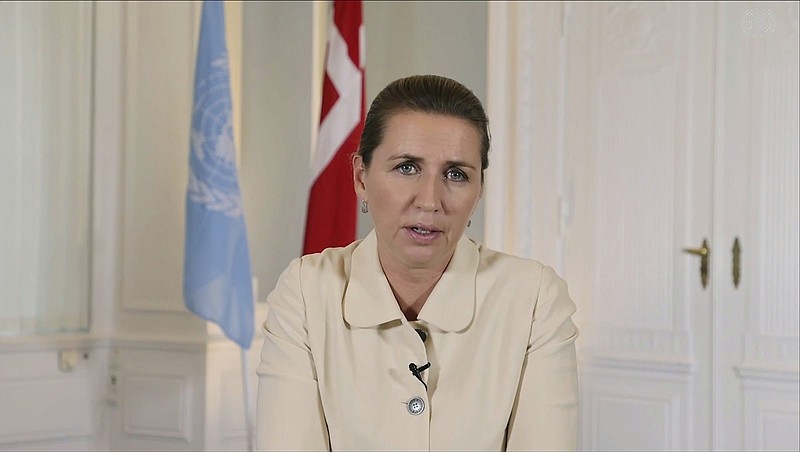 Prime Minister Mette Frederiksen of Denmark speaks in a prerecorded video Monday that was played at the U.N. In a newspaper interview, she sided with the U.S. against French criticism of a defense deal. (AP/UNTV)

SYDNEY -- French defense contractor Naval Group is preparing to send Australia a bill after a $66 billion contract was sunk by a secret deal between Canberra, Washington and London to share technology on nuclear-powered submarines and form AUKUS, a new three-nation defense alliance.

Naval Group chief executive Pierre Eric Pommellet told France's Le Figaro newspaper in an article published Wednesday that a bill would be sent to Canberra in the coming weeks. Australia had agreed in 2016 to buy 12 diesel-powered submarines from the French, and the break fee -- on top of the more than $1 billion reportedly spent during the design phase -- could be substantial.

Pommellet said that Australia had told his company, which is majority-owned by French taxpayers, to go ahead with a new phase of the program on the morning last week that the contract was terminated. "We were in shock. This decision was announced to us without any notice," he told the newspaper. "Very few companies have experienced such a [brutal] scenario."

Naval Group would bill the Australians for current and future costs related to infrastructure and redeploying employees, Pommellet said, adding that Canberra had asked for a detailed breakdown of costs. "Australia terminated the contract [on its own accord], which means that we are not at fault."

Canberra told Naval Group on Sept. 15 that a review had been completed, as required by contractual agreements, said a spokeswoman for Australia's Defense Ministry in an email. "This correspondence did not refer to or authorise commencement of the next phase of the program, which remained subject to the announcement of decisions by the Australian Government."

Australia has insisted that Prime Minister Scott Morrison warned French President Emmanuel Macron of problems with the contract during a visit to Paris in June. But there has been an ugly diplomatic rupture, with Macron recalling France's ambassadors to the U.S. and Australia over what it saw as a "betrayal."

Paris did not recall its ambassador to London, sparing Britain from the worst of the fallout partly because French officials saw it as a junior partner in the new defense pact, with Foreign Minister Jean-Yves Le Drian likening Britain's role to that of a "fifth wheel on the wagon."

But that didn't stop British Prime Minister Boris Johnson from telling reporters in Washington on Wednesday, in a mash-up of schoolboy French and English, that it was time for Paris to "Prenez un grip" ["Get a grip"] and "Donnez-moi un break" ["Give me a break"].

Morrison, who is in the U.S. for meetings with world leaders, said he has unsuccessfully tried to arrange a conversation with Macron. There has so far been no word on when France may return its envoy to Canberra.

Meanwhile, Denmark is siding with the U.S. in the dispute with its fellow EU member France.

Prime Minister Mette Frederiksen said in a newspaper interview that she wants to warn against turning "concrete challenges, which will always exist between allies, into something they should not be."

On Tuesday, the EU agreed to put the dispute at the top of the bloc's political agenda.

"In the light of the discussions that are taking place right now in Europe, I think it is important to say that I experience [U.S. President Joe] Biden as very loyal to the trans-Atlantic alliance," Frederiksen told Danish newspaper Politiken on Wednesday.

Asked whether she can understand the French criticism, Frederiksen replied: "No, I cannot. I do not understand that at all."

Information for this article was contributed by Rachel Pannett of The Washington Post and by writers of The Associated Press.