Federal agencies advised to prepare for shutdown just in case 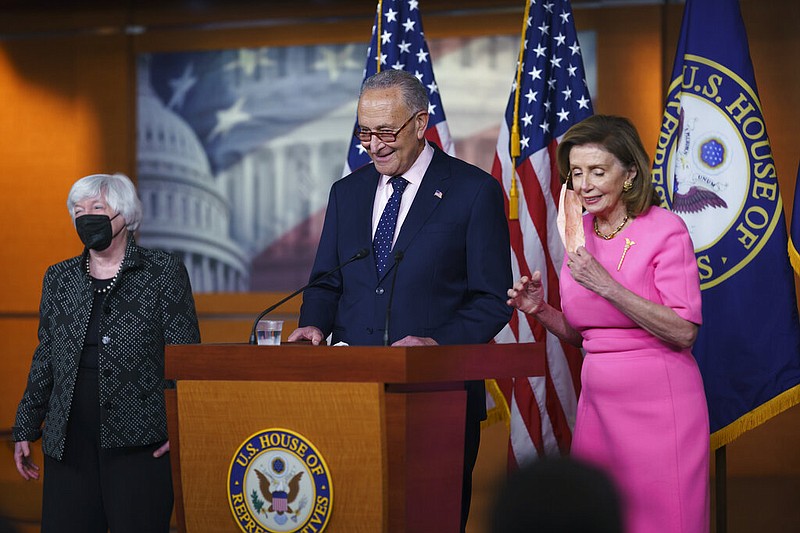 WASHINGTON -- The White House budget office notified federal agencies Thursday to begin preparations for the first shutdown of the U.S. government since the coronavirus pandemic began, as lawmakers on Capitol Hill struggle to reach a funding agreement.

Administration officials stress the request is in line with traditional procedures seven days ahead of a shutdown and not a commentary on the likelihood of a congressional deal. Both Democrats and Republicans have made clear they intend to fund the government before its funding expires on Sept. 30, but time is running out and lawmakers are aiming to resolve an enormous set of tasks in a matter of weeks.

House Democrats earlier this week approved a measure to fund the government, suspend the debt ceiling and approve emergency aid such as disaster relief. But that plan is expected to die in the Senate amid GOP refusal to support Democratic attempts to lift the debt ceiling.

With the first of two major deadlines looming next week, Democrats publicly maintained the current course, pledging to put the House-backed bill before the Senate that would fund the government into December and allow the country to borrow freely throughout most of 2022.

"Every single member of this chamber is going to go on record as to whether they support keeping the government open and averting a default, or support shutting us down and careening our country toward a first-ever default," Senate Majority Leader Charles Schumer, D-N.Y., said to open debate on the chamber floor.

[Video not showing up above? Click here to watch » arkansasonline.com/924social/]

Privately, though, Democrats also began to acknowledge they are unlikely to prevail in the face of a GOP blockade. Democrats have started discussing the mechanics of how to sidestep Republicans as soon as next week, according to lawmakers and aides, as they maintain they will not allow the government to shut down in a pandemic or the country to default for the first time in history.

"We're looking at all the options, but a government shutdown is not acceptable," said Sen. Chris Van Hollen, D-Md., a member of the chamber's budget committee.

Many government functions are financed through spending bills that must be approved by Congress, including everything from the military to education programs, before one fiscal year ends and the next begins. Alternatively, lawmakers can pass short-term measures that sustain existing funding to buy themselves time. Absent that, the money runs out, resulting in a full or partial shutdown.

IN MIDST OF PANDEMIC

Missing the deadline doesn't bring all government operations to an immediate halt, but it does require perhaps hundreds of thousands of federal employees to go home without pay. And many of the government employees who continue working because they are deemed "essential" will not be paid until Congress approves a new funding measure.

Then-President Donald Trump presided over the longest shutdown in U.S. history, a 35-day lapse that didn't end until late January 2019. During that shutdown, Coast Guard families were told to consider holding garage sales to bring in extra income while they waited to be paid. Other federal employees sold personal belongings online to try to raise cash so they could pay their bills.

Trump held out for more than a month, demanding that Congress approve money to build a wall along the border with Mexico, but Democrats held firm. Trump eventually backed down when some air traffic controllers refused to work without pay, delaying flights and triggering anger.

The implications for a shutdown during a health pandemic, however, could be much different. Parts of the Centers for Disease Control and Prevention and the National Institutes of Health could even close if funding lapses, according to Bill Hoagland, a senior vice president at the Bipartisan Policy Center and former Republican staff director for the Senate Budget Committee. Hoagland said a very brief shutdown may occur but said he doubted it would go on for "any length of time" because of the implications.

"This would be the first shutdown during a declaration of national emergency," Hoagland said. "In the midst of an ongoing pandemic and non-resolved issues related to the delta [variant of the] virus, to have a shutdown of some of the major federal agencies would add unbelievable complications to our ability to recover."

In a sign of the new scramble to avoid a shutdown, the Senate's two top appropriators -- Chairman Patrick Leahy, D-Vt., and top Republican Richard Shelby of Alabama -- met Thursday to discuss issues potentially including a short-term agreement to keep the government funded. Such a measure could be moved independently of an increase in the debt ceiling, since Republicans including Senate Minority Leader Mitch McConnell of Kentucky have previously expressed an openness to supporting such a solution.

But no such deal appeared in the offing, leading the White House Office of Management and Budget to notify agencies to review and revise their emergency plans for a shutdown.

"We fully expect Congress to work in a bipartisan fashion to keep our government open, get disaster relief to the Americans who need it, and avoid a catastrophic default, especially as we continue to confront the pandemic and power an economic recovery," said Abdullah Hasan, an Office of Management and Budget spokesman, in a statement. "In the meantime, prudent management requires that the government plan for the possibility of a lapse in funding. Consistent with long-standing practice across multiple Administrations, [the Office of Management and Budget] is preparing for any contingency, and determinations about specific programs are being actively reviewed by agencies."

Speaking independently to reporters Thursday, House Speaker Nancy Pelosi, D-Calif., and Schumer announced that they had reached a framework agreement with the White House over how to pay for Democrats' $3.5 trillion tax-and-spending measure.

But they did not provide many details, and even if the outline is satisfactory, Democrats still face the daunting task of narrowing the menu to tax possibilities they can find support for to fund President Joe Biden's $3.5 trillion plan.

Democrats are struggling to advance several spending measures all at once. In addition to the potential shutdown and debt ceiling problems, they have labored to advance twin economic initiatives backed by Biden, including a package set to go before the House next week that aims to improve U.S. infrastructure. The proposal is tied to a second, roughly $3.5 trillion bill that aims to rewrite tax-and-spending priorities to expand programs for Americans of all ages, while boosting efforts to tackle income inequality and fight climate change.

Staring down a self-imposed Monday deadline, lawmakers said they would work nonstop to find agreement on specifics. Democrats' views on those vary widely, though they largely agree with Biden's idea of raising taxes on corporations and the wealthy to fund the package.

Biden has been putting his shoulder into the negotiations, inviting more than 20 of his party's moderate and progressive lawmakers to the White House for lengthy meetings this week. He's working to close the deal with Congress on his "Build Back Better" agenda at a time when his presidential campaign promises are running into the difficulty of actually governing.

But the party has been divided over many of the details.

Moderate Democrats, most prominently Sens. Joe Manchin of West Virginia and Kyrsten Sinema of Arizona, are demanding that the huge dollar total be reduced. The revenue options to pay for it -- that mostly means taxes -- being considered can be dialed up or down, the leaders say. The ultimate price tag may certainly slip from the much-publicized $3.5 trillion.

Republicans are solidly opposed to the package, calling it a "reckless tax-and-spending spree." So Democrats will have to push it it through Congress on their own, which is only possible if they limit their defections to a slim few in the House and none in the Senate.

"We're proceeding," Pelosi said. "We intend to stay the course and pass the bill as soon as possible."

The congressional leaders huddled early Thursday with the chairmen of the tax-writing committees to agree to the framework, pulling from work already being done on those panels. They are intent on sticking to Biden's pledge not to raise taxes on people making less than $400,000 a year.

Rep. Richard Neal, D-Mass., the chairman of the House Ways & Means Committee, has already drafted his version, which would raise about $2.3 trillion by raising corporate tax rates to 26.5% for businesses earning more than $5 million a year and increasing the top individual tax from 37% to 39.6% for those earning more than $400,000, or $450,000 for married households.

The House panel's bill also includes a 3% surtax on the adjusted incomes of people making more than $5 million a year.

The Senate Finance Committee under Sen. Ron Wyden, D-Ore., has not yet passed its bill, but has been looking at proposals that further target the top income earners, including efforts to curtail practices used to avoid paying taxes.

"I'm not going to get into any specific stuff today, but I've made it very clear as chairman of the Finance Committee a billionaire's tax will be on the menu," Wyden said.

Those tax goals align with the Biden administration, which is marshaling arguments that the increases are fundamentally about fairness at a time of gaping income inequality.

According to a new analysis released Thursday by the White House, the wealthiest 400 families, worth more than $1 billion, paid an average tax rate of just 8.2% between 2010 and 2018. Treasury Department tables show that is lower than the average tax rate of families with an income of roughly $142,000.

The analysis suggests two clear reasons why billionaires pay a lower rate than the upper middle class: They derive income from stocks, dividends and other assets that are taxed at lower rates and they can permanently avoid paying tax on certain investment gains that by law are excluded from taxable income.

Without divulging a framework, Wyden indicated he is in agreement with the House's plans for certain retirement savings accounts used by the top earners to shield liabilities.

Targeting "Mega IRAs," Democrats hope to correct what they see as a flaw in the retirement savings system enabling billionaires to amass millions in independent retirement accounts without ever paying taxes. Under some proposals, individuals earning beyond $400,000 would be barred from contributing to their IRAs once their account balances top $10 million.

The Biden administration also has shown interest in one climate-change tax -- a so-called pollution importer fee, which would essentially impose a tariff on goods coming from countries without certain emissions controls -- and seen as a way to pressure China.

Gaining less traction seems to be a carbon tax that could fall on households and stray from Biden's pledge not to tax those earning less than $400,000.

Another big unknown: Whether Democrats can coalesce around a plan to rein in prescription drug costs, which could save the government hundreds of billions that could be used for Biden's goals

Thursday's sudden announcement of framework options caught key lawmakers off guard, including Sen. Bernie Sanders, I-Vt., the chairman of the Budget Committee, and others playing leading roles in assembling one of the biggest bills Congress has ever attempted.

Schumer later acknowledged about the emerging framework -- "it's hardly conclusory, but it was a good step of progress."

Information for this article was contributed by Tony Romm, Jeff Stein and Mike DeBonis of The Washington Post and by Lisa Mascaro, Alan Fram, Marcy Gordon and Josh Boak of The Associated Press.