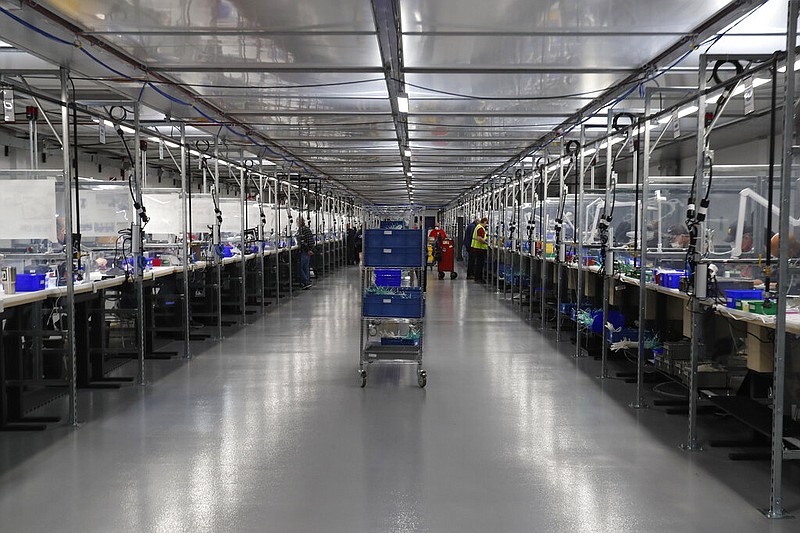 Work stations in the Ford Rawsonville plant in Ypsilanti Township, Mich., are shown in this May 13, 2020, file photo. An area of the plant was converted into a ventilator factory last year, as hospitals battling the coronavirus reported shortages of the life-saving devices. (AP/Carlos Osorio)

The count of state cases rose by 1,540, the ninth daily increase in a row that was smaller than the one a week earlier.

Arkansas' death toll from the virus, as tracked by the Department of Health, rose by 20, to 7,548.

"I think overall we're moving in a good direction," Jennifer Dillaha, the Health Department's chief medical officer, said, referring to indicators such as the decline in hospitalized patients and a drop in the number of cases that were considered active.

But she said she still recommends Arkansans, especially those who aren't vaccinated, continue taking precautions such as avoiding crowds and wearing masks while in public.

"I don't want us to back off those precautions at all right now," Dillaha said.

"I think that would be premature, and it could result in an increase in our number of cases, which is exactly what we don't want to happen."

Booster shots, recommended on Thursday by an advisory committee to the U.S. Centers for Disease Control and Prevention for certain people who received their second dose of the Pfizer vaccine at least six months ago, could help push Arkansas' new cases and hospitalizations down even further, Dillaha said.

According to the Health Department's online coronavirus dashboard, 12.2% of state cases, 10% of its hospitalizations from covid-19 and 12.4% of its deaths from the virus since Feb. 1 have been among people who were fully vaccinated.

"I'm thinking that it will make a difference for a significant number of people," Dillaha said.

Of the cases in the state that were active on Thursday, 17.1% were among people who had been fully vaccinated.

The committee recommended the Pfizer boosters for people who are 65 or older, residents of long-term care facilities and adults with medical conditions putting them at risk for severe covid-19.

If the CDC adopts the committee's recommendation, Dillaha said Arkansas providers could start administering the boosters as soon as today.

She recommended that people who want the shots wait until Monday to allow providers to "modify their processes and get everything ready."

Gov. Asa Hutchinson, who is 70 and received his first dose of Pfizer vaccine in January, was among those who planned to get a third shot.

"I study the national and global COVID-19 trends & this virus has some very unpredictable elements," Hutchinson said in a tweet.

"We know vaccines are our most effective tool & that is why I am ready to get a booster shot when we get final CDC approval."

Third doses of the Pfizer and Moderna vaccines were authorized last month for certain people with compromised immune systems.

Federal officials are still reviewing data on whether others who have received two doses of Moderna should get a booster.

Johnson & Johnson has not yet submitted an application for authorization of a booster for its single-shot vaccine.

Because it's easier than Pfizer to ship and store, the Moderna vaccine has been used in most Arkansas long-term care facilities, said Rachel Bunch, executive director of the Arkansas Health Care Association, which represents nursing homes.

She said plans were in the works to administer boosters at facilities that used Pfizer.

Some residents with compromised immune systems have already received third doses of Pfizer or Moderna, she added.

She said 85.3% of the state's nursing home residents and 66.6% of workers at the facilities had been fully vaccinated as of Thursday.

Already at its lowest level since July 25, the number of covid-19 patients in Arkansas hospitals fell Thursday by 11, to 956.

The number of virus patients on ventilators fell by two, to 254, its lowest level since Aug. 6.

The number in intensive care fell by the same, to 414, its lowest level since July 31.

Down significantly from their all-time highs last month, all three indicators were also below the peaks they reached in January during the state's winter surge: 1,371 for the number hospitalized, 268 for the number on ventilators and 458 for the number in intensive care.

The number of intensive care beds that were unoccupied statewide rose Thursday by 10, to 75, with covid-19 patients continuing to make up about 38% of all patients in intensive care.

UAMS Medical Center in Little Rock had 34 covid-19 patients on Thursday -- less than half the all-time high of 75 reached in July.

She said eight of the 34 patients had been fully vaccinated.

Despite the decline in covid-19 patients, Chase said a 20-person Army medical crew that arrived at the hospital earlier this month was still needed to help fill staffing gaps and was expected to stay on for its full 30-day assignment.

Vacancies, illnesses and quarantines from exposure to covid-19 have also created a shortage of custodial workers at UAMS, prompting Chancellor Cam Patterson to announce in an email to employees this week that housekeeping services will be limited in nonclinical areas of several buildings for at least the next two months.

Workers in those buildings will be responsible for tasks such as taking out their own trash, dusting, vacuuming, and cleaning bathrooms in individual offices.

Housekeepers will continue to remove trash from central locations and clean public restrooms, classrooms and laboratory spaces, Patterson said in the email.

"Thank you to everyone in the areas listed above for stepping up to help," he said.

"This will allow us to ensure that we have the housekeeping support needed to continue providing the safest care possible for our patients."

Hospitals in Washington and Benton counties had 82 covid-19 patients, down from an all-time high of 173 on Aug. 11, Martine Pollard, a spokeswoman for Mercy Hospital Northwest Arkansas in Rogers, said in a statement.

She said about 94% of the patients were not vaccinated. Those that were vaccinated were elderly or had "debilitating health conditions," she said.

"High volumes of unvaccinated COVID-19 patients and of critical care patients continues to place an extreme burden on our region's hospitals and the health care providers we rely upon to treat non-COVID-19-related illnesses and conditions, along with COVID-19," Pollard said.

The increase in cases on Thursday was smaller by 284 than the one the previous Thursday.

As a result, the state's average daily case increase over a rolling seven-day period fell to 1,275, dropping below 1,300 for the first time since July 22.

With recoveries and deaths outpacing new cases, the number of cases in the state that were considered active fell by 213, to 13,501, the smallest number since July 22.

It was the 12th day in a row the active case total had fallen.

Active cases also continued falling among students and employees at Arkansas' elementary and secondary schools and colleges and universities.

At public school districts and charter school systems, the number of cases that were considered active fell by 171, to 2,665, from Monday to Thursday, according to Health Department reports.

The number of districts with at least five active cases fell by 13, to 152.

The Springdale School District, the state's largest by enrollment, continued to have the largest active case total on Thursday, although its number fell by one, to 93.

Active cases at colleges and universities fell by 93, to 406.

The University of Arkansas, Fayetteville, continued to have the highest total, although it fell from 138 on Monday to 111 on Thursday.

Harding University in Searcy continued to have the second-highest total, with its number dropping from 60 to 39.

Arkansas Tech University in Russellville had the next highest total, 22, on Thursday.

At private elementary and secondary schools, the number of active cases fell by seven, to 66.

The Arkansas Center for Health Improvement said in a weekly report Thursday that 147 school districts had 50 or more new cases per 10,000 residents within their boundaries over a two-week period, down from 161 a week earlier.

The cases include those among residents of the district, excluding cases among incarcerated people and residents of nursing homes and human development centers.

The center also reported that the number of districts in the state where at least 50% of residents had been fully vaccinated rose from three to five, with the Fountain Lake and Pulaski County Special districts joining the Bentonville, Cleveland County and Magnet Cove districts in reaching the benchmark.

In its daily coronavirus report, the Little Rock School District said two students had tested positive in the 24-hour period ending at 3 p.m. Thursday, and nine others had been required to quarantine after being near someone who tested positive.

Statewide, no new shifts to virtual education stemming from virus cases or quarantines had been reported this week as of Thursday, Kimberly Mundell, a spokeswoman for the Department of Education's Division of Elementary and Secondary Education, said.

According to rankings on Thursday by the CDC, Arkansas' number of new cases per 100,000 residents in the seven-day span ending Wednesday was the country's 22nd-highest, down from the 21st-highest the week ending Tuesday, as it fell from 320 to 305.

In new deaths per 100,000 residents, Arkansas fell from having the 10th-highest rate to the 11th highest.

The next highest rates the week ending Wednesday were in West Virginia, Georgia, Louisiana, Idaho, Texas, Oklahoma, Wyoming and Kentucky.

Dillaha said all but three of the deaths reported Thursday happened within the past month.

Of the others, two happened earlier in August, and one was in July.

She said 9% of the state's coronavirus tests were positive during the seven-day span ending Wednesday, the same percentage that was initially reported for the week ending Tuesday.

Hutchinson has said that he wants to keep the percentage below 10%.

The number of those patients who have ever been on a ventilator rose by 17, to 2,661.

Meanwhile, the pace of vaccinations in the state continued slowing.

At 5,119, the increase in the vaccine doses that providers reported having administered, including second and third doses of the Pfizer and Moderna vaccines, was smaller by more than 1,900 than the one the previous Thursday.

The average number of doses administered each day over a rolling-seven day period fell to 5,745, dropping below 6,000 for the first time since July 16.

According to the CDC, the number of Arkansans who had received at least one vaccine dose rose Thursday by 2,118, to 1,669,614, representing about 55.3% of the state's population.

Among the states and District of Columbia, Arkansas continued to rank 37th in the percentage of its residents who had received at least one dose and 42nd, ahead of Louisiana, Tennessee, Georgia, North Dakota, Mississippi, Alabama, Idaho, Wyoming and West Virginia, in the percentage of fully vaccinated.

Nationally, 64% of people had received at least one dose, and 55% were fully vaccinated.