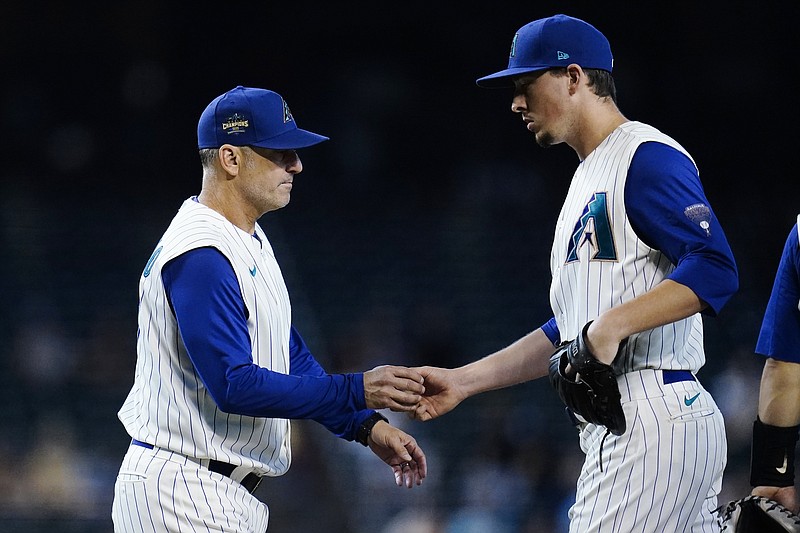 Toronto Blue Jays reliever Ryan Borucki has been suspended for three games by Major League Baseball for intentionally hitting Tampa Bay's Kevin Kiermaier with a pitch in the latest salvo in a spat between the two AL East competitors. MLB announced the punishment, which includes an undisclosed fine, on Thursday before the Blue Jays began a four-game series at Minnesota. Manager Charlie Montoyo was also suspended for one game and handed an undisclosed fine. He served his punishment immediately. Borucki appealed the decision by MLB senior vice president Mike Hill, delaying the discipline until completion of the process before MLB special adviser John McHale Jr. Borucki was ejected from the game after plunking Kiermaier in the back in the eighth inning on Wednesday. That came two days after Kiermaier scooped up a Toronto scouting report that had fallen off catcher Alejandro Kirk's wristband during a play at the plate and refused to hand it back.

With a little over a week left in the season and his team tied for the worst record in the major leagues at 48-104, Arizona Manager Torey Lovullo was given a one-year contract extension through 2022. The deal announced Thursday includes a club option for 2023, according to General Manager Mike Hazen. Arizona had lost 14 of 17 entering Thursday and was tied with Baltimore. Lovullo, 56, replaced Chip Hale as Arizona's manager after the 2016 season and was voted NL Manager of the Year in 2017.

Kahleah Copper scored 23 points, Candace Parker grabbed 15 rebounds and the Chicago Sky beat the Dallas Wings 81-64 in a first-round WNBA playoff game on Thursday night in Chicago. Parker finished with 11 points, 7 assists and 3 steals for the sixth-seeded Sky. ... Sophie Cunningham hit 6 of 9 three-pointers for a career-high 21 points and Brianna Turner made the winning free throw with less than a second to play, giving the Phoenix Mercury an 83-82 win over the New York Liberty. The upstart Liberty had tied the game on Betnijah Laney's long three-pointer with 2.7 seconds left, but the Mercury got the ball to Turner underneath the basket on the ensuing inbounds play, forcing Sami Whitcomb to foul with 0.4 seconds remaining. Turner's first free throw rimmed out but she calmly made the second. Phoenix will play another single-elimination game at fourth-seeded Seattle on Sunday. Skylar Diggins-Smith led Phoenix with 22 points

A former St. John's assistant coach is suing the university and Coach Mike Anderson, claiming he was fired because of a health issue. Steve DeMeo said in a lawsuit he was let go in June after telling Anderson about a serious heart condition that necessitated work accommodations due to the pandemic and would likely require additional procedures and medical leave. Previous to that, DeMeo asserts in the suit, Anderson had only praised his job performance. The lawsuit, filed Thursday by Wigdor LLP in U.S. District Court, alleges DeMeo's dismissal violated the Family and Medical Leave Act, along with New York human rights and labor laws. Anderson, who was the University of Arkansas head coach from 2011 to 2019, was the Big East Coach of the Year last season and received a six-year contract extension from St. John's in May after leading the Red Storm to a 16-11 record.

Monomoy Girl, a champion who won the Breeders' Cup Distaff and Eclipse Award as a filly and mare in a stellar racing career, has been retired after sustaining an injury at Churchill Downs. Spendthrift Farm, part of an ownership group that included My Racehorse and Madaket Stables, announced on its web site that Monomoy Girl was injured Tuesday while training at the storied track. Trainer Brad Cox said the seven-time Grade 1 winner came back "a little off" on her right front leg following a routine gallop. X-rays revealed a non-displaced fracture of the sesamoid bone. Monomoy Girl will not need surgery, Cox added, though the injury ends a dominant racing career featuring 14 wins and three seconds in 17 starts. Her achievements include the 2018 Kentucky Oaks as a 3-year-old and first Distaff victory on the way to winning the Eclipse Award as top filly. She earned $4,776,818 and just awaits her spot in the Hall of Fame. Monomoy Girl will return to Spendthrift Farm in Lexington to become a broodmare, though her breeding plans were not immediately known.

Three of the top four seeded players lost their opening matches at the Astana Open in Nur-Sultan, Kazakhstanon, Thursday, including top-seeded Aslan Karatsev. Karatsev, who reached the Australian Open semifinals this year, lost to Finnish player Emil Ruusuvuori 7-6 (6), 6-4. Third-seeded Dusan Lajovic and fourth-seeded Filip Krajinovic also lost. Ruusuvuori, who reached his first tour semifinal last year at the Astana Open, will next face eighth-seeded Ilya Ivashka in the quarterfinals. Karatsev's season has tailed off since his run at the Australian Open and winning a title in Dubai. The Russian hasn't won more than two consecutive singles matches since reaching the final at the Serbia Open in April.