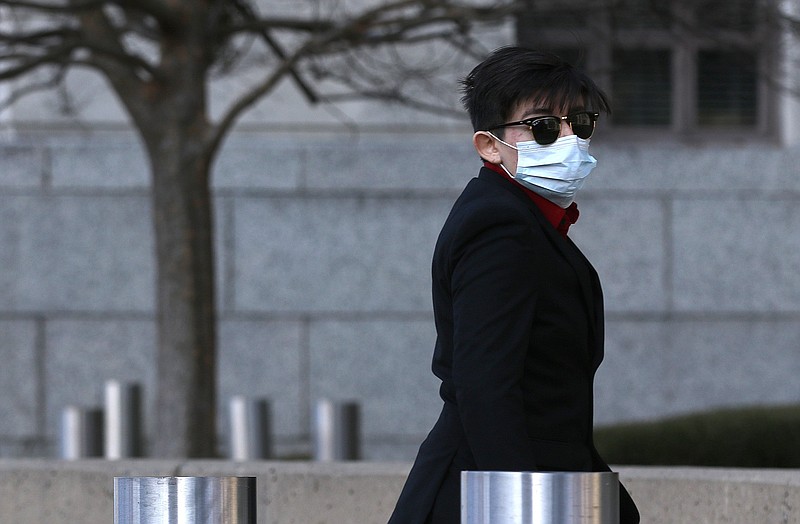 A woman indicted on federal charges in connection with last year's Black Lives Matter protests in Little Rock and North Little Rock pleaded guilty in federal court Thursday to one count of possession of an unregistered destructive device as part of a plea agreement with the U.S. attorney's office in Little Rock.

Aline Espinosa-Villegas faced four counts in connection with unrest that resulted in the firebombing of an Arkansas State Police vehicle in North Little Rock, among other incidents that occurred in and around the protests. In exchange for her plea, charges of conspiracy to maliciously damage and destroy a vehicle by means of fire, malicious damage and destruction of a vehicle by means of fire, and possession of a destructive device in furtherance of a crime of violence were dismissed by the government.

Espinosa-Villegas was accused of participating in an incident in August 2020 in which a state police 2020 Chevrolet Tahoe was destroyed by an improvised explosive device, described as a "Molotov cocktail." The vehicle was stored at One State Police Plaza Drive in Little Rock, the agency headquarters.

In addition to the burned vehicle, another was vandalized with spray paint and several others had their tires punctured.

Espinosa-Villegas was indicted in February along with Mujera Benjamin Lungaho, Brittany Dawn Jeffrey, Emily Nowlin and Renea Goddard in a 13-count indictment handed up by a federal grand jury in Little Rock.

As Thursday's hearing began, Chief U.S. District Judge D. Price Marshall Jr. noted that Espinosa-Villegas was several minutes late to the proceeding, which her attorney, David Parker, explained was because she had been held up in the probation office awaiting the result of a prehearing drug screen.

"It's very important for you to be here early so the court can accomplish everything it needs to do," Marshall said. "My old boss used to say unless you're early, you're late, so will you follow that rule from now on?"

Assistant U.S. Attorney Stacy Williams outlined the government's case against Espinosa-Villegas, saying that on Aug. 25, 2020, she met with her four co-defendants and an unindicted co-conspirator, whom Williams did not name, with the intention of joining in a demonstration to protest the killing of George Floyd the previous May by Minneapolis police. It was one of many Black Lives Matter protests that broke out around the county in the wake of Floyd's death.

"Sometime overnight," Williams said, "the plan to throw a Molotov cocktail at the Arkansas State Police headquarters was developed."

Williams said Espinosa-Villegas, Lungaho, Goddard and Nowlin were dropped off near the state police headquarters. Lungaho cut a section of the chain-link fence surrounding the property to gain entrance, and the four vandalized the vehicles, Williams said.

She said Espinosa-Villegas threw the Molotov cocktail at a police car but that it didn't explode, so Lungaho threw it at the Tahoe, setting the vehicle on fire.

In addition to a possible prison sentence of 10 years and a maximum $250,000 fine, Marshall told Espinosa-Villegas that by pleading guilty, she would be responsible for restitution for the damaged vehicles.

Asking if she understood the restitution requirement, Marshall allowed Espinosa-Villegas time to consult with Parker before entering a plea.

Upon her return, Espinosa-Villegas pleaded guilty to the charge of possession of an unregistered destructive device.

"Is this what you want to do," Marshall asked, "to plead guilty to the charge and move on?"

"Are you sure?" Marshall asked.

Marshall said sentencing will take place at a later date, and he allowed Espinosa-Villegas to remain free on bond.