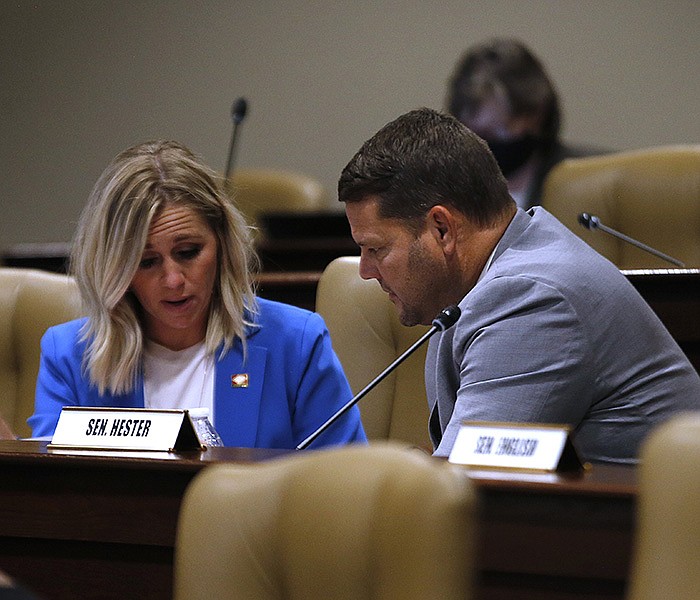 Redistricting bills that would split the state's most populous county among three congressional districts have generated conversation in the Arkansas General Assembly, though a consensus hadn't yet emerged as of Thursday.

Meanwhile, lawmakers filed another bill that would keep Pulaski County intact while adding two counties to the 2nd Congressional District.

The Legislature is set to be called into extended regular session, starting Wednesday, to reconfigure the state's four congressional districts based on data from the 2020 U.S. census.

There are 3,011,524 people living in Arkansas, according to the latest U.S. census numbers, making the ideal population for one of the state's four congressional districts 752,881.

Several redistricting proposals have emerged that would split the state's most populous county among several congressional districts. Pulaski County, which contains the capital, Little Rock, grew by 4.3% in the past decade to a population of 399,125.

It is also more racially diverse than the rest of the state as a whole. A little more than 70% of Arkansans identified solely as white in the latest U.S. census, while 49.9% people in Pulaski County identified as white alone and 36% identified as Black alone.

Additionally, it is one of the few counties that consistently votes for Democratic legislative candidates in the deep red state, as do most of the counties along the Mississippi River in northeast Arkansas, plus Jefferson and Washington counties and several other areas.

The proposals that split Pulaski County, particularly Senate Bill 721 by Sen. Bart Hester, R-Cave Springs, among different congressional districts generated the most discussion at Thursday's joint meeting of the House and Senate State Agencies and Governmental Affairs Committees, though there didn't appear to be a strong consensus among lawmakers and more proposals are expected to be filed.

"The committee has made a real effort to take into consideration all of the different parameters and general charges that are given in the process and so I believe we all will see where the ideas are and the maps are and then decide," the Senate committee chairman, Sen. Jason Rapert, R-Conway, said.

Rapert said Wednesday that this year marks the first time the GOP, which now controls the Legislature, has drawn the congressional district lines since the Reconstruction era. Redistricting takes place every 10 years, after the census.

Some Republicans praised Hester's bill for being geographically cohesive while Democrats from Pulaski County objected to it splitting up their community.

Hester said SB721 was the result of him instructing staff at the state Bureau of Legislative Research to make a map with the most cohesive districts possible while splitting as few counties as possible, and that he believed the result was fair and advantageous to all Arkansans.

"That's it. No more personal bias, no 'my colleague wants this,'" he said.

He said there were "significant amounts of gamesmanship" when the Arkansas Legislature, which was then controlled by Democrats, redrew the lines based on the results of the 2010 census.

He said splitting the state's most diverse and populous county, which is also in the center of the state, was the easiest way to level out the four districts in terms of population.

Sen. Mat Pitsch, R-Fort Smith, said he liked that Hester's map was based on counties not being divided, but asked if he would support one that keeps every county whole. Hester said he wasn't sure that was possible to draw a realistic map without splitting one or more counties.

Sen. Trent Garner, R-El Dorado, praised the map while contrasting it with the current lines.

"Once you see what a fair and equitable map looks like, you kind of realize the situation we've been in Arkansas for the last 10 years with the gerrymandering of 2011. This Pulaski County split is logical, as in it's in the center of the state, and it's fair as in it is a county that is growing in population by year," he said.

Sen. Joyce Elliott, D-Little Rock, said she was trying to figure out if the map was a serious proposal. She said she was concerned that lawmakers would go down a path of "getting back of something we don't like from 10 years ago."

"Don't you think we can do better than that?" she said.

Hester acknowledged he had colleagues on both sides of the aisle who were against his proposal.

Sen. Clarke Tucker, D-Little Rock, noted that SB721 splits Little Rock between congressional districts, which he found objectionable. Hester said he would be open to drawing the line along the Arkansas River instead, keeping the city whole.

Asked by Tucker what his rationale was behind splitting the county three ways, Hester joked that it was because he couldn't figure out a way to split it into four.

Sen. Linda Chesterfield, D-Little Rock, said she was concerned about splitting any county because people might not know which congressperson to reach out to about issues.

Rapert asked whether Hester thought it could be an advantage for the county to have multiple members of Congress representing it. Hester said he believed it could be.

Three members of the public spoke against SB721. Two who were from the Arkansas Delta, Desha County Judge Richard Tindall and former Lincoln County Judge Charles Capps, asked that their counties remain in the 1st Congressional District.

Tindall said districts should follow like interests, including agricultural ones. He said there was a problem with basing maps on geography and that they should instead be attuned to "what works for different counties as much as possible," including putting areas with similar agricultural interests in the same districts.

Richelle Brittain, a Jacksonville resident, said she was shocked by SB721 and that it appeared to be aimed at "divvying up the power base of a certain political party."

"Whatever happened to communities of interest?" she asked.

Rapert also presented Senate Bill 722 and Senate Bill 723 on behalf of Sen. Alan Clark, R-Lonsdale, who was out of state. Clark said Wednesday that his maps came from a similar starting point as Hester's but are closer to the current congressional district lines.

Clark's two bills are the same except one proposes including Saline County in the 2nd Congressional District while the other proposes placing Pope County in that district.

Another map, House Bill 1962 by Rep. Reginald Murdock, D-Marianna, doesn't split any counties and would create a new version of the 2nd Congressional District by putting Pulaski County with southeast Arkansas.

He said it would create a more competitive district and keep communities with similar interests together.

James Valley, a Helena-West Helena resident, spoke in favor of the proposal, noting that there hadn't been much talk about racial minorities. He said lawmakers should think about not splitting up Black voters.

Among the proposals set to be heard when the committee meets next starting at 1 p.m. Monday is House Bill 1963 by Rep. Jim Dotson, R-Bentonville, and Sen. Breanne Davis, R-Russellville.

That bill would add Pope and Cleburne counties to the 2nd District while leaving Pulaski County whole and dividing Saline County between the 2nd and 4th districts.

Davis said Thursday before the bill was filed that she and Dotson were aiming to get the support from a majority of lawmakers while keeping the lines fairly close to where they are now.

She said she wanted Pope County, where she lives, in the 2nd Congressional District because it has similar interests to other communities in the Interstate 40 corridor.

Davis said she was also working on another bill that would split Pulaski County while putting Pope County in the 2nd Congressional District. That proposal had not been filed as of Thursday evening.

"I think the goal should be to split as few counties as possible, keep communities of similar interest together and draw the most condensed map, each congressional district that you can do," she said.