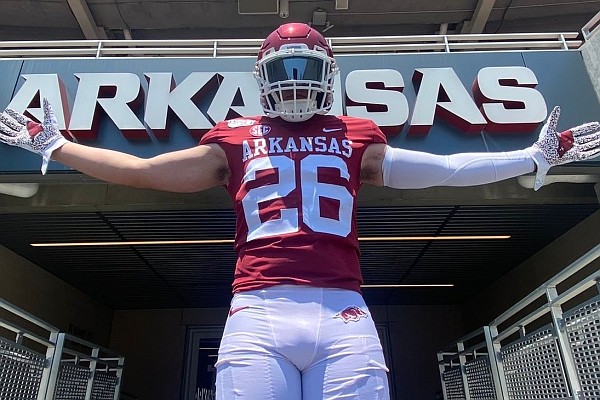 Sophomore linebacker Payton Pierce has seen Arkansas take on Texas A&M in Arlington, Texas, in the past, but Saturday will be his first time with an offer from the Razorbacks.

“I’ve gone to this game a couple of times in the past growing up, so it’s going to be super fun to watch and I’m excited to see how Arkansas does against A&M,” Pierce said. “I know A&M has been good in the past, but I really feel like Arkansas has a good shot at beating them, especially with the way they played against Texas two weeks ago.”

Pierce, 6-2, 225 pounds, of Lucas (Texas) Lovejoy, has offers from Arkansas, Virginia Tech, Missouri and Tulsa. He visited Fayetteville in late June and also watched the Razorbacks defeat the Longhorns.

He and linebackers coach Michael Scherer have developed a good bond.

Despite his youth, Pierce is a leader on the undefeated Leopards squad and a defense that has given up an average of 12.2 points in four games.

“The thing about Payton is you’re talking about a sophomore and the guy is a captain on the football field,” Lovejoy coach Chris Ross said. “He’s a leader in everything we do. He’s done that from Day 1 since he got here.”

Ross, who has more than 20 years of Texas high school coaching experience, was the director of football program development at Boise State from 2016-2017.

“Payton will play in the NFL,” Ross said. “He is an elite player athletically and mentally. He has a unique skillset and mindset.”

Pierce played as a freshman at nearby Allen High School before transferring to Lovejoy. He comes from a wrestling family, as does Scherer.

His brother wrestled at Arizona State at the same time Scherer’s brother, Daniel, wrestled at Stanford.

“They were in the same conference. I don’t think they wrestled each other,” Pierce said. “It’s pretty cool that his family has a wrestling background and so does mine. I think that’s kind of cool that we really have a good connection like that.”

Pierce, who also take snaps at quarterback in the Wildcat formation, has recorded 9 tackles for loss, 3 sacks, a forced fumble, a safety and 4 touchdowns on offense this season. He enjoy his conversations with Scherer.