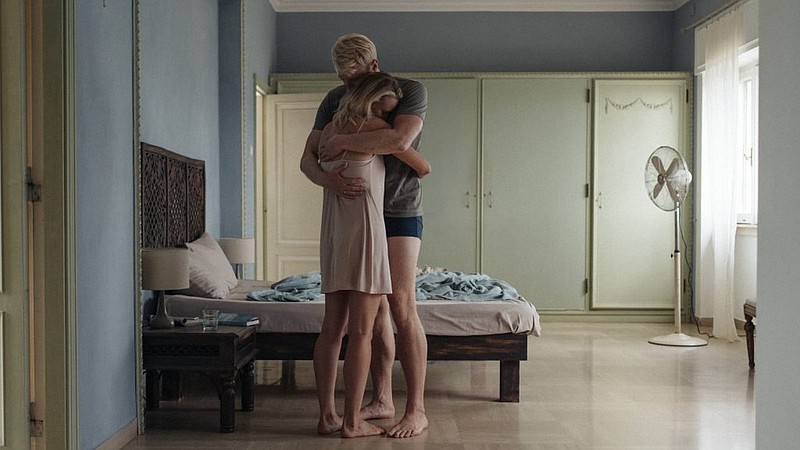 The Toronto International Film Festival has returned in near-full force. Even if the options are somewhat more limited for those not attending the festival in person, there remain plenty of intriguing possibilities to take in.

Herewith, the next batch of films from the festival's main week.

"Silent Land": A Polish couple, pale white and bloodless as cauliflower, go to a breezy Italian island for a vacation at a fabulous house on the cliffs, overlooking the ocean. Only, the elegant pool advertised in the listing isn't actually functional. Adam (Dobromir Dymecki) and Anna (Agnieszka Zulewska) insist to the owner (Claudio Bigagli) that it needs to be repaired, and, despite the village's water restriction, he reluctantly sends an immigrant handyman to fix it, causing the couple more consternation with all the noise of the repair.

When the handyman has an accident and falls backward into the nearly finished pool, smashing his head in the process, the couple do nothing to immediately help him, other than call the owner. Agnieszka Woszczynska's drama becomes a kind of moral examination of our reluctance to admit our shame -- the sort of thing Ruben Ostlund mined so adroitly in "Force Majeure," albeit to a very different effect. Instead of sweeping dramatic lamentations, or darkly comic asides, the friction between the couple begins to show in tiny ways -- Anna tells people her husband did everything he could to save the handyman, even though he clearly didn't -- Adam comes up with an excuse for his wife to tell the police that she was in "shock," when she clearly wasn't, and neither one of them seems to have a suitable reason for not helping, other than the man's presence caused them irritation.

As with all good dramas, things are messy and complicated. The couple begin to struggle with what they've done (Anna keeps insisting that they are still "good people" -- always the kiss of moral death), even if they can't actually seem to hold themselves accountable for it. Woszczynska plays her cards close to the vest -- at first, we don't even see their initial reaction, but find out about it via the security camera footage the police screen later on -- which allows for an interesting audience dynamic. By the end, it's made abundantly clear, things will never be the same for either of them, as much as they may want to assume otherwise.

"Dashcam": A midnight screening at the festival whose praises were sung immediately after the screening let out, Rob Savage's propulsive found-footage horror flick stars Annie Hardy as a livestream-besotted social media maven in L.A., always on "bandcar" (dubbed "the internet's #1 Live Improvised Music Show Broadcast From a Moving Vehicle"), essentially, a livestream for musicians to perform whilst driving (nothing could be more L.A.).

Preening and incorrigibly belittling, she's a rabid anti-vaxxing, Q-ANON adjacent hellion, more committed to sheer obnoxiousness than espousing any real political ideology. Fed up with life in the "repressed" USA, she books a flight to London, to hook up with Stretch (Amar Chadha-Patel), a former touring mate from her good ol' days on stage, who seems less than enthralled to see her.

It's not hard to see why, given her thoroughly selfish behavior (after receiving a dollop of hand-sanitizer from Stretch's live-in GF, Annie looks at the camera knowingly and smears the dab on the front of her overalls), made worse when, not wanting to deal with the couples' perfectly reasonable health restrictions, she steals his car and goes for a joyride in the city, camming all the while.

Things take a definite turn after she's persuaded, with a giant handful of Euros, to drop off a mute, elderly woman at an address given to her. Suffice it to say, the woman turns out to be neither elderly (exactly) or quiet, and Annie's night goes from awful to terrifyingly apocalyptic.

Savage, who has explained that the script was improvised based on a brief outline, has crafted a buzzy, off-kilter jump-scare factory (exactly the type of thing that would be best seen with a large crowd), as Annie and Stretch encounter wave after wave of horribleness -- eventually, the action ends up at a deserted amusement park in the dead of night -- and blood and gristle fly in all directions. Most interestingly, it also plays with our sympathies: Annie starts out about the ugliest American imaginable, but shockingly, her brand of irritating self-regard, callousness, and high threshold for chaos turns out to be incredibly useful against a surging, blood-thirsty parademon. By the end, it's impossible not to root for her -- again, pointedly, the film doesn't deal in politics as much as it does personality defects -- and the demon doesn't stand a chance.

"Compartment Number 6": Juho Kuosmanen's effort, based on the novel by Rosa Liksom, is one of those films that begins in one place and ends up somewhere altogether different. The hook is, it manages to accomplish this both metaphorically -- as we meet characters who slowly transform before us -- and literally -- as those characters travel, via interminable train car, from Moscow to Murmansk, a distance of nearly 1,200 miles.

The time is somewhere in the late '90s. Laura (Seidi Haarla), a would-be archaeology major from Finland, reluctantly leaves her older girlfriend, Irina (Dinara Drukarova), an intellectual professor, to travel up to the northern city in the Arctic Circle, in order to view the famous petroglyphs there. It was a trip they had planned to do together, but when Irina can't do it herself, she tasks Laura with going alone. In her cramped sleeper car, Laura meets the initially loutish Vadim (Yuriy Borisov), a hard-drinking young man, headed to Murmansk for mining work.

At first, with Vadim drunkenly coming at her with aggressive questions, Laura is repelled and seeks a different compartment. Over time, however, she begins to see there's perhaps more to him than pro-Russian bluster and vodka shots. At the same time, as she gets farther away from Moscow, and the intellectual scene she wanted so badly to be a part of, Laura herself begins to realize how much of her personality has been a projection of those things she wants to see in herself. What sounds like a trite set-up, in Kuosmanen's hands, becomes charming, even as the brutal harshness of the Russian winter swirls around the train -- much is made of the driving snow, and endless gray cold of the region, but to these characters, such frozen wilderness seems energizing. The only way such a storyline works is if the characters earn their benediction, and here, through the blustery days and nights of remote Russian travel conditions in the dead of winter, they most certainly do.

"Lakewood": The Triumph of the Karen. Naomi Watts plays Amy Carr, a haggard, recently widowed mother of two kids, out for a morning run in the woods near her Ontario home, when she gets word of an active shooter at her son's high school.

Miles away from town, and injured from tripping over a root -- she goes on long runs, apparently -- she has to handle everything via her phone, as she hobbles back toward town, more and more desperate, especially after she receives a call from the sheriff's department that seems to implicate her son as the perpetrator. Phillip Noyce, a veteran director of thrillers such as "Dead Calm" and "Rabbit Proof Fence," gets to empty his bag of storytelling tricks in what is, essentially, a two-character drama between a mother and her phone. There are swooping overhead shots, and handheld shots, and tracking shots, as Amy is in near-constant contact with various side characters -- her friends, a sympathetic 911 operator, a detective, a dude at a car repair shop close to the high school, a co-worker -- as she lopes her way back toward town.

It's clear we're meant to be nothing but sympathetic for this woman, experiencing the worst sort of visions of her son (He has killed innocent people?! He has himself been killed?!), but, alas, Chris Sparling's screenplay instead presents Amy as filled with the worst kind of self-important entitlement. She comes off as shrill, pushy, and oblivious to all but her immediate needs. She insists a random car mechanic leave his job and put himself at risk to investigate a cordoned-off crime scene area to look for her son; constantly ties up a 911 operator and other school officials during the midst of a crisis situation; and, worst of all, eventually manages to insert herself into the situation itself, putting literally everybody at much greater risk (though, for this one, she at least gets lightly reprimanded), all while barking on the phone in her work-out gear.

It would have been easy to turn this up just a tick and turn it into a scathing satire, but Noyce and Sparling want us to take this with utmost seriousness (including a wince-inducing epilogue during the closing credits, where a character speaks out about the ills of a gun-mad society). Apart from everything else wrong about this film, Sparling, seemingly afraid of having a single moment speak for itself, chokes the action with a constant thrum of phone-based activity, which is as exhausting as a regular work day. Toward the end, as Amy has finally gotten a ride to the high school, the beleaguered 911 operator asks her if she wants some time to herself, but, of course, she demures. "I don't want to be alone right now," she says, as if she ever had been.

Piers Marchant is a Philadelphia-based film critic and entertainment writer. A comprehensive collection of his work can be found at sweetsmellosuccess.tumblr.com/.