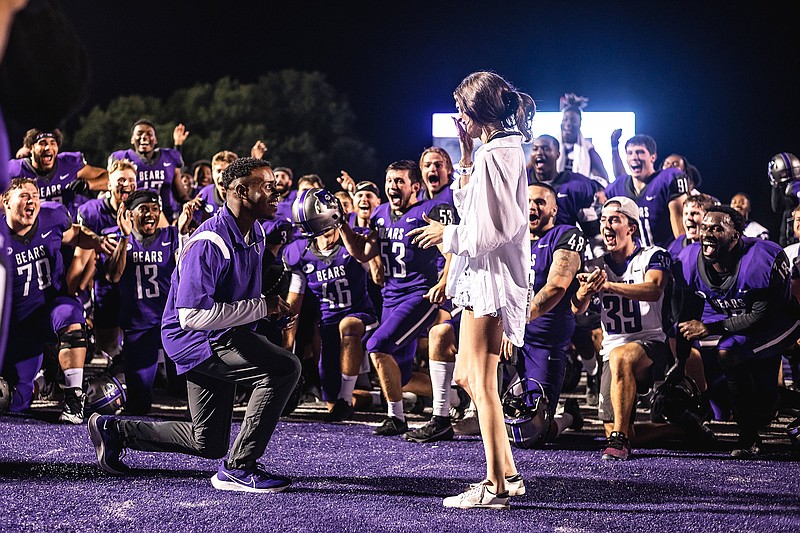 Macie Fritts was impressed with how well DeAirus Whitney, her boyfriend of five years, planned the moment, keeping the secret from her all week.

It was so well-planned that Fritts was "completely caught off-guard," she said, when Whitney got up from the postgame team huddle on Saturday following Central Arkansas' 45-23 victory against the University of Arkansas at Pine Bluff, called her over and got down on one knee to ask for her hand in marriage.

"At first I was blank," Fritts, 23, said when Whitney summoned. "I was like, 'What the heck?' Then it was just a flashback pretty much. I was like, 'OK, my nails are done. Our whole family's here. Everyone's standing here and he's in the middle.'

The proposal came together within the week, as Whitney got a call from Sissy's Log Cabin on Sept. 13 that he'd won a sweepstakes the business had for engagement rings.

After he got the call from Sissy's, he knew exactly when he wanted to propose -- following UCA's game against UAPB.

It was a hectic week for Whitney. He alerted family to come to town, coordinated with UCA's marketing team that night's postgame fireworks show would go off at the right time, got Fritts an appointment to get her nails done and sideline tickets for the game.

Of course, he downplayed it all to keep the secret, and it all worked out, with the couple getting to share the crescendo of their week with friends, family and the UCA football team.

Whitney's someone who's "just all in" in the way he approaches life, Fritts said, and that goes for the way he proposed and his role on the UCA staff.

The graduate assistant first joined the Bears staff as a volunteer in spring 2020, largely working on the recruiting side as a graphic designer while finishing his degree at UCA. After graduating in the summer, Whitney had the chance to join the staff as a graduate assistant.

"I did not want to let him get away from us because I believe that much in DeAirus and what he's about and the type of coach he's going to be," UCA Coach Nathan Brown said.

Now in graduate school, Whitney is the team's defensive graduate assistant, video coordinator and he assists with recruiting the state of Oklahoma while still putting together recruiting graphics.

Brown said it's rare to have a graduate assistant who holds so many responsibilities.

"He's got a lot of talent and that helps whenever you can multitask and do a couple different things that add value to the program, because it's not just about the X's and O's in football in this day and age," Brown said. "There's so much ... and obviously he's able to do that."

"UCA is just so welcoming," Whitney said. "The coach, the majority of those guys are married, so they all get it. It was a great experience and I couldn't imagine it being any better."

FCS No. 1 SAM HOUSTON STATE at No. 25 CENTRAL ARKANSAS 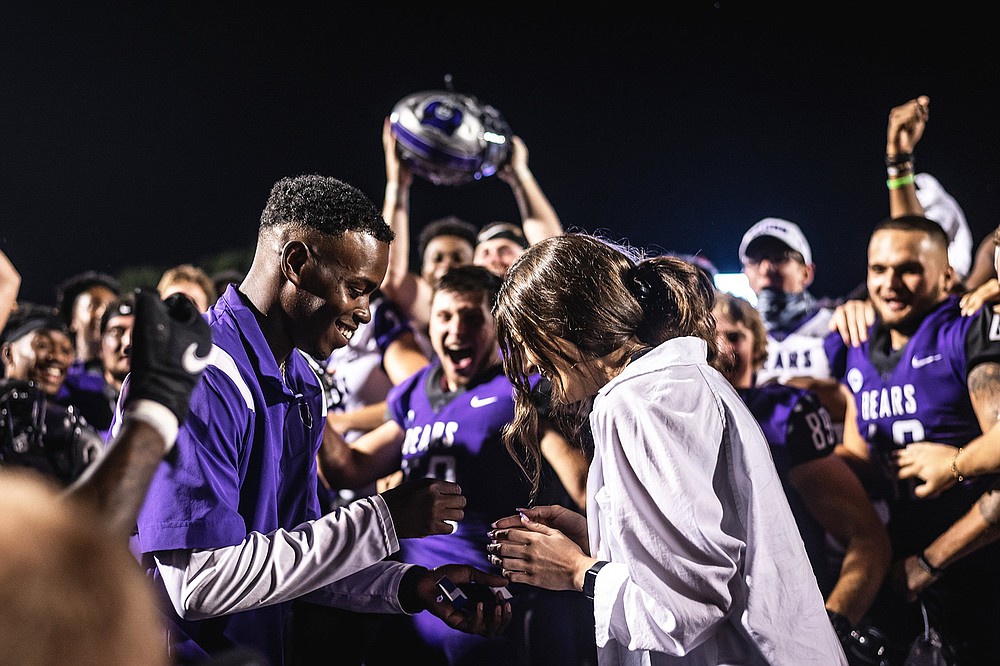 Macie Fritts takes a glance at her engagement ring after UCA graduate assistant DeAirus Whitney proposed to her at Estes Stadium in Conway on Saturday. (Photo courtesy of the University of Central Arkansas)