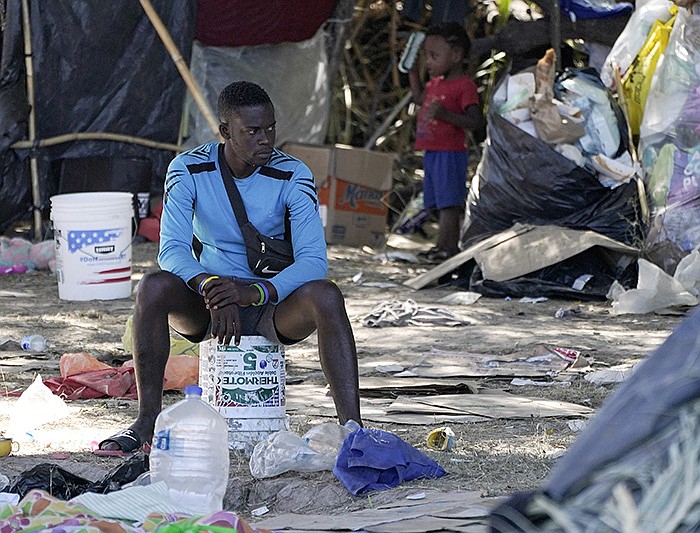 A man sits in the encampment Thursday under the Del Rio International Bridge, where as many as 15,000 migrants, many from Haiti, had been staying after crossing from Mexico into Texas. (AP/Julio Cortez)

Harshly criticizing what he called the United States' "inhumane" treatment of Haitian migrants and its policy toward Haiti, Daniel Foote -- the U.S. special envoy for the Caribbean country -- has resigned, the U.S. State Department confirmed Thursday.

In a strongly worded resignation letter dated Wednesday, the veteran diplomat criticized the U.S. decision to repatriate thousands of Haitians currently at the U.S.-Mexico border over the past few days.

"I will not be associated with the United States' inhumane, counterproductive decision to deport thousands of Haitian refugees and illegal immigrants to Haiti, a country where American officials are confined to secure compounds because of the dangers posed by armed gangs in control of daily life," Foote said.

He also lashed out at what he called "puppeteering" of Haitian politics by the U.S. and other nations.

"Last week, the U.S. and other embassies in Port-au-Prince issued another public statement of support for the unelected, de facto Prime Minister Dr. Ariel Henry as interim leader of Haiti, and have continued to tout his political agreement over another broader, earlier accord shepherded by civil society," Foote said. "The hubris that makes us believe we should pick the winner -- again-- is impressive. This cycle of international political interventions in Haiti has consistently produced catastrophic results. More negative impacts to Haiti will have calamitous consequences not only in Haiti, but in the U.S. and our neighbors in the hemisphere."

[Video not showing up above? Click here to watch » arkansasonline.com/924foote/]

A senior State Department official commenting on the resignation said Foote "sought a broader mandate and oversight responsibilities, which we did not think was appropriate or prudent at the time. He shortly thereafter submitted his resignation."

The U.S. diplomat's reputation for working in some of the world's most challenging environments made him a top pick by the Biden administration to serve as special envoy to Haiti. Foote, who had been deputy assistant secretary of state and was the former U.S. ambassador to Zambia, was appointed special envoy to Haiti in July after the assassination of the country's president, Jovenel Moise.

For weeks, he had been quietly pushing in Washington a plan to boost U.S. security assistance to Haiti to pave the way for new presidential elections. But Haiti watchers said he became increasingly disappointed with the pace of decision-making in the administration.

"When someone who is tasked with Haiti policy at the highest level resigns because 'recommendations are ignored and dismissed' it's not only troubling, but shows you this administration does not tolerate anyone who won't go along with their distorted view of the facts," said Damian Merlo, a Republican strategist who has worked for years on Haiti policy and is now a registered lobbyist for the country's government. "Dan Foote is a world-class diplomat who refuses to be told what do. I wish more foreign service officers had his courage to stand up and call out their bosses."

The State Department criticized Foote for resigning at a critical juncture and pushed back against suggestions that his policy prescriptions were overlooked.

"This is a challenging moment that requires leadership," spokesman Ned Price said in a written statement. "It is unfortunate that, instead of participating in a solutions-oriented policy process, Special Envoy Foote has both resigned and mischaracterized the circumstances of his resignation."

He added that the role of the president's advisers is to provide him with the best possible advice.

"No ideas are ignored, but not all ideas are good ideas," Price said.

Foote's resignation occurs as Haiti finds itself wrestling with a number of crises -- a proliferation of armed gangs, political volatility, low covid-19 vaccination numbers and a humanitarian crisis in the aftermath of a deadly August earthquake.

There is also the Biden administration's ongoing return of Haitian migrants from the U.S.-Mexico border and its implication for a country struggling to recover from the 7.2-magnitude earthquake along its southern peninsula during widening insecurity, spiking hunger, and social and political tensions.

[Video not showing up above? Click here to watch » arkansasonline.com/924psaki/]

Since Sunday, 12 repatriation flights have left the United States and 1,401 Haitians have been returned to Haiti. Another 3,206 have been moved from a camp in Del Rio, Texas, to U.S. Customs and Border Patrol custody or to other sectors of the United States border to either be expelled or placed into removal proceedings. There are fewer than 5,000 migrants in the Del Rio sector, a Department of Homeland Security spokesperson said.

The deportations from the camp, which held as many as 15,000 migrants at its peak, have sparked criticism of the Biden administration's U.S. policy in Haiti.

In a statement, the State Department said it was committed to working with the Haitian government and others to strengthen democracy, the rule of law, economic growth, security and the protection of human rights.

The department announced that the United States and the United Nations' immigration agency were trying to ensure that Haitians who are deported receive a meal, a hygiene kit and $100 when they land in Port-au-Prince, the Haitian capital. The officials said authorities have set up a temporary medical facility in the Del Rio, Texas, camp as well as some shelter for vulnerable groups such as pregnant women.

Anger further grew after photos and video of border patrol agents on horseback wielding what appeared to be ropes or reins while chasing some of the Haitian migrants.

On Thursday, the Department of Homeland Security reported that the horse patrol unit in Del Rio, Texas, had been temporarily suspended and that the agents' actions were being investigated. Border Patrol agents have ridden horses to enforce security since the agency was created in 1924.

Shocked by the image, Vice President Kamala Harris described what she saw as "horrible" and acknowledged that more needs to be done to help stabilize Haiti and to understand it.

"Talk about a country that has just experienced so much tragedy that has been about natural disasters, the head of state assassinated, and we really have to do a lot more to recognize that as a member of the Western Hemisphere, we've got to support some very basic needs that the people of Haiti have to get back up and to do what we want to do be them from Haiti or in the countries in Central America," said Harris, who is in charge of border issues for the administration.

White House press secretary Jen Psaki described officials as "horrified" by the images of Haitians being confronted by border agents on horseback and said the president was working to develop a "humane" immigration system.

"But we've also reiterated that it is our objective to continue to implement what is law and what our laws are, and that includes border restrictions," Psaki said Thursday.

The Department of Homeland Security had previously announced that the incident was under investigation and that the agents recorded in video footage have been placed on administrative duties.

"We'll prioritize other methods for identifying individuals who might be in medical distress," one official said during a separate briefing Thursday. Reporters were allowed to participate in the conference call on the condition that none of the speakers be named.

Border Patrol union representatives did not immediately respond to requests for comment, but they have defended the agents' conduct, which they say was consistent with their training as federal law enforcement officers.

Most of the migrants arriving in Del Rio were previously living in Brazil, Chile and other countries in South and Central America.

The officials said the U.S. State Department is urging Brazil, Chile and other nations to take back Haitian migrants who were living in those countries before attempting the journey to the United States.

They migrated there after the devastating Jan. 12, 2010, earthquake, after which the U.S. pledged to help Haiti. Since then the conditions in the country have worsened, something Foote recognized, telling a panel last month that his condition for accepting the special envoy job was that the U.S. would not be repeating the same mistakes in Haiti.

Foote's biggest challenge in Haiti, he said, was "the immediacy of the problem. The fact that any response is going to take some time." He mentioned that he was working closely with the Haiti National Police to train, invigorate and assist in setting up an anti-gang task force, a critical step in "returning the Haitian ground to its people."

"The biggest challenge I've seen in response to this earthquake is the security situation; the gangs ability to control areas of Haiti and the main road down to the south," he said. "The security situation remains a big challenge for reconstruction, for political agreement and to move forward for elections."

Challenges of his role have included strained relations with the U.S. Embassy in Port-au-Prince.

U.S. Ambassador Michele Sison has been the target of criticism from members of Haitian society. Sison is expected to depart soon after being nominated to serve in another State Department post -- and adds another critical voice to the administration's response to Haitians camped on the Texas border.

Immediately after taking the Haiti job, Foote began talking to leaders across the political spectrum as well as members of civil society, encouraging their push to reach an agreement over a transition government.

Those discussions led the Biden administration to back away from its previous position of having Haiti elections soon and acknowledge that the conditions in the country are not yet conducive for Haitians to vote.

Rep. Andy Levin, D-Mich., a chairman of the House Haiti Caucus, said the Biden administration was "propping up" the government of Henry, who was accused last week of being linked to Moise's assassination.

Henry swiftly removed the country's chief prosecutor, who had leveled the accusation, setting off a power struggle among political factions as Haitians struggle to survive. He has denied any connection to the killing.

"The Haitian people are crying out for the opportunity to chart their own country's future, and the United States is ignoring their pleas," Levin told reporters Thursday.

Henry has barely discussed the expulsions in public, saying only that his government is worried about conditions that migrants face on the U.S. border and that it will help those sent back to Haiti. Mathias Pierre, Haiti's election minister, was far more critical of the United States.

"While they're receiving [thousands] of Afghan people, they're rejecting Haitians while Haiti is in the middle of a crisis -- a crisis with the earthquake, a crisis with the assassination of the president and a poverty crisis that is clearly one of the major issues why people are leaving," Pierre said.

Information for the article was contributed by Jacqueline Charles and Michael Wilner of the Miami Herald; by Joshua Goodman, Matthew Lee, Danica Coto and Elliot Spagat of The Associated Press; by Lara Jakes and Eileen Sullivan of the New York Times; and by Nick Miroff of The Washington Post.